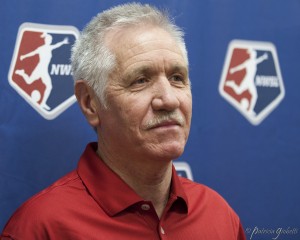 Tom Sermanni says he is interested in coaching in the NWSL. (Copyright Patricia Giobetti for the Equalizer)

Former Australia and U.S. national team coach Tom Sermanni says he is interested in coaching in the National Women’s Soccer League, but he is yet to be contacted by any teams.

“I’m definitely interested if there is interest in me,” Sermanni told The Equalizer.

Portland Thorns FC is currently without a coach after parting ways with Paul Riley last week, and a new expansion team in Orlando starting in the 2016 season is expected to be formally announced as early as this week. The Boston Breakers just hired soon to be ex-Liverpool manager Matt Beard as their new coach after parting with Tom Durkin earlier this month.

The Thorns could be close to hiring their new coach, having reportedly deciding not to pursue Sermanni and reportedly missed out on current Sweden coach and ex-U.S. coach Pia Sundhage. Sermanni said no team — including the Thorns — has contacted him.

After being abruptly fired from his post as U.S. coach in April 2014, Sermanni most recently served as John Herdman’s assistant for the Canadian women’s national team prior to and during the World Cup. Sermanni, 61, says that could be a potential option moving forward as well. Sermanni is based in the United States and has a green card.