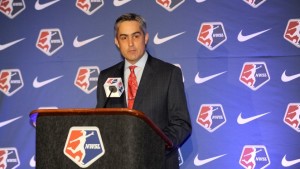 National Women’s Soccer League commissioner Jeff Plush says the United States is a “uniquely positioned” destination for a global women’s club competition, and that the league is “exploring” the possibility of hosting one.

In February, FIFA’s Task Force for Women’s Football proposed a FIFA Women’s Club World Cup to determine the best team on the planet. A beginning date of 2017 was proposed for the competition.

The men’s FIFA Club World Cup was founded in 2000 but not played again until 2005. It has been played every year since then, with different host countries. Japan will host the tournament this year for a record seventh time. Most teams qualify for the Club World Cup by winning their continental competition.

Adding a Women’s Club World Cup is viewed by the Women’s Task Force as the next step forward in the progression of women’s soccer — particularly at the club level. This year’s Women’s World Cup was the first to feature 24 teams, up from 16.

The financial and cultural impact of a global club competition isn’t lost on Plush, who is completing his first season as NWSL commissioner.

“It’s certainly an area that we’ve been exploring and excited about what the future might hold there,” Plush said Thursday.

Plush previously spoke to The Equalizer in August about creating more signature events for the NWSL, a process he is starting by moving the championship match to a predetermined site to create an event larger than just the match. Plush told The Equalizer that the league is looking at “other events that make sense, whether that is in-season or postseason.”

There is already an informal women’s club championship — the Nestle Cup, originally known as the Mobcast Cup — which has been played in Japan since 2012. Lyon won the 2012 edition and INAC Kobe Leonessa won the 2013 competition. Copa Libertadores winners São José of Brazil won the 2014 edition.

Seattle Reign FC coach Laura Harvey spoke highly of the idea of a global club competition and was supportive of the idea of the U.S. hosting it. Harvey saw first-hand the value of playing international competition in her first season as coach. The Reign went to Japan on a preseason trip in 2013 to play league champions INAC Kobe Leonessa, a trip that eventually brought Nahomi Kawasumi and Beverly Yanez to the Reign in 2014.

“That was one of the first things I ever spoke to Jeff about,” Harvey said about an international women’s club competition. “The way that our season is set up I think there is a possibility for teams to have an opportunity. It could be an opportunity in the long-term that we can take advantage of hosting within the U.S. I think it’s a huge opportunity for the teams and also for the players to pitch themselves against whether it be Japan’s best or Europe’s best or Germany’s best or England’s best, just to see where we’re truly at. Because I think it’s always a question mark of how our teams will compete against other teams across the world.

“It’s something obviously the MLS incorporate into their season to get big name clubs over to compete. For me it would be a great opportunity for the players to showcase themselves against players that they might never get a chance to play against. Also from a coaching standpoint one of the hardest games we ever played was probably that first-ever game playing against INAC in Japan. So if all the little bits could fit together and timing could work, my personal opinion would be that it is a huge opportunity for sure.”

About 10,000 tickets sold for NWSL Championship
Sermanni interested in NWSL; hasn’t been called