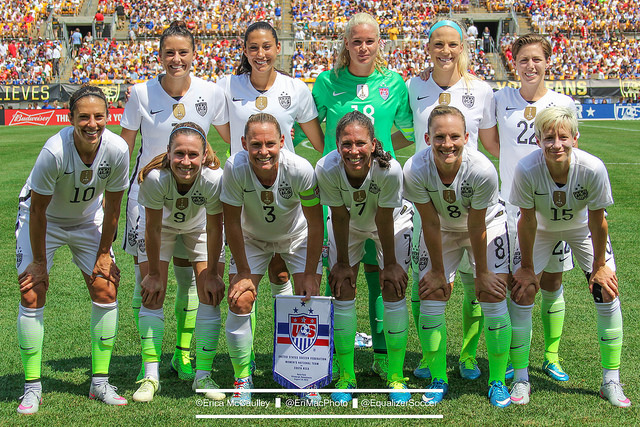 The U.S. is back in action with two matches against Haiti. (Photo Copyright Erica McCaulley for The Equalizer)

The United States women’s national team’s World Cup victory tour resumes on Thursday when the Americans host Haiti at Ford Field in Detroit (7 p.m. ET, FS1) in the first of two matches this week. The two teams will play again on Sunday in Birmingham, Ala. (2:30 p.m. ET, ESPN2).

Australia was the original opponent for the pair of matches, but the Australian federation had to cancel plans for the matches after Matildas players went on strike in the latest move regarding a new collective bargaining agreement. The Matildas players are currently out  of contract with their federation.

For the U.S., that means what could have been a pair of very competitive games will more than likely be cakewalks similar to the two that saw the U.S. open the tour last month — 8-0 in Pittsburgh and 7-2 in Chattanooga, Tenn. Haiti knows this, but coach Shek Borkowski will use these matches as learning opportunities for his team as he most looks to build toward 2019 World Cup qualifying. Haiti will not be at the final round of CONCACAF 2016 Olympic qualifying after losing a four-team Caribbean Zone qualifying group to Puerto Rico.

The Americans are unbeaten in their last 98 matches at home (86-0-12), dating back to 2004. It’s an astonishing streak which includes world giants and minnows alike, and it now looks set to reach the century mark. After the two matches against Haiti, the U.S. women get back together for two games against Brazil in October, when that record home unbeaten streak — assuming it still stands — will really be put to the test.

Most notable for the U.S. against Haiti is the addition of NWSL Golden Boot winner Crystal Dunn. Otherwise, the 23 players who won the World Cup will make up the roster, with Christen Press missing the second match for a family commitment.

Sydney Leroux remains sidelined following ankle surgery in July, but U.S. Soccer says she is “likely to be available for the USA’s October matches.”

Tobin Heath became the 33rd U.S. player to reach 100 caps for the team in its second victory over Costa Rica. She will be honored for that feat at the second match in Birmingham. Alex Morgan has 92 caps and Becky Sauerbrunn has 89 caps.

Below are the rosters: