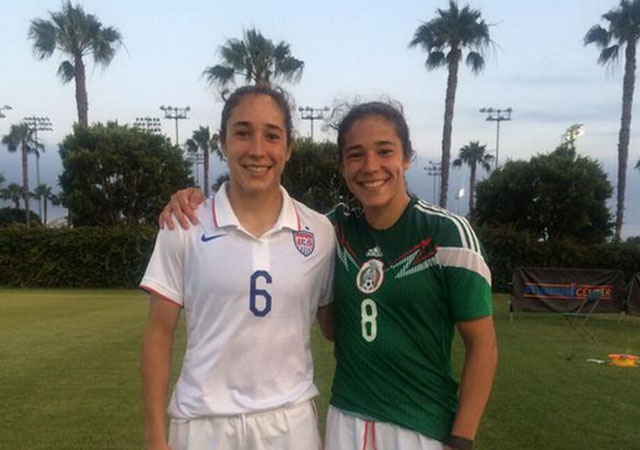 Monica and Sabrina Flores both play for the University of Notre Dame, but they recently lined up for Mexico and the U.S. U-20s, respectively. (Photo: Dawn Siergiej/Notre Dame)

There’s just something compelling about siblings facing each other in sports. Whether it be on a track, court or field, it’s a narrative that’s too compelling to ignore. In the soccer world, there have been a handful of cases of brothers suiting up for different national teams. Perhaps most notably, Jerome and Kevin-Prince Boateng, who play for Germany and Ghana, respectively, garnered headlines when they played each other in the 2014 men’s World Cup finals.

In June of this year, twins Sabrina and Monica Flores, who both play for Notre Dame, became the latest pair of soccer siblings to face each other at the international level. The two played in the U-20 NTC Invitational as Sabrina suited up for the United States, while Monica donned the Mexican uniform.

The Flores twins, however, aren’t interested in the narrative. To them, playing against each other wasn’t a big deal. After all, they had done it before in practices and scrimmages. They were just taking advantage of the opportunities presented to them.

“I think like a lot of other people were like, ‘Oh yeah the Flores sisters are playing against each other. This is like a huge deal’.” Sabrina said. “But we tried to stay away from all of that and just use the opportunities that we had. It just so happened that we were playing each other in that tournament.”

And while other people were making a bigger deal out of them facing each other, the pair did admit it was a bit weird to walk out on the field and not be wearing the same uniform. It makes sense that it would feel a little strange, considering the two shared a lot of things growing up, from the same club to position — both grew up playing outside back and now the same college.

“It wasn’t really a question of whether we’d go to the same school,” Monica explained about their decision to go to Notre Dame. “We work well together we always push each other and I think we wanted that to continue through college and that was also a big part I guess of growing up… It never really crossed our minds to go to different schools because we both have generally the same interests in what we wanted for a school and we know that being together has always made each other better.”

It’s hard to say whether the Flores sisters will play against each other again on the international level. CONCACAF qualifying for the next U-20 World Cup isn’t until December and the World Cup itself takes place the following fall. That’s simply too far off for the sisters to give much thought.

Right now, they are focused on their sophomore season at Notre Dame, where they are looking to help get the Fighting Irish back to the national title game for the first time since winning it in 2010. Last season, the team made it to the third round of the NCAA tournament before falling to eventual College Cup participant Texas A&M.

“I definitely felt that we had all the pieces to go further in the tournament but being that that didn’t work out the way we wanted it to, it made us go back the whole team go back and look at what we needed to work on and really concentrate on those things for this year,” Monica said.

Chief among the items the Fighting Irish are looking to improve from last season is how they start games. The team wants to come out and control the tempo.

“We went into a lot of games last year and kind of let our opponents dictate what the tempo was going to be or let them have the first half or the first shot,” Monica said. “I think that kind of hurt us, especially when we were in the tournament because both cases we went down 0-1 and we had to come back a lot and it happened a lot last season where we didn’t set the tempo or the standard that we wanted to set.”

Aside from a 2-1 come-from-behind victory against Santa Clara, so far this season, Notre Dame seems to addressed the issue successfully. In the first game of the season, Notre Dame faced Valparaiso, who they played in the first round of the NCAA tournament last season. In last November’s meeting, Notre Dame struggled to break down the Crusaders’ compact defense and won the game 1-0. In this season’s opener, the Fighting Irish beat Valparaiso rather convincingly, scoring six goals on the night.

In addition to improving their attacking mentality, Monica also felt that the team is even more unified than it was last year.

“I think that last year I felt unbelievably thankful to be in such a welcoming and family-orientated team and I think I couldn’t even imagine how much it could grow from there,” she said. “But seeing it from this standpoint, I think we’ve grown in terms of that and grown as a unit together. We went on this like a retreat in preseason that really helped us bond together and learn each other’s weaknesses and really build our family.”

While questions of who they might lineup for in the future are undetermined, for right now the focus is on where they will line up — at least for Sabrina. It seems that the sisters won’t be patrolling opposite flanks for Notre Dame as they did as youth players. This season, Sabrina has moved to central midfield after spending last season at outside back and she’s enjoying the challenge.

“Coach felt that I could be kind of like a player to make a difference in the middle of the field so I tried it out,” Sabrina said. “I kind of really enjoy it because I love being on the ball a lot, like play-making, setting up players on the team to be successful, and having to go at it myself. It’s just really, really exciting position.”

After all, transitioning to different a position for your team is another opportunity to grow as a soccer player, as are national team opportunities. Why not embrace it all and see where it goes?

NWSL posts low TV ratings, attendance for semifinals
The Lowdown: How the NWSL finalists were built