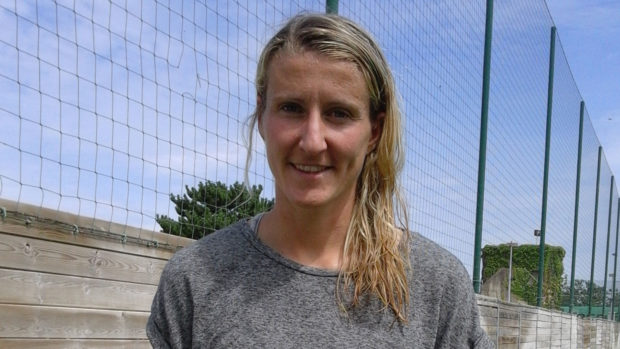 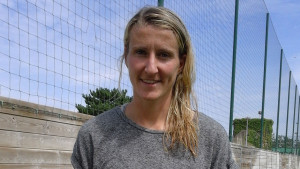 PARIS – She scores when she wants, and Anja Mittag has proven that she can find the back of the net with regularity at all levels for Germany, FC Rosengard, at the 2015 World Cup and now in France. The 30-year-old striker poses a rare type of creativity and flare that makes her a top striker and has helped her score 38 international goals.

Mittag was crucial in the early success of Germany at the 2015 World Cup. She scored a hat trick in Germany’s first match, a 10-0 victory over Côte d’Ivoire. While teammate Celia Sasic finished the tournament with six goals and the Golden Boot, Mittag was not far behind with five goals and the Bronze Boot to her name.

Germany was not able to find their game in an eventual 2-0 semifinals loss to the United States, who went on to win the title. Sasic’s missed penalty came back to haunt Germany. The 3rd-place match also proved to be difficult for the previously No. 1-ranked Germans as a surprising England side pulled off the upset. Mittag & Co. still wonder what could have been.

“Ending a World Cup in 4th place, it’s not like we could have done it better,” she said. “If you are so close to reaching the finals, then of course we were disappointed, especially how it ends with 4th place. To beat Sweden and France, and being close to beating USA, I think we still can’t be satisfied. I think we had the hardest road to go to the final or to the last four than maybe on the other side.”

On July 16, Sasic announced her retirement from football as she looks towards new challenges in life. Mittag has known the 27 year-old Sasic since their early teenage years. Sasic was honored with the 2014-2015 UEFA Best Player Award last month. Germany will have to look for other players to step up and fill the void left by Sasic. Mittag will miss the spirit and characteristics of Sasic on and off the pitch.

“Yeah it’s big of course,” Mittag said. “It’s not like a random player, she scored that many goals and she was important for us. Especially her personality — she was a leader. Yeah, we have to accept it. I think we still have good players and someone else can take her role.”

Internationally, Mittag would like to continue to represent Germany. Coach Silvia Neid will depart after the Rio 2016 Olympics and Steffi Jones will step in as coach and prepare for Euro 2017 in the Netherlands. Germany did not participate at the London 2012 Olympics and Mittag has her eyes set on Rio 2016.

“It depends if Steffi Jones wants to have me as a forward or not,” Mittag said. “Maybe she doesn’t see myself as a player on her team. I don’t know yet, but of course the Olympics I want to.”

As for the 2019 World Cup in France. Mittag will be 34 years old and says that she isn’t yet thinking about that.

The transition between coaches is a huge factor at play. Jones could come in and completely add a different philosophy, tactical strategy, formation, and training style. In Neid, players have come to know what to expect day in and day out for the past decade. It can take time for players to adjust to change. Mittag has learned a lot under the guidance of Neid and the coach will be missed after Rio 2016.

“She really knows a lot about soccer and she teaches a lot,” Mittag said. “You really develop as a player in your way of tactical stuff and the way of thinking. She’s really good and this is a part we’re going to miss because she has a lot of experience.”

Paris Saint-Germain signed Mittag to a two year-contract in May and it hasn’t taken long for her to find the score-sheet. Mittag scored in her first two matches of the Feminine Division 1 for PSG, a 5-0 win over Rodez on August 30 and a 2-0 victory away to Soyaux on Sept. 6.

In her three full seasons with Damallsvenskan club, FC Rosengard (formerly Malmö). Mittag tallied 56 combined goals and led the league in goals during the 2014 (22) and 2012 (21) campaigns. With all the success and talent around her in Sweden, some may have questioned why Mittag would move to the French capital. But with Mittag’s age now abover her jersey number with her new team (She previously wore No. 31, but the league doesn’t allow numbers above 29), the German said it was time for a change.

“I’m 30 now, so I want to do something new,” Mittag said of her choice. “I think this was a good opportunity to experience and do something different and come to another country. Learn a new language and meet some other players.”

Caroline Seger is excited to have a top striker playing for Paris Saint-Germain this season. A player who only needs one chance to score and change the complexion of a match is something all teams look for.

“She’s the type of player we missed out on a little bit,” said Seger, a Swedish international. “She’s a fantastic soccer player and a great character for this team. She’s a goal scoring machine, I would say.”

The key threat for PSG in the Feminine Division 1 title race will reigning champions, Olympique Lyonnais. Both teams battled it out last season and finished with PSG just behind Lyon. Mittag sees the battle continuing between both teams this season. The first fixture between these clubs will be on Sunday, Sept. 27, when Lyon will host PSG.

“Of course we also want to be a threat for them and maybe be able to beat them,” Mittag said. “Also, we want to win the championship one time. It would be huge for us, but of course Lyon is not just like a random team. They’re like the best team in Europe.”

While PSG and Lyon battle for top spot, fellow Feminine Division 1 sides will hope that either team slips up. The balance in the league from top to bottom is not there just yet, but the competition will be something to watch for from PSG and Anja Mittag.

“You have to find a good rhythm, but it’s good to have at least have some really, really good teams at the top because it makes it tough. As a player you love to meet the best teams. It’s a good competition for us as well.”

Mittag and PSG hope this will be their year to beat Lyon.