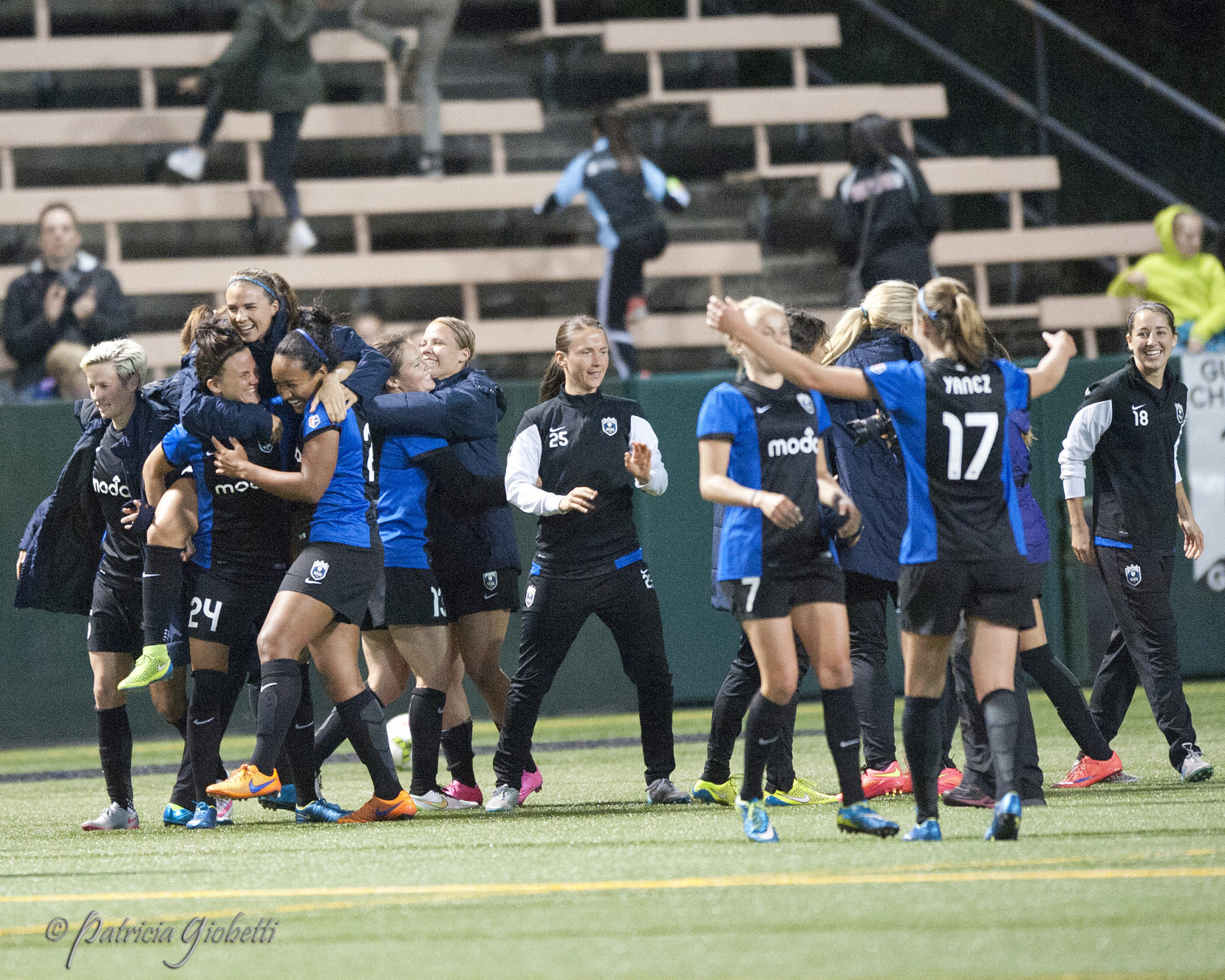 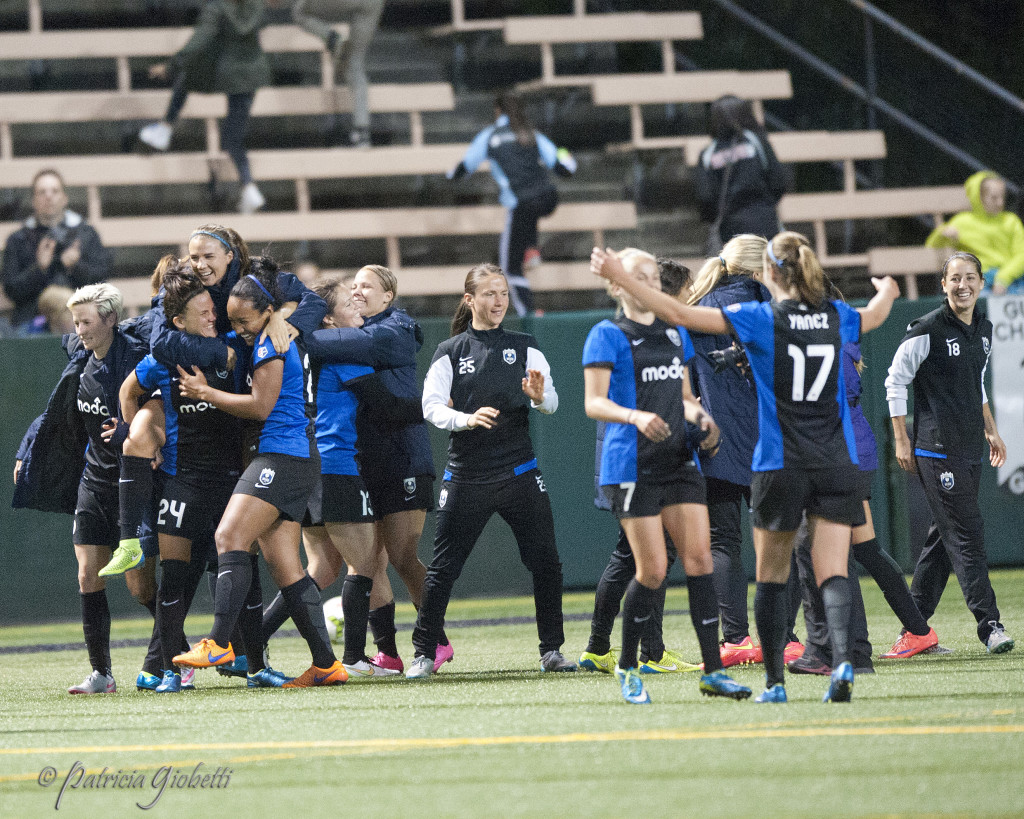 The joy was palpable among Seattle Reign players as they surged past the Washington Spirit late to advance to a second straight NWSL Championship. (Photo Copyright Patricia Giobetti for The Equalizer)

Seattle Reign FC is headed to the NWSL Championship for the second straight year, once again against FC Kansas City. Last year, the Reign lost at home (although notably not at their regular home, where they have never lost in 24 matches) after winning the Shield.

The Reign again won the Shield this season and again beat the Washington Spirit at home — 3-0 on Sunday night — to advance to the final. These are the biggest talking points from the Reign’s victory:

One constant throughout the match — and a trademark of the Reign’s throughout the season — was Seattle’s high pressure which frustrated the Spirit. The Reign’s line of confrontation was all the way up at the Spirit back four, which made for more hurried decisions by the Spirit. Most importantly, it meant that 2015 NWSL Golden Boot winner Crystal Dunn, who scored 15 goals this season, didn’t see much of the ball in a withdrawn striker role.

“No individual can stop her. They did it very well as a team. Their lines and distances were right,” Spirit coach Mark Parsons told The Equalizer.

Parsons said he thought his team could have done a better job of playing balls in behind Seattle’s back four for Dunn to run on to. The Reign were playing touch-tight to Dunn, preventing her from getting the ball at her feet. That called for more balls behind Seattle’s backs to keep them honest, but the Spirit didn’t play any.

Dunn shifted to a wide role and Diana Matheson tucked into the withdrawn role in the second half as Parsons looked for answers, but they didn’t come. Parsons said that he feels better about this year’s semifinal loss to Seattle than last year’s, noting that the better team on the day won in what he calls the most competitive league in the world.

“Getting caught playing a team that is obviously the best in the league and being up against it was always going to be tough,” Parsons said. “You just hope that when you get your momentum you are going to get one and obviously we didn’t.”

An alternative sub-headline might be that the Reign are just phenomenal. Seattle is the best team in the league and has been for the past two seasons. But last year, they slipped in the final, suffering bitter defeat which coach Laura Harvey still struggles to talk about. The pain of last year’s loss is still palpable, but so too is the drive from the Reign to not have a repeat mistake in 2015. Part relief and part elation, the Reign celebrated Sunday’s semifinal victory like it was a championship. They know that just the Shield isn’t good enough.

“There’s a different mindset in the girls this week than there was a year ago,” Harvey said, via Matt Pentz of the Seattle Times. “We were a little bit happy. We’d already done it last year. It wasn’t like that this week.”

And don’t overlook just how important Beverly Yanez is to the Reign. She is the team’s MVP this season, even if she isn’t necessarily its best player. Ninety seconds after entering the scoreless match, she gave Seattle the lead for her 10th goal of the year, tying her with last year’s league MVP Kim Little. Yanez has stepped into a larger role this season with the departure of Sydney Leroux and Nahomi Kawasumi, and Yanez as thrived as Seattle’s primary striker. The beauty of the Reign’s front six is that they are all interchangeable and versatile, too.

Spirit have foundation for future 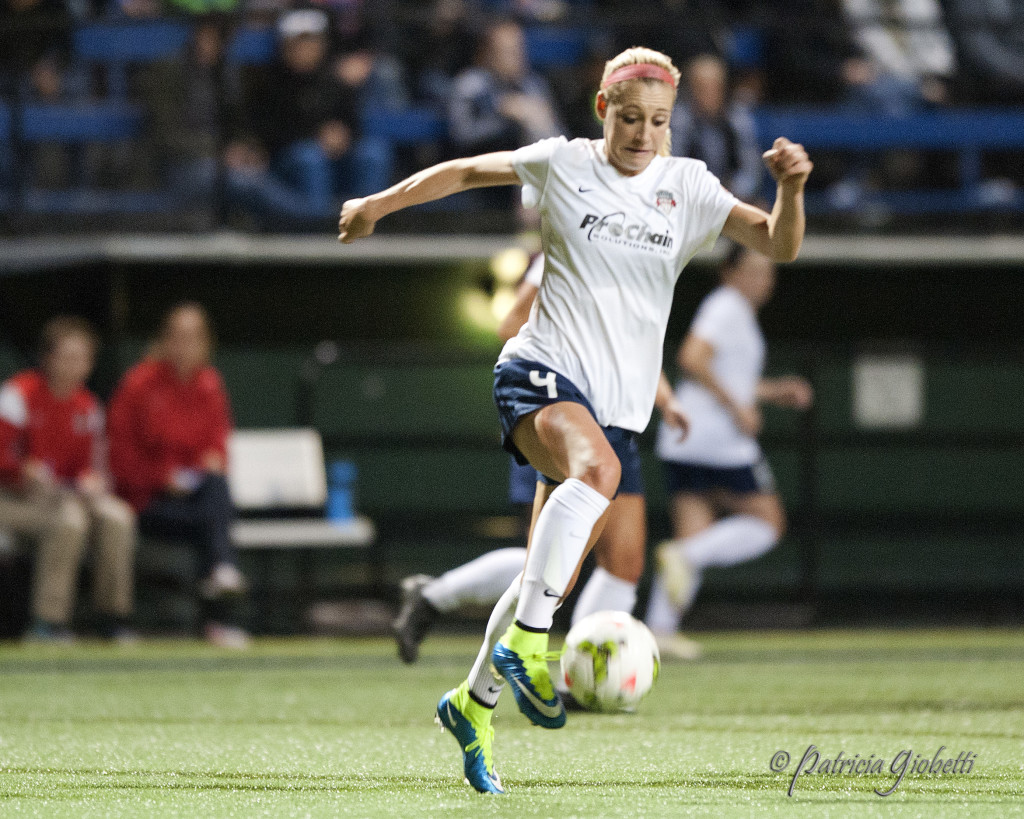 In Megan Oyster, the Spirit have a foundation for the future in defense. (Photo Copyright Patricia Giobetti for The Equalizer)

Two years ago, the Washington Spirit were wrapping up a miserable opening campaign that saw them finish last (right behind Seattle, remember). Parsons took the helm mid-season in 2013 to being the rebuild, which included making Dunn the No. 1 draft pick.

Fast-forward to September 2015 and the Spirit have twice made the playoffs and there is finally belief that they can be a perennial contender. Parsons didn’t have that belief last season.

“With this result, my head is already going. We’ve got to keep as many [players] as we can,” he said.

Dunn is obviously a franchise player and should be on the plane to Rio next year, but defenders Megan Oyster and Whitney Church also exceeded expectations, establishing themselves as starters in their rookie season. Add in Diana Matheson play-making, Christine Nairn as one of the most improved players in the league since 2o13 and U.S. internationals Ali Krieger and Ashlyn Harris and the foundation is there.  Now the target is the No. 2 seed in 2016 to obtain a home playoff match, Parsons said.