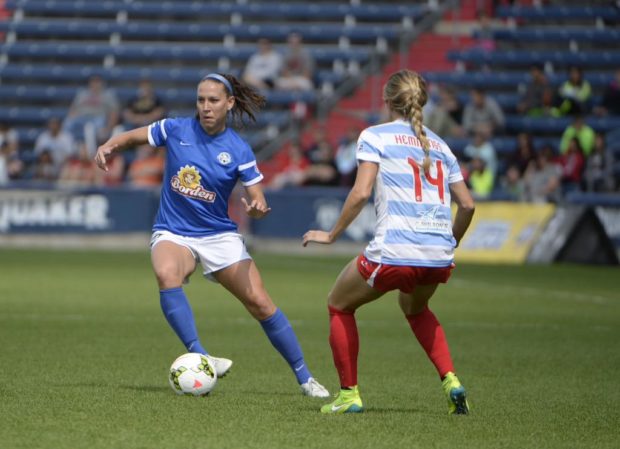 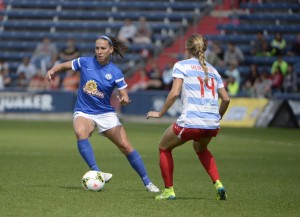 Becky Sauerbrunn is great, but everyone on FC Kansas City defends

Sauerbrunn made a sensational defensive play to help create the second goal, but the true beauty of FC Kansas City is how their attacking players defend. Case in point was the initial goal they scored when Lauren Holiday continued to press the Red Stars’ back line, eventually forcing Abby Erceg into a back pass to keeper Michele Dalton that she otherwise would have never had to make. But Holiday did not stop there. She followed the play and was in Dalton’s gril,l where she was able to block the clearing attempt. But that was not the end of the story. Amy Rodriguez was following the play from the other side and slipped into space where she was able to pounce on the deflected ball and score. There were numerous other examples throughout the match of Holiday and Rodriguez defending on all parts of the pitch. And the sequence that led to the first goal is proof that you don’t have to high pressure to pressure effectively.

“I feel like we have players that can change the game on a dime,” FC Kansas City coach Vlatko Andonovski said afterwards. “Players like A-Rod and Cheney (Holiday), they don’t need too many opportunities to put the game away.”

FC Kansas City won the battle on their right flank

The combination of Leigh Ann Robinson and especially Heather O’Reilly proved too much for Arin Gilliland to handle and the Red Stars’ aggressive left back was back on her heels much more often than normal. That matchup led to two of the three Kansas City goals. O’Reilly assisted on the second goal when she was played into space on the right side, and although Gilliland properly steered her from cutting to the goal line, O’Reilly was still able to make the decisive pass to Erika Tymrak. The third goal came after O’Reilly won a 50/50 header from Gilliland in midfield off a Nicole Barnhart free kick.

“We talked about the aggressiveness that Gilliland has going forward and her ability to beat players on the run,” Andonovski said. “The other player we talked about was Christen Press. Every time they got the ball we managed to throw numbers around them so we could discourage them from even looking to go forward.”

The final score was a bit harsh to the Red Stars, who never quit

The lopsided loss was a cruel ending to a very good season for the Red Stars. They incorporated several rookies, adopted a more attractive style of play, and paced the lead through the midway point in the season before slowing down and eventually dropping their first ever playoff game. But as coach Rory Dames said after the match, “One game does not change seven months.”

A couple of poorly timed mistakes doomed the Red Stars on Sunday. Erceg probably should have gone forward with the ball instead of playing it back to Dalton, who could have done a better job protecting it leading to the first goal. The third goal came off a goal kick. “We needed to shape ourselves correctly,” Dames said. “We got caught flat and they got behind us. The first and third goals we might as well have just kicked it in our own goal at that point.

“I thought the team played really well. I felt we got into dangerous spots. The big difference in the game was their players in those spots just had more quality than our players did.”

So the season is over, but there is much to look forward to. For the third year running the club successfully incorporated multiple rookies into the regular rotation. And the Red Stars more or less uncovered Dalton, who despite a tough playoff game led the league in goals against average and was vital to the club’s success during the World Cup break.

“I thought the players were great this year,” Dames said. “I thought the team was great. Huge step for the organization and the Red Stars brand. It doesn’t change the fact that what went on today in that 20-minute segment was very disappointing and very uncharacteristic of us. Going forward we’ll learn from that.”