Spirit hungry to flip result on Reign in NWSL semifinal 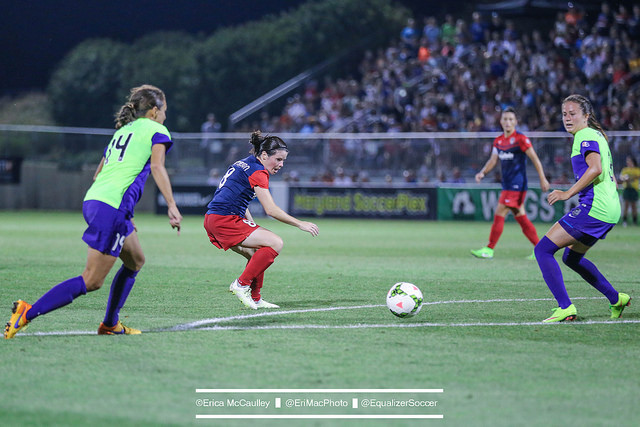 Diana Matheson will be an X-factor for the Spirit against the Reign on Sunday in the NWSL semifinal. (Photo Copyright Erica McCaulley for The Equalizer)

The Seattle Reign and the Washington Spirit will face off Sunday at Memorial Stadium (9:30 p.m. ET, FS1) in second of the NWSL semifinals matches. Sounds familiar, right? With the blatantly obvious laundry list of similarities between this Sunday’s semifinal and the 2014 semifinal between these two teams, it’d be easy to confuse the match-up with a soccer rendition of Groundhog Day.

In addition to being a rematch of last year’s semifinal with each of the teams occupying the same spot in the standings as last season, the Spirit face Seattle for the second week in a row. Seattle bested Washington, 2-1 in the regular-season finale.

The deja vu feeling to Sunday’s rematch doesn’t end there, though. In Thursday’s press conference previewing the match, Spirit head coach Mark Parsons revealed once again that a healthy player wouldn’t be traveling with the team. Last year, it was striker Lisa De Vanna who didn’t travel after some acrimonious relations with the team. Thursday, Parsons revealed that captain Ali Krieger wouldn’t travel due to her father’s wedding.

With striking similarities between this year’s semifinal and the 2014 edition, the question becomes: Are the Spirit destined to suffer the same fate? In 2014, the Spirit struck first, but conceded a penalty, missed a penalty of their own and lost the momentum. Then, a defensive lapse by the Spirit allowed the Reign to close the door late.

How often has Parsons thought about the heartbreaking loss? Not very often at all, apparently, although he admitted he watched the game a month ago.

“I watched it back because I was intrigued one night,” Parsons said. “I was excited when I looked back. We had some really talented players last year and seeing how we had grown more as a team this year and how I think we are more tactically intelligent and we’re also more dangerous as individuals…this year, it’s a new game, new team, new players.”

Parsons does have a point. The team’s current roster has only seven players from last year’s team. This isn’t last season’s plucky underdogs who overachieved and nabbed the last playoff spot. This year’s team is downright baffling.

When the team is firing on all cylinders, its one of the most dangerous in the league. In fact, the Spirit handed the Reign, the Shield winners, their most sound defeat of the season, a 3-0 result back in July. 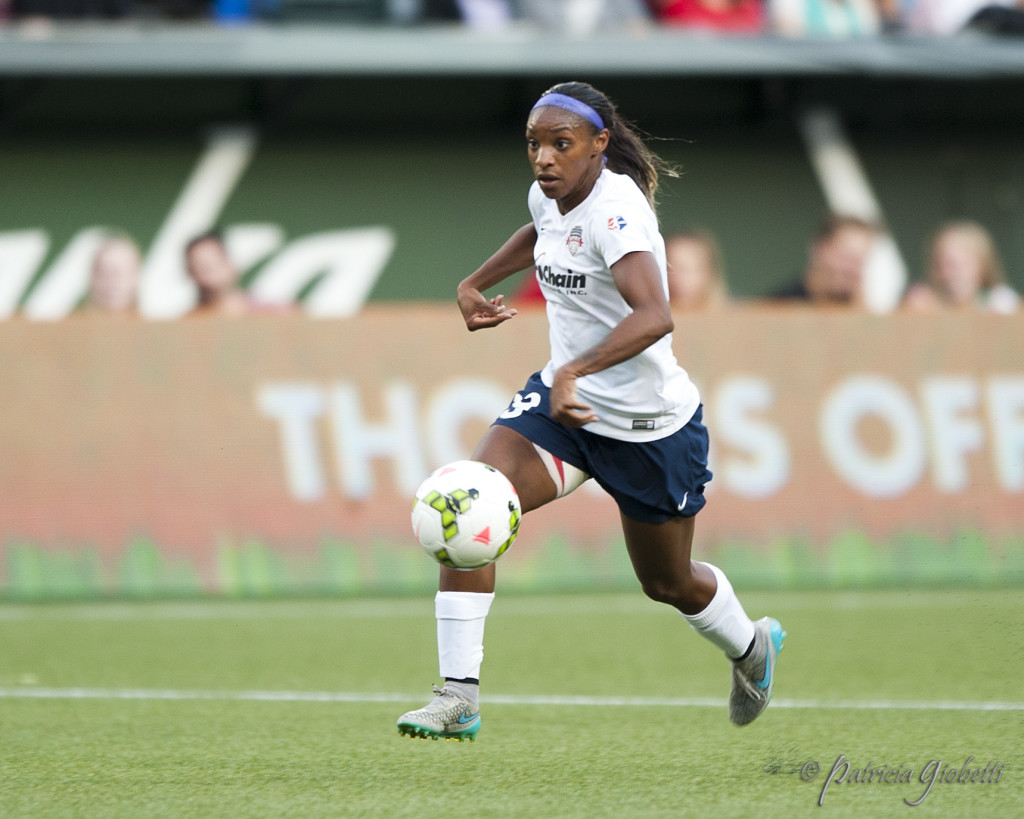 Crystal Dunn promises to be a factor in the Spirit’s semifinal vs. the Reign. (Photo Copyright Patricia Giobetti for The Equalizer)

When the Spirit are not firing on all cylinders, however, the team relies almost entirely on moments of sheer brilliance from Crystal Dunn to eek out points. (Ok, the team also does this when playing well too.) To be fair, Dunn delivers these moments rather frequently — winning the NWSL Golden Boot with 15 goals — but the Dr. Jekyll and Mr. Hyde personality of the Spirit is too pervasive to ignore.

Washington is the only one of the playoff teams to have won a game against all three other three playoff teams. On the other side of the coin, however, the Spirit managed just one point against the Boston Breakers, the team which easily finished last in the standings.

While last year’s semifinal loss won’t seem to factor much into Sunday’s match, Diana Matheson did admit it would serve as motivation for the holdovers from the 2014 roster. Last week’s loss to the Reign is a different story.

“You naturally have this extra bit of hunger when you’re coming off a defeat, no matter who you’re playing,” Parsons said during the press conference. “You hope there’s not, but there’s always when you lose the training is a bit spicier and a bit more competitive and it has been this week. Then you get the opportunity to play the same team again. I think that’s going work in our favor emotionally.”

An emotional boost may be what the Spirit need to bring out the team that spent much of the first half of the season second in the standings.

If the Spirit knock off the title favorites, look for one of two players to provide the spark offensively. The first one is so obvious that it doesn’t really even need to be discussed. Dunn’s 15 goals this season account for just shy of half the Spirit’s offense.

Perhaps Houston Dash head coach Randy Waldrum summed Dunn up best earlier this season after a lost 1-0 to Washington when he said, “She’s a handful and I think she’s one that you can keep under wraps for 89 minutes and all she needs is that one chance.”

The other player? Matheson. If the Reign go into Sunday’s game with any bit of negative deja vu, it would almost certainly be about the Canadian international. In nine career games against Seattle, Matheson has only failed to record a goal or assist on one occasion. She has six goals and two assists in those games.

[MORE: Chicago led by trio of rookies  |  Will face experienced Kansas City side]

Following two major injuries, Matheson made her return to the pitch with the Spirit against Seattle back on July 18th, recording an assist. Her remarkable return to the field didn’t garner much attention as all eyes were on Dunn, but Matheson’s insertion into the lineup undoubtedly added another element to the Spirit attack even when she doesn’t end up on the scoresheet.

Now after nearly two months back, Matheson says her return feels like “old news” and that she feels like she’s “just a soccer player now” after building her match fitness up for the first month or so of her return. That’s certainly good news for a Spirit team looking to be the first to knock Seattle off at Memorial Stadium.

And how does Seattle plan on stopping the diminutive midfielder? The short answer is the same way you stop Dunn.

“We know she’s going to get into the game, but we want to try to restrict the opportunities she has in dangerous areas of the field,” Seattle Reign head coach Laura Harvey said. “If we feel we can do that, then we have a chance to contain her. I think we’ve done a pretty good job of that over recent times, but she’s always a threat. She’s a fantastic player and when given time and space to get in the game then, she’ll without doubt will be a threat for sure.”

It’s hard to say whether NWSL fans will end up feeling deja vu Sunday in some way or another. But if they are, it should mean it’s another great match between the Spirit and Reign.