Haiti replaces Australia as US opponent for Sept. 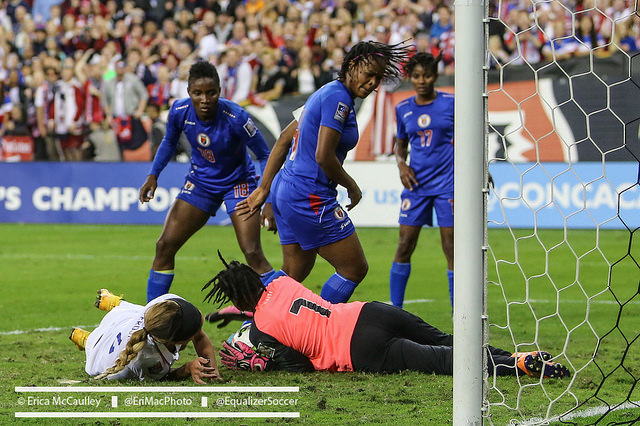 Haiti, seen here in action against the United States last October, will serve as the United States’ opponent for two September matches after Australia pulled out of the games due to a player strike. (Photo Copyright Erica McCaulley for The Equalizer)

Australia is out and Haiti is in as the United States women’s national team’s opponent in two matches on their World Cup victory tour later this month. The games will be played in Detroit on Sept. 17 and in Birmingham, Ala., on Sept. 20, as originally scheduled.

Football Federation Australia announced earlier Thursday that the Matildas would not travel to the United States as originally scheduled due to a work stoppage. The FFA’s collective bargaining agreement with its men’s and women’s teams expired, and the two parties have failed to make progress in their discussions to come to terms on a new deal.

[MORE: Details on Haiti’s struggles to field and support a team]

On Wednesday, the Matildas made formal their boycott by refusing to show up for practice. It has been two months since the Matildas have been paid — the length of time since the previous CBA expired.

Australian players rejected a short-term solution to the negotiations, which included back-payments. Many perceive the two matches against the World Cup champions as the Matildas’ greatest leverage in negotiations. Australia made it to the quarterfinals of the 2015 Women’s World Cup, becoming the first men’s or women’s team to win a knockout-stage match at a World Cup by beating Brazil in the round of 16.

“From the Matildas’ perspective, the letter of agreement doesn’t give them what they want. They want a contract, they want job security, things of that nature,” PFA (union) chief executive Adam Vivian said.

“The letter of agreement is a short-term solution, a band-aid solution, and certainly not what the players were seeking.”

For the U.S., the match against Haiti represents a significant drop in the level of competition. Haiti is ranked 63rd in the FIFA world rankings, compared with an Aussie team ranked No. 9 in the world after a strong World Cup and a valiant showing in a tournament-opening loss to the United States.

The U.S. has won all four meetings against Haiti by a combined 29-0. The two teams most recently met in World Cup qualifying last October, when the U.S. won, 5-0. Haiti — whose players are largely based in Indiana with coach Shek Borkowski — was originally scheduled to scrimmage Australia as part of the Matildas’ U.S. tour.

U.S. Soccer says over 31,000 tickets have been sold for each of the two matches.

The Americans opened the victory tour with a pair of wins over Costa Rica, 8-0 and 7-2. The tour continues on Oct. 21 in Seattle and on Oct. 25 in Orlando, Fla. Four more matches are slated for December against opponents to be announced and in cities to be announced.