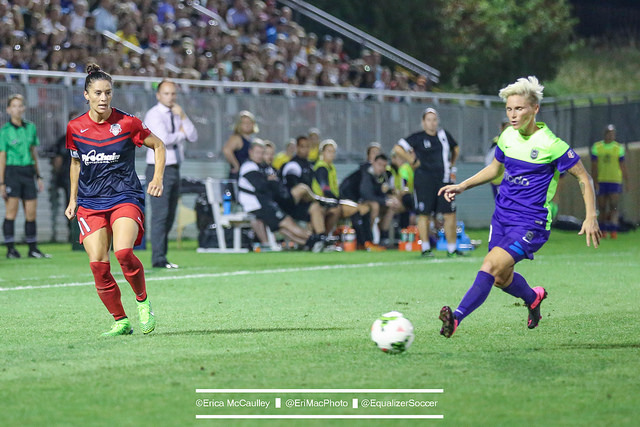 Ali Krieger (left) won’t play for the Spirit in Sunday’s semifinal against Seattle Reifn FC because she will be at her father’s wedding. (Photo Copyright Erica McCaulley for The Equalizer)

Washington Spirit fans have learned the hard way by now: Expect some bad news when the team has a conference call previewing the playoffs.

For the second straight year, Spirit coach Mark Parsons announced on the typically mundane media conference call to preview the NWSL semifinals that he will be without one of his best players for the road match against Seattle Reign FC.

Ali Krieger will not be available for the match; she will be at her father’s wedding, which takes place on the same day. The No. 4 seed Spirit play in Seattle in Sunday’s second semifinal (9:30 p.m. ET, FS1).

News of Krieger’s absence comes much like last year’s news — delivered via the same medium — that then Spirit striker Lisa De Vanna would not travel with the team to Seattle for the semifinal, which the Spirit lost, 2-1. De Vanna was left behind as a coach’s decision after disagreements behind the scenes. Parsons casually mentioned on the media call last year that De Vanna would not be available.

That prompted reporter Beau Dure to ask the Spirit coach if he had any similar announcements, and Parsons shockingly — and begrudgingly — admitted he did.

“I was hoping someone wouldn’t ask me so Seattle wouldn’t find out at this point in the week, but I’m not going to lie, so thank you for ruining my surprise,” Parsons said, half serious but certainly partly serious. “We will be missing one player. Ali Krieger will not be traveling for the trip. The unfortunate timing of two amazing events – Ali’s daddy is getting married on Sunday and she will be there for the wedding and will not be in Seattle for the semifinal. Otherwise, everyone else is healthy and everyone else will be in Seattle.”

The deja vu seemed so ludicrous that Dure asked Parsons if he was joking.

“I wish I was, and I wish you didn’t ask me that question, but unfortunately, yes, those things are true,” Parsons said.

Krieger’s time with the Spirit this season has been limited to eight games due to the World Cup and a concussion sustained in the opening match in April. After returning from the World Cup, Krieger shifted from her usual right fullback position to defensive midfield for the Spirit. Her absence on Sunday against the best midfield in the NWSL could be a a game-changer.

Mid-season defensive changes pay off for Reign
Haiti replaces Australia as US opponent for Sept.