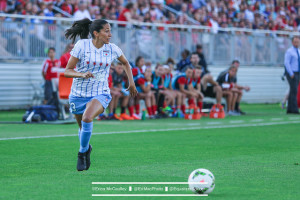 Christen Press scored in the 90th minute to ensure the Chicago Red Stars earned a point in a 1-1 draw with the Houston Dash on Sunday at Toyota Park. Chicago ends the season with sole possession of second place, while the Dash finish fifth, one spot outside the playoffs but four spots better than last place in their inaugural season.

Ella Masar scored her second goal in as many games to put the Dash ahead in the 62nd minute. Masar made a diagonal run across Chicago’s back line and collected a pass from Morgan Brian. From about 20 yards out, Masar sent a left-footed shot over the head of a diving Karina LeBlanc and into the top corner of the net. The goal was Masar’s second of the season.

Chicago would not be denied, however. Rookie fullback Arin Gilliland dribbled up the field and the ball popped into the air and into the path of Julie Johnston, who headed it on into the path of Press. The U.S. striker struck the ball on a one-time volley for her 10th goal in 11 NWSL matches this season.