Spirit fall to Reign, set up rematch in semifinals 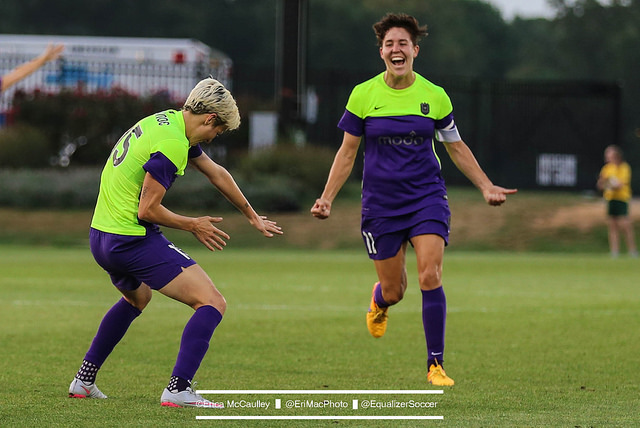 Megan Rapinoe celebrates her game-winning goal against the Spirit. (Photo Copyright Erica McCaulley for The Equalizer)

BOYDS, Md. — First-half strikes by Jess Fishlock and Megan Rapinoe lifted the visiting Seattle Reign over the Washington Spirit on Saturday night in front of a record crowd of 5,708 at the Maryland SoccerPlex. The Reign midfielders’ tallies ensured that the two teams will face off again next week in the NWSL semifinals.

Seattle put the Spirit under pressure early in the game. In the 8th minute, the Reign had three shots in quick succession as the Spirit struggled to clear the ball while the Reign threatened in the final third. The first two Seattle shots were blocked by Spirit defenders Estelle Johnson and Megan Oyster, respectively. The final shot in this sequence, taken by Fishlock, went wide of the target.

Seven minutes later, Fishlock put the Reign on the board after an attempted clearance by Katherine Reynolds fell to the feet of the Welsh international. Fishlock, who was given ample time and space to operate, fired a shot which was deflected off a Spirit defender and into the goal.

Rapinoe doubled the Reign’s lead 10 minutes later with a world class strike from about 30 yards out. Rapinoe’s well-placed shot hit the post and then bounced in for the score.

Goal number EIGHT of the season for @jessfishlock and it is a beauty. ? pic.twitter.com/aj97v3uIcv

The Spirit managed to climb within in one before the break as Lauren Barnes fouled Diana Matheson in the box to set up a penalty kick opportunity. In a scene that drew flashbacks to last year’s semifinal in Seattle, Matheson stepped up to the spot against Hope Solo. Unlike that game, Matheson easily converted as Solo guessed the wrong way.

While the second was full of action, the halftime scoreline would stand. One of the best chances of the half for either side came in the 56th minute, when Katrine Veje fired a shot that required a full extension save by Ashlyn Harris.

For the Spirit, Francisca Ordega nearly knotted the game up in the 64th minute. Crystal Dunn sent a cross into the box for the Nigerian international, but Ordega’s ensuing shot went just inches wide of the far post.

Reign goalkeeper Hope Solo give a ‘thumbs down’ after being announced as No. 2. Reign midfielder Jess Fishlock said the incident was disrespectful to Solo. (Photo Copyright Erica McCaulley for The Equalizer)

As the game progressed the intensity increased as well, resulting in increasingly physical play. Postgame, Fishlock said that the Spirit public address announcer announcing Solo as No. 2 — instead her actual jersey, No. 1 — during lineups was the culprit for the chippy play.

“I have so much respect for Washington Spirit as an organization and I have so much respect for Ashlyn (Harris) but what they did at the beginning of the game to disrespect Hope Solo and us as an organization and disrespected a goalkeeper that’s won Golden Glove in the World Cup,” Fishlock said. “It’s actually, like, a bit disgusting. I think that’s why we had a little bit of a chip on our shoulder because we’re a team. We protect our teammates and it’s just unnecessary to do that to such a, one, high-profile international player, and two, to a team that’s just done history in this league.”

Washington’s Christine Nairn was fouled hard in the midfield in the second half and appeared to favor her shoulder from the rest of the match. Later on in the match, Hayley Raso and Solo collided hard on a challenge in front of goal in the late stages of the match. Raso was awarded a yellow for the incident.

The Reign did an excellent job of keeping league-leading scorer Dunn at bay, which is something that’s proved no easy task this season. Dunn dropped farther and farther back in an effort to receive the ball. That in turn left more Reign players between her and the goal.

“Crystal Dunn has been fantastic this year. She is without doubt the MVP,” Seattle head coach Laura Harvey admitted postgame. “I don’t even think it’s contest. Kim (Little)’s run her close I think but she’s done so well in this period all through the league but I’m a true believer in that if you don’t let her get the ball then she doesn’t do as much.”

Harvey’s counterpart, Mark Parsons, was surprisingly pleased with his team’s performance despite the scoreline. Parsons noted for the first time in four games his side actually “played football” and had possession.

Parsons tinkered with his midfield for this game, moving Nairn into the playmaking No. 10 role and inserting Angela Salem into the starting lineup. He credited Salem with the team’s increased possession in the game.

“She has been excellent tonight,” Parsons remarked, “She made us a possession team tonight with how great she was on the ball. I think a performance for her like that puts her in the lineup for next week and that’s all she can do. She had a job to do and she’s done it.”

Harris made clear that her team has work to do before the semifinal rematch stating that possession in and of itself isn’t enough to win.

“I think we kept the ball well but at the end of the day we’ve got to test goalkeepers, we gotta shoot because we’re not going to score if we just possess. So I think there has to be a better combination of really going at players and attacking and shooting because tonight I don’t think we tested Hope (Solo) enough and I think that’s probably been the problem the last few weeks.”

Harris also said her team has to be better defensively and not leave spaces and gaps for Seattle to exploit. Expect that task to be harder next week as Harvey is “really confident” that Seattle forward Beverly Yanez will available for the game. Yanez hasn’t played since injuring her hip in the first half of an August 21 victory over Houston.

If Saturday’s match-up is any indication, next week’s semifinal between Washington and Seattle should be entertaining. Next Sunday’s match will kick off from Memorial Stadium in Seattle at 9:30 p.m. ET on Fox Sports 1.