The Lowdown: What we know, what we don’t know 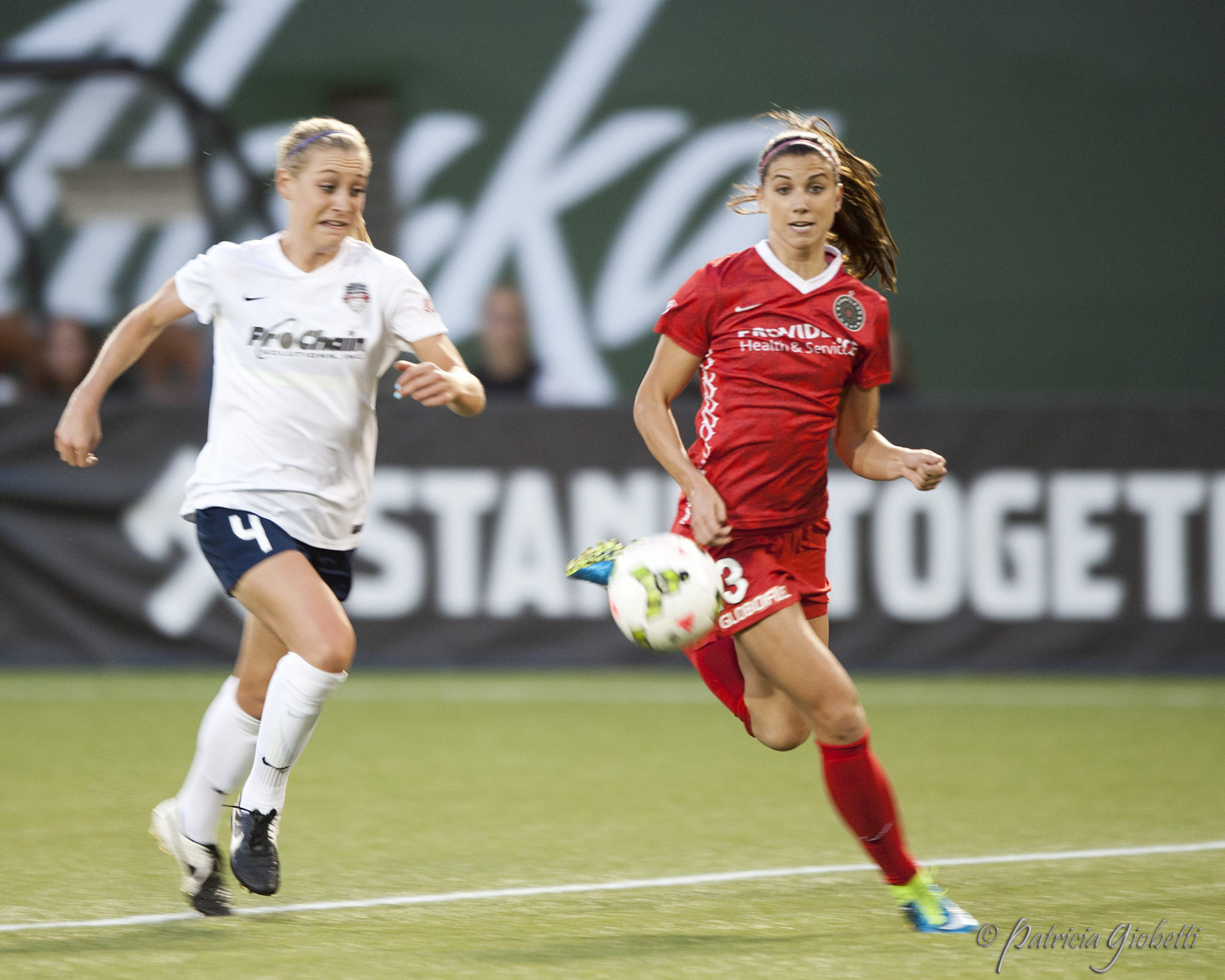 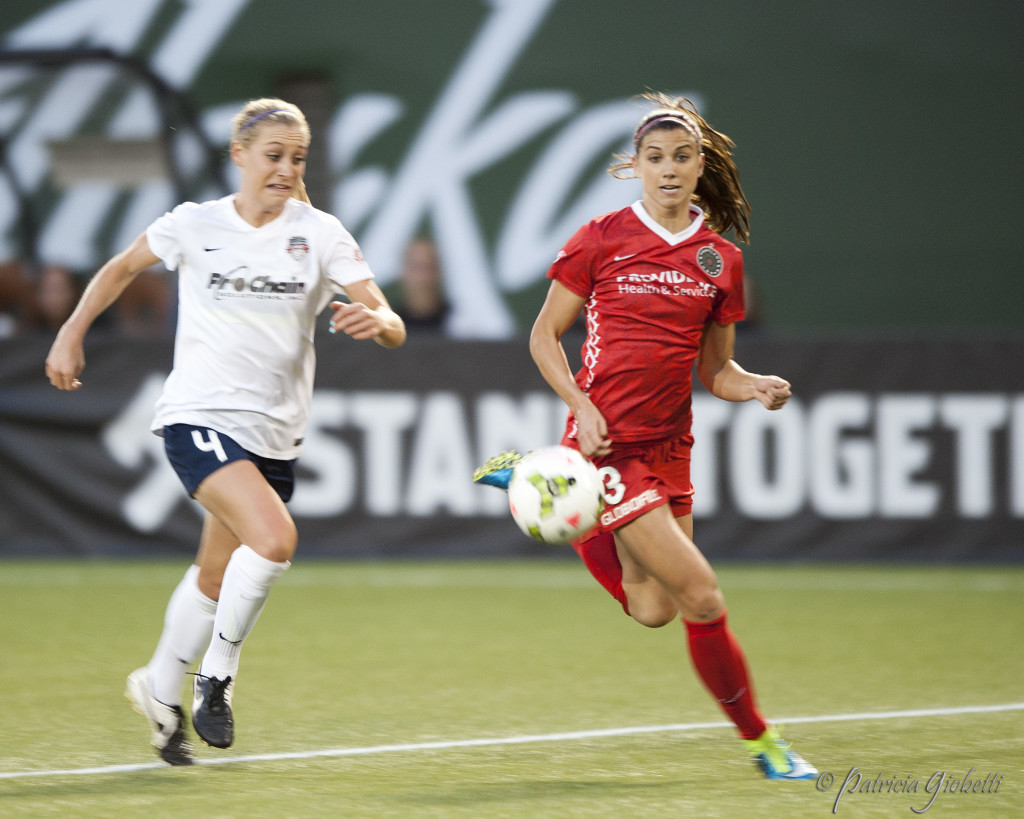 The Spirit are in the NWSL playoffs, but will they host a semifinal? And the Thorns are eliminated after showing flashes of their good and bad sides. (Photo Copyright Patricia Giobetti for The Equalizer)

As the calendar flips to September and takes NWSL play with it for the first time,  there is still much to be worked out regarding this year’s playoffs.  The four combatants are known but the order remains up in the air.  We know the Reign will finish first and host a semifinal and that FC Kansas City will be on the road for their semifinal.  The Breakers have also been assured of finishing bottom of the table and are unofficially on the clock for the 2016 draft.  With a week to go here’s what we know, and what we don’t know.

What a week for the Reign.  Wednesday night they dominated the Breakers to take down their second straight NWSL Shield.  That makes them the first team in any of the three women’s pro leagues to ever win anything twice in the same league.  Saturday they trailed Sky Blue for more than 80 minutes before Jessica Fishlock equalized in the 90th minute to save the team’s unbeaten record at Memorial Stadium.  Now attention will turn to Beverly Yanez, who is said to be making good progress from her injury.  Last year Elli Reed, then a regular starter, carried an injury into the final.  This year, Yanez is the player to watch.

The Red Stars enjoyed a good weekend.  First they beat the Flash to win for the first time in August.  Then they regained control of second place and the right to host a semifinal when the Spirit drew the Thorns.  So it comes down to the final weekend and the knowledge that if they beat the Dash on Sunday at Toyota Park it will mean the club’s first NWSL playoff match will be at home.  And they could have it wrapped up before kickoff.  If the Spirit do not beat the Reign the night before that will be enough for the Red Stars to finish second.  A Spirit win will force the Red Stars to win their match.  If they don’t it will mean a third place finish and a trip to Washington.  The Red Stars cannot finish fourth and will not see the Reign in the semifinals.

The scoreless draw on Thursday in Kansas City put the Spirit into the playoffs for the second year in a row.  Sunday’s 3-3 draw in Portland—against a Thorns club that got eliminated with Thursday’s result—ceded control of second place to the Red Stars.  The Spirit now much beat the Reign on Saturday night at home and then hope the Red Stars lose or draw against the Dash a day later.  On the flip side if they lose and FC Kansas City win or draw; or if the Spirit draw and FCKC win, they will finish fourth and head to Seattle for the semis.  Of the three sides battling for position, the Spirit are the only team whose fate lies in other hands regardless of their result.

After a topsy-turvy season, FC Kansas City got it together at the right time.  They have posted four straight clean sheets and are safely back in the playoffs as the only team to qualify all three seasons.  They cannot host a semifinal as they have the last two years and will be in either Chicago or Seattle a week from Sunday.  If they lose to Sky Blue on Wednesday it will be Seattle.  If they draw then the Spirit must get a result on Saturday or FCKC will finish third and go to Chicago.  If they beat Sky Blue then the Spirit need to beat the Reign outright else the Blues will finish third and go to Chicago.  They cannot meet the Spirit in the semifinals.  A troubling sight is Becky Sauerbrunn’s name on the injury report.  The venerable defender is probable with a hamstring strain.  Also, Erika Tymrak will not play due to a sprained ankle.

The Dash have been vocal since being knocked out of the playoffs.  They want to finish fifth.  This season was a nice step forward for a side that propped up the table in its expansion season but still it seems as if they left enough points on the board to still be in the race.  Unfortunately Carli Lloyd finally stopped scoring every time she laced up her cleats, the back line remained unstable, and Brittany Bock no sooner made it back from ACL surgery than other injuries sabotaged yet another season for her.

In the end there were just too many moving parts, too many injuries, and not enough continuity for the Thorns to go on a sustained run of results.  Sunday night’s 3-3 draw to the Spirit showed how good, and how poor, the Thorns have been during the season.  The recovery plan may well include a new coach.  Paul Riley hinted this week that family reasons may send him back to the East Coast.  Stay tuned.  It should be another interesting offseason in Portland.

Like 2014, Sky Blue are playing their best soccer of the season approaching the playoffs.  The only problem is that, like 2014, their worst soccer was bad enough that the late surge was not enough to get them in.  They also dropped some ominous points, the last two coming Saturday night when the Reign scored in stoppage time to get a draw.  They also dominated the Spirit only to lose 1-0, had a would-be, go-ahead goal ruled as not having crossed the goal line in Boston, and blundered late in a loss at the death against the Flash.  If the core comes back as is, it won’t take more than a little tweaking to turn them into contenders.  But they may have to take a stand on Australians Caitlin Foord and Sam Kerr if Australia call them into residency ahead of the Olympics.

The rebuilding Flash showed some signs of coming around but ultimately ran out of steam down the stretch to miss the playoffs for the second consecutive season.  Among the issues looming are the surplus of center backs, long-term injuries to Lynn Williams and Sydney Leroux, and the fading nature of their midfield play down the stretch.  There is also the little matter of Leroux openly wanting to play in Kansas City, where her husband, Dom Dwyer, plies his trade in Major League Soccer.  They did well with four 1st-round picks in this year’s draft, but keeping eighth place will only help the Reign who own the Flash’s 1st round pick in ’16.

Not much went right for the Breakers outside of a four game stretch from mid-May through early June that saw them concede two goals over a four-match unbeaten streak.  But that also amplifies their 43 total goals allowed which is better than 10 more than any other team with a game to go for everyone but the Breakers.  They already began their offseason by announcing the signing of Kristie Mewis with a club option for 2017.  Beyond that they need a lot of help.  They are also on the clock for the 2016 draft…

— Christine Sinclair’s season appears to be over but beyond that there has been precious little information about the condition of the Thorns forward after she was injured two weeks ago against Sky Blue. According to this report the Canadian medical staff was scheduled to be in Portland to examine her over the weekend. The Thorns did not reply to a request for an update on Sinclair’s condition. The league injury report listed her as out last Sunday with a left ankle sprain and left Achilles tendon strain.

— The Breakers’ independent signing of Kristie Mewis means the end of her standing as an allocated player whose league salary is paid by U.S. Soccer. She has been quietly added to the list near the end of 2013