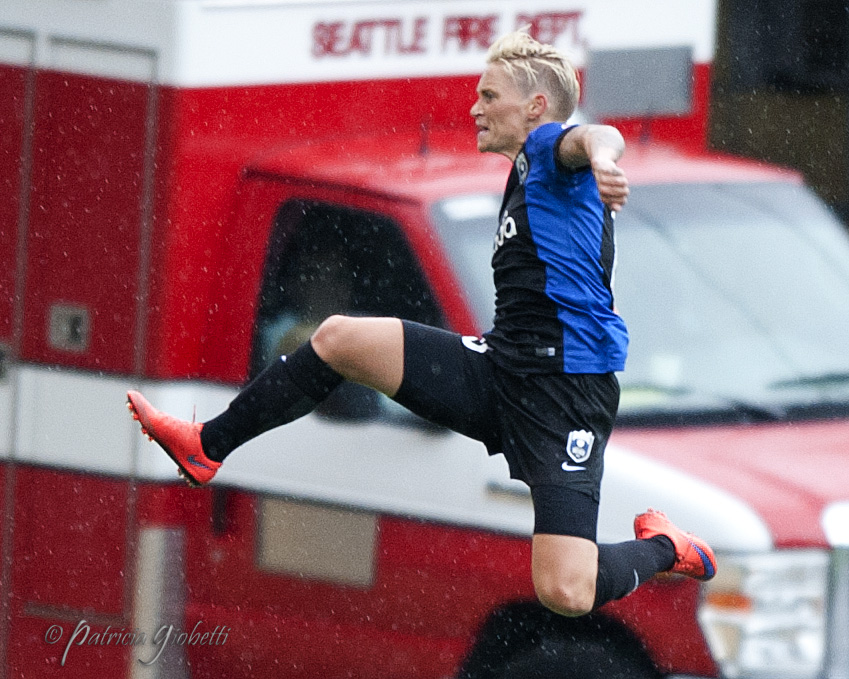 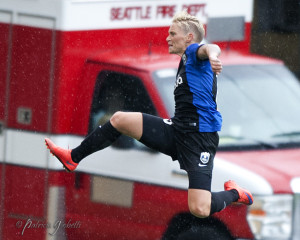 Jess Fishlock scored the equalizer in the 90th minute against Sky Blue FC on Saturday to keep Seattle Reign unbeaten at Memorial Stadium. (Photo Copyright Patricia Giobetti for The Equalizer)

Jessica Fishlock’s 90th-minute header salvaged a 1-1 draw for Seattle Reign FC and kept their Memorial Stadium unbeaten streak alive in a tense battle against Sky Blue FC. It is the second consecutive season the Reign have gone through the regular season undefeated at the old stadium under the Space Needle. The club’s only home loss during that stretch was last year’s final which was played at Starfire Stadium because Memorial was not available. Laura Harvey’s side is 17-0-6 since moving to Memorial Stadium, including a playoff win last summer. They will be back for another semifinal on Sept. 13.

In a match of no consequence to either team in the standings, Sky Blue took an early lead on a Nadia Nadim goal in the opening minutes and nearly rode it to the finish. The Sky Blue goal came in the sixth minute after Fishlock fouled Katy Freels in a dangerous area just outside the Reign penalty box. Nadim sent a majestic ball to the far post that Hope Solo got a hand on but was unable to keep out.

“Sky Blue were the better team tonight. They came here to win,” Reign head coach and general manager Laura Harvey said. “I told the players at the half that they had a choice… I think they showed a lot of character and that’s what this part of the season will take. The ability and the character. We showed that 100 percent.”

Sky Blue did not sit on the lead and had the better of the play for much of the opening 45. They had numerous chances to double the lead but were thwarted either by poor final touches or some quick thinking by Solo. The Reign’s best chance of the half came on a counterattack when Kim Little’s shot was saved by Brittany Cameron.

The possession game switched to the Reign in the second half who spent the entirety of it probing for an equalizer. Sky Blue held up strong though thanks to Cameron and a spectacular effort from center back Lindsi Cutshall. The Reign also had a Little chance at the back post go just wide and a Little free kick slam off the post after deflecting inside the 18.

It came down to the 90th minute in what turned into a driving rainstorm in the Emerald City. Solo started the play by coming way out of her box to handle a Sky Blue clearance. Solo tapped it to Lauren Barnes who was unopposed to the midfield stripe where she played a long ball to Danielle Foxhoven. With two touches Foxhoven found Little on the left side of the box and Little’s cross found Fishlock sneaking behind Kristin Grubka where she headed in the equalizer.

The incredible reaction from the Reign sideline showed that even having clinched the NWSL Shield they remain hungry for points. The equalizer also avoided the team having to officially receive the shield from commissioner Jeff Plush on the heels of a loss.

The Reign (12-3-4, 40 pts.) will visit the Washington Spirit next Saturday to complete the regular season. Sky Blue (5-7-7, 22 pts.) finish at home on Wednesday against FC Kansas City.