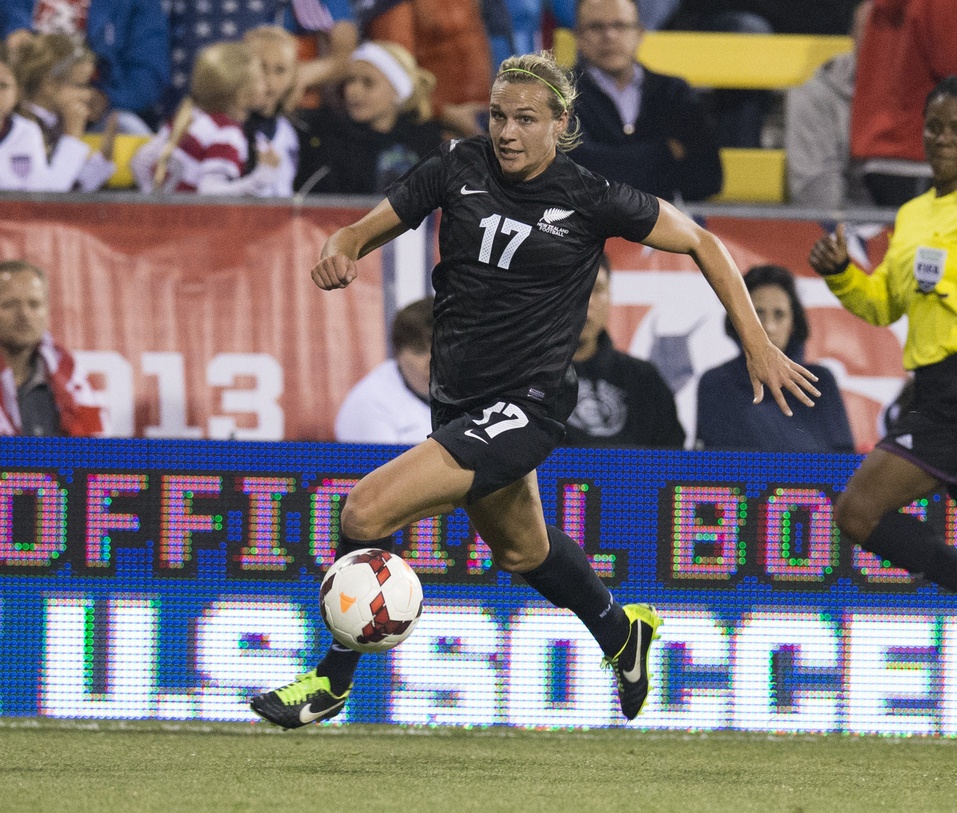 Hannah Wilkinson’s 2015 season is over due to a torn ACL. (USA Today Images)

The 2015 college season is finally erway!  With over 330 teams playing in Division 1, it’s impossible to recap everything but here’s some top news and notes from the week that was:

Duke freshman Taylor Racioppi’s  college career got off rather auspiciously. The midfielder bagged two goals in Duke’s  5-0  win over Fresno State on Friday.  Racioppi was one of the highest recruit in this year’s freshman class and impressed in limited time in last year’s U-20 World Cup. Racioppi netted another goal Sunday against Weber State.

UCLA fell to Long Beach State on Friday night, 1-0 on a 67th minute strike from Vania Robles. With the departure of so many starters, including six players that were drafted into the NWSL last January, there was always going to be a learning curve for the Bruins. More so than most teams, it will take a few weeks before the Bruins settle in. Friday’s loss was the first in the regular season for UCLA since September 2013. It took 183 minutes for UCLA to find the back of the net as they needed double overtime to beat San Diego on Sunday.

Tennessee’s prospects this season took a hit when redshirt senior Hannah Wilkinson revealed that she had ruptured her ACL. The New Zealander has battled injuries frequently in her career with the Volunteers and was granted an additional year of eligibility last fall. The Volunteers were unable to generate any offense Friday night without Wilkinson, tying Lipscomb, 0-0 in double overtime. The Volunteers rebounded Sunday with a 2-0 over Georgia Southern.

Texas goalkeeper Abby Smith scored off a punt at the top of her eighteen yard box against Miami. The unlikely score was the only goal of the match. Sunday’s goal marks the third time the senior has scored for the Longhorns. The play was featured on ESPN SportsCenter’s Top 10. Click here to watch the goal.

Maryland sophomore forward Alex Anthony scored all of the team’s goals this weekend, with the Terrapins securing a 1-0 win over Kent State and 2-0 win over Navy. Just two games into the season, Anthony has already eclipsed her goal-scoring total from a year ago. Last year, the Terrapins were rather goal-anemic, managing just 17 tallies. It will be interesting to see if Anthony can continue to find the back of the net as Maryland faces off against Kadeisha Buchanan and West Virginia next Friday.

The 2014 NCAA Champions downed Southern California, 1-0 off a 83rd strike by Isabelle Schmidt. The Seminoles held USC to just 2 shots.

This Florida won this Sunshine State battle, 2-0 in one of few clashes between top-25 teams this past weekend. Freshman Mayra Pelayo scored the game-winner and junior Savannah Jordan added an assurance goal in the 61st to lead the Gators to victory.

In another top-25 matchup, Virginia Tech edged out West Virginia, 2-1 Sunday with all three goals coming in an eight-minute period. Junior Murielle Tiernan struck first for the Hokies in the 54th minute but Kailey Utley answered four minutes later for the Mountaineers. Candace Cephers notched the game-winner for Virginia Tech in the 62nd minute.