The Lowdown: no shortage of chatter during break 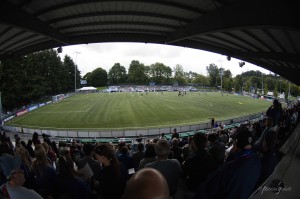 NWSL action returns to the field Friday night for the start of a three-week sprint to the finish line.  What was supposed to be an eight-day break was briefly interrupted by a make-up match that saw the Spirit knock off the Red Stars on a Crystal Dunn goal in stoppage time.  That result put the Reign firmly in control of the Shield race but opened up what could be a frantic battle for the other home semifinal.

Despite the break, there has been no shortage of NWSL chatter.  From the announcement of Portland as the host city for the final to the bizarre bedbug story, the profile of the third-year league has never been higher.  Here are some thoughts about the most recent developments around the league.

Let’s go to Portland:  Out of context it seems fine.  A neutral-site final on a prominent sports station played in the country’s most rabid soccer market.  So why is everyone so up in arms about it? In short, it was communication.  The season began with the weekend of Sept. 26-27 earmarked for the championship match, hosted by the participating team with the better record.  And then came the announcement of the FOX deal.  That was good news for NWSL but buried in the release was a reference to the title game being broadcast on Thursday, October 1.

And then came last week when news tricked out—first reported by Soccer Wire—that the match would be held in a pre-determined site.  After some brief uncertainly the league announced Providence Park in Portland as the site of the 2015 championship match.  More outrage followed, some rational, some not.

Personally, I am a huge proponent of the neutral-site final.  It has obviously been a boon to the NFL, which has practically turned Super Bowl Sunday into a national holiday.  Closer to home, I never thought Major League Soccer should have abandoned the format.  Every league needs a signature event, and the one-off final offers the perfect opportunity.  Already it appears the league is prepared to raise the profile of the week, which the last two years have offered nothing besides the match.  A longer lead-time into future finals will only help in this area.

Why it took so long to make the announcement remains a mystery.  Even if finalizing Portland as the site only happened in the last week, it would have made for good public relations for the league to announce the format change ahead of time.  And even if there were legal or other reasons not to, at some point of another the commissioner could have dropped in one of his interviews something to the effect of, “We are looking at making the final a neutral-site game.”  Instead the sudden announcement less than two months from the match left fans feeling blindsided.

So as usual we must take a long-form approach to this.  If the league is committed to making the final into something of an event then this was the only way to go.  The Thursday night should be fine for television but maybe not so much for travelers.  The flipside is the extra lead-time will make it easier for out of towners to plan ahead (the flip side to that being that those who have limited travel budgets are more likely to have burned through their funds before even realizing they would have so much time to plan a trip to Portland.)

There is also the issue of how to rotate the match.  Portland was the logical choice for the first one, and sources have told me Houston was willing and able to step in if it had not worked out with the Rose City.  Indeed if I was setting a betting line on the 2016 host site, BBVA Compass would be an overwhelming favorite.  Are any other NWSL stadiums/cities capable of hosting?

Rochester is not so easy to get to, but Sahlen’s Stadium is a fantastic place to watch a match and plays well on television when full.  The capacity of the SoccerPlex is less than hat will probably turn out for finals in any of the other three mentioned stadiums but the sightlines and atmosphere are tough to beat.  Memorial Stadium in Seattle can seat about 12,000.  Chicago and Kansas City clearly have outlets to use their cities’ MLS stadiums but would they want to use one of those deals for a match they are unlikely to be part of? What about Sky Blue and the Breakers? And what about the idea of going to a non-league city?

That NWSL has decided to give the final a bit more juice is only good news for the league.  No, it was not handled as well as it could have been.  We can add it to the long line of events and announcements that could have been communicated better but that ultimately are positive developments.

(Writer’s note:  the term “neutral-site” has been a sports standard for decades even though it does not necessarily imply a completely neutral site.  For reference, all three WUSA finals–Founders Cups–were played at neutral, or pre-determined, sites.  The host team never reached the match.  The first 16 MLS Cups followed the same format.  The “host” teams won two and lost one.  Through 49 versions of the Super Bowl, no team has ever reached the game in its home stadium.)

Bedbugs:  So it seems at least one of the Thorns’ hotel rooms in Kansas City last week had bedbugs.  And some Thorns players—Christine Sinclair and Alex Morgan—used social media to get the word out.  It worked to the extent it became a major talking point.  According to a league statement the issue was addressed by hotel immediately, and by FC Kansas City which has since secured rooms at a different hotel for their remaining games (NWSL clubs must provide hotel accommodations for visiting clubs.)

This is one of those nonstories that picked up a life of its own.  And that is not to say it was not important.  Not only are bedbugs annoying little pests, they are able to travel in luggage and remain a problem for the long haul.  But it is hardly the sort of thing that should be dominating NWSL headlines.  But guess what? Four years ago, as WPS approached three complete seasons, much of the talk was over which team would fold next, and who would sling the next arrow in the League v. Dan Borislow battle.  NWSL is steadily chugging towards a fourth season and a majority of the focus is actually on making the league better.  So a little sidebar about hotel conditions is not only a welcome change from past leagues, but also easily correctable.  And let’s face it, anyone who travels even semi-regularly has a horror story or to tell, and hopefully laugh, about.

(Writer’s note:  the name of the hotel in question has been widely reported including on this site.  However my personal view is that there is no reason for the name to appear in this column.)

Victory Tour Schedule:  I’m the first to jump on the inconsistencies of U.S. Soccer funding NWSL while doing its best to ignore it in many aspects.  The recent Victory Tour matches against Costa Rica though, are not an example of that.  NWSL worked an eight-day break into its schedule so that the national team could host games on August 16 and 19.  The only reason any match was scheduled was because the Spirit and Red Stars had to abandon play on June 20 when nasty storms rolled through Benedictine University Sports Complex.

Balancing league and national team not only for players but fans is absolutely vital to moving NWSL out of the nascent phase and into a stable one.  I would go so far as to say it is necessary for the next phase of national teamers to embrace the league on a more public level.  But the club/country battle is one that goes on every day, in every league, men and women.  Some federations handle it better than others.  But it’s not new, and it’s not going away.

All that said, the biggest problem with the Costa Rica matches was the quality of the opponent, not the way they interacted with NWSL.

They play soccer too:  There should be some great soccer over the next three weeks as well.  Three of the four playoff spots remain up for grabs and there are any number of scenarios in play.  At the top the Reign are trying to become the first team ever to repeat anything in women’s pro soccer.  Three WUSA, three WPS, and two NWSL seasons have always seen different regular season and playoff champions.  The Flash finished top of WPS in 2011 and NWSL in 2013 but officially did not repeat.  The Reign are five points clear to repeat as Shield winners and hold a match in hand on the Red Stars and Spirit.

We’ll get this space back to focusing on soccer as well.

Attendance/Free kicks – will return next week!