US women kick off victory tour in Pittsburgh 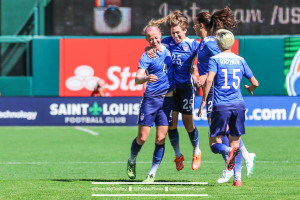 Meghan Klingenberg and the U.S. women’s national team return to action on Sunday. (Photo Copyright Erica McCaulley for The Equalizer)

The United States women’s national team has received plenty of accolades and attention since winning the World Cup on July 5. New York City gave the team a ticker-tape parade, the first of its kind for a women’s sports team. That came after the rally in Los Angeles and before endless media appearances.

But Sunday marks the official start of the victory tour, a 10-game series from August through December that is meant to celebrate the World Cup victory. The U.S. hosts Costa Rica at 1:30 p.m. ET on FS1. (Make no doubt about it, the tour is also a way generate more buzz and revenue; over 41,000 fans will be in Pittsburgh Sunday and ticket sales are booming for the matches that follow, including a sellout for Wednesday in Chattanooga, Tenn.)

[MORE: USWNT to play Brazil in Orlando, Seattle in October]

Costa Rica serves as the opponent for the first two matches, and it is unlikely that Las Ticas will give the United States any sort of trouble. The United States has won all 10 matches against Costa Rica, most recently in the 2014 CONCACAF Women’s Championship final, where the U.S. thrashed a previously impressive Costa Rica team, 6-0. Las Ticas exited their first Women’s World Cup in the group stage in June.

Shirley Cruz, Costa Rica’s generational talent, won’t be available for either match against the United States, which further heightens the disparity between the teams.

The Americans also haven’t lost at home since Nov. 6, 2004, a 96-match home unbeaten streak that, while it includes plenty of cupcakes, is simply astounding given the quality of teams which have passed through American soil over the past decade.

U.S. coach Jill Ellis will only call upon players from her 23-player World Cup roster for this match, although Sydney Leroux is out after ankle surgery, Alex Morgan’s role for the two games is unclear as she recovers from knee surgery; she hasn’t played since the World Cup final. Hope Solo also just returned for Seattle Reign FC from a knee injury.

Ellis could bring in new players to evaluate beginning with a pair of September matches against Australia. U.S. Soccer president Sunil Gulati says Ellis “can bring in whoever she would like” for the victory tour. Ellis must balance celebration with evaluation with the Olympics less than a year away and qualifying taking place in February.

Costa Rica as the opponent on Sunday and Wednesday is a good way to ease into this post-World Cup life for the U.S., a life in which Ellis has a contract extension through at least 2019, Shannon Boxx and Lauren Holiday are retiring at the end of the year and the futures of Christie Rampone and Abby Wambach remain unclear.

One thing clear is that Carli Lloyd is not done taking names after her Golden Ball performance, which is bad news for the rest of the world: