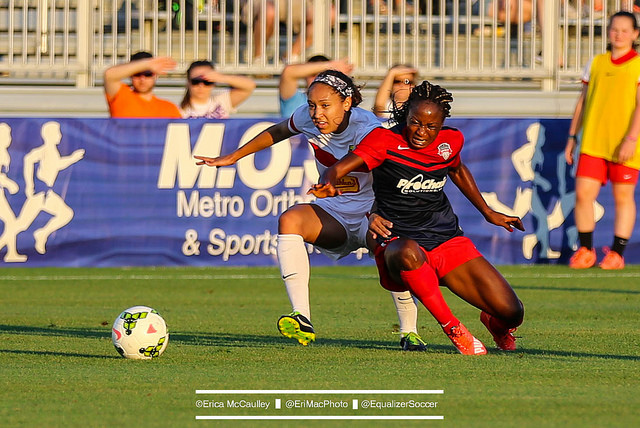 The Flash earned a point on the road vs. the Spirit. (Photo Copyright Erica McCaulley for The Equalizer)

BOYDS, Md. — The Washington Spirit tied the visiting Western New York Flash 1-1 Wednesday night at the Maryland SoccerPlex. Diana Matheson scored in the 16th minute for the home team, but Lynn Williams answered for the Flash in the 90th minute to earn the visitors a point.

Matheson’s goal came off a bobbled save from Flash keeper Chantel Jones. Crystal Dunn got around a couple of Flash defenders to get the initial shot off. Jones was unable to cleanly secure a routine ball and Matheson pounced on it to give her side the early lead.

Five minutes later, Washington nearly extended its lead on a long-range shot by Christine Nairn from about 35 yards out. The shot hit off the woodwork and out for a goal kick.

In the 38th minute, the Flash had four corner kicks in a row but were unable to find the back of the net. It was a lost opportunity for the visitors given their sizable height advantage over Washington.

Sam Mewis got on the end of the second corner, but Ashlyn Harris punched the ball over the net. On the ensuing corner, Michelle Heyman headed the ball towards goal and her header required a save off the line by Spirit midfielder Nairn.

Western New York Coach Aaron Lines had a different view of Nairn’s save. He felt that the ball crossed the line.

Replay from the vantage point available on the stream was not definitive but upon review it does not appear that the whole ball crossed goal line.

“It wasn’t a game of soccer,” Parsons opined, “It was one of the most painful events that I’ve had to watch this year out of all the games that I’ve watched because the referees can’t control the game….It’s gotten to the level now, I said this last week, if the league don’t look in and take control and ask for higher standards from PRO referee organization then we’re cheating ourselves. The league has lost.

“Last week I said if the league do not look into it — and I don’t know if they look into it or not, I’m not getting paid to do that — but if they didn’t the league lost. Tonight if we don’t have an evaluator look at this game, the league has lost again. The league is growing on all fronts. The players didn’t stand a chance tonight. It was an awful game of soccer.”

Jones, who admitted that she should have put her hands a different way on the bobble that lead to the Spirit’s tally, made up for her first-half error with a stellar second half.

“I think that was part of my I need to pick it up and save my team again after that one,” Jones said about her first half mistake, adding, “I spilled the ball but I tried to pick up my effort for my team tried to keep the ball out of the net, so we could try and get an equalizer and that’s what we did.”

Jones made several key saves in the second half to keep the Spirit’s lead to one. Her best sequence came in the 55th minute. Dunn got loose and created enough space to get off a shot to the upper corner while falling the other way. Jones was ready for Dunn’s strike and made a leaping save to deny her. About a minute later, the Flash keeper made an excellent reaction save on Church attempt following a corner kick.

The Flash’s cause took a turn for the worse when Ashley Nick took an elbow to face from Joanna Lohman and had to leave the game after suffering a facial laceration in the 57th minute. The team had its other two substitutions to start the half and thus exhausted all substitutions with more than 30 minutes remaining in regulation.

In the 70th minute, Western New York’s Jaelene Hinkle nearly equalized when she fired a long range shot at goal. However, her 25 yard rocket was just off target and hit the post.

Just before the sides entered nine minutes of stoppage, Lynn Williams equalized for the Flash. Hinkle crossed the ball into the box and the ball was headed up into the air several times before falling to Williams. Harris was able to save Williams’ initial shot but Williams easily drove home the rebound.

Washington controlled much of the game in stoppage time. Dunn got in behind the Western New York defense twice in stoppage but both times her touch took her away from goal, leaving her with a near impossible angle. Megan Oyster nearly sprung Dunn in behind a third time, but Jones, who was off her line, headed the ball out of danger.

The Spirit and the Flash both will take the pitch against the same opponent in their next upcoming matches. Washington will travel to Chicago to face the Red Stars Sunday in this weekend’s only game. Western New York will also play Chicago on the road on August 23rd.