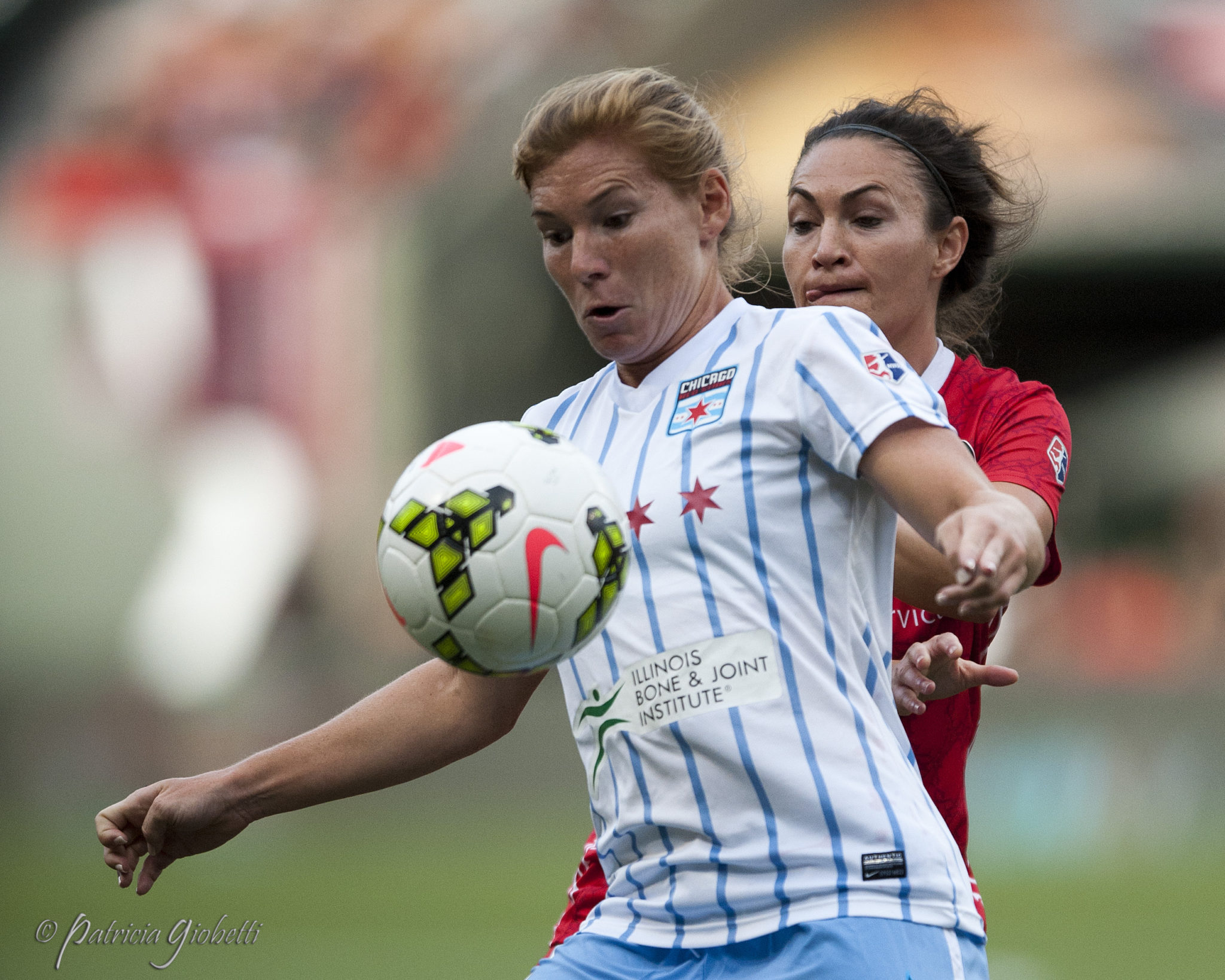 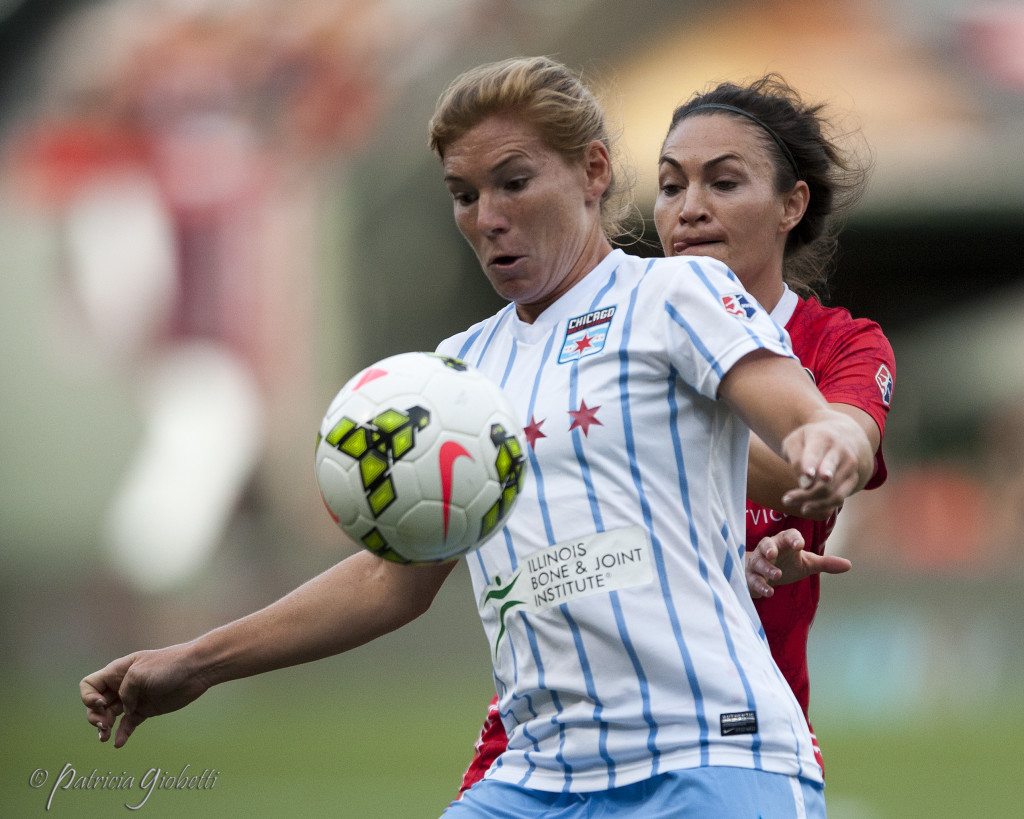 Will Lori Chalupny and the Chicago Red Stars make a push for the NWSL Shield? (Photo Copyright Patricia Giobetti for The Equalizer)

Just when it looked like the final month of the NWSL season might be quiet in terms of which teams will be in and out of the playoffs, the race got tighter than an outgrown sneaker.  The teams that entered last weekend in the second, third, and fourth positions all lost (the first place team, the Reign, did not play).  That meant wins for the teams sitting fifth, eighth, and ninth.  And the other winner, FC Kansas City, jumped from sixth to fourth thanks to a lopsided win over the Flash that changed the goal difference tiebreaker against the Thorns.

Here’s how they stand heading into Wednesday’s full slate of games:

It hardly could have been a better week in Seattle, and the Reign didn’t even play.  The city was announced as the host of a victory tour match for the United States, who will host Brazil on Oct. 21 at CenturyLink Field.  And the Red Stars lost, 2-1 to the Thorns, squandering their game in hand to the Reign and remaining three points off the pace in the Shield race.  The Reign—8-1-3 since a 1-2-0 start—are also in range of a playoff berth.  A home win against the Dash on Wednesday will make it official.  They will also clinch with a draw if FC Kansas City beat the Thorns.  It is time to start thinking about a different script for the playoffs than the one that ended in heartbreak a year ago.

It was only their second loss of the season, on the road against a desperate team, but there were a few troubling aspects to it nonetheless.  The first goal was the result of a horrid gaffe in which Karina LeBlanc and Abby Erceg both went for a loose ball, the result of which turned a dead attack into a free chance for Allie Long after it popped away from both of them.  It also remains to be seen whether Christen Press and Sofia Huerta will combine their individual excellence into a dynamic duo.  Still, there were late chances to equalize and next up is a home match against Sky Blue, who the Red Stars have never lost to.

You can say the Spirit outplayed the Breakers and were stonewalled by Player of the Week Alyssa Naeher.  And you can say that periods of off play have cost the Spirit points this season.  Either one would be true.  They are the swing team right now, though, because by the end of the week they could be in position to make a run at the Shield, or they could be on the verge of falling out of the playoffs altogether.  It should not be overlooked that Christine Nairn and Whitney Church were rested at the start of the match in Boston and that the team played much better with the pair on the field after halftime.

A few weeks ago it looked like the Blues were laying in the weeds ready to ambush the teams above them once the World Cup players got back in the team.  And after they shellacked the Flash without Lauren Holiday it is tempting to get caught up in that same thought process.  But it might be time to concede that this will be a season of inconsistency for last year’s champions.  Can they make the playoffs? Clearly they can.  Can they win it all? For sure.  Can they also finish poorly and miss the playoffs? For the first time, I would say yes.  The Thorns are in town Wednesday night for a matchup that almost always produces something newsworthy.  At least one team will leave the match quite disappointed.

After a tumultuous first half of the season, the Thorns have gotten things on track.  It began with a tough away win at Western New York on short rest, and Sunday they secured their third win in a row, rallying from a goal down early to beat the Red Stars, 2-1.  The difference in the team with the World Cup players in tow is palpable.  Not only are they more dangerous now, but they are playing at a much calmer pace.  No one has been more instrumental in that than Tobin Heath who has worked both flanks with contributions both offensively and defensively.  Huge match in Kansas City looms.

The Dash have now dropped two straight matches since storming into the top-four with a dramatic win over FC Kansas City.  Last season, the Dash finished up with two draws and then six losses for an 0-6-2 mark from July 17 onward.  The last thing they want is to develop a habit of finishing seasons on the back foot.  This is a much different team than last year’s but they will see Seattle in their next two matches.  In 2014, the Dash lost all three times to the Reign scoring two goals and conceding ten.  The first one is Wednesday in the Emerald City.

After a period of improvement, the Flash appear to have leveled off and begun heading the wrong way as the season enters its home stretch.  Samantha Mewis’ effectiveness in midfield has tailed off and the team has not done nearly well enough exploiting the speed of its front line.  There is certainly enough time for the Flash to climb over three teams and into the playoffs but it will take an upward form trend to obtain the needed results.

The win in Houston on Friday may have been the team’s most complete performance of the season.  The talent is clearly there to compete against the elite but they may have run out of time.  A 3-1-0 mark the rest of the way will take them to 26 points.  From there it would take some very specific results across the league to make that number enough to get in.

Despite beating the Spirit on the weekend, the Breakers’ playoff chances are essentially gone.  They will not play again until Saturday, August 22, but they will be eliminated before that if the Thorns-FC Kansas City match does not end in a draw or if the Dash win both of their matches between now and then.

Betos has arrived:  Michelle Betos made a couple of huge saves in the late moments of the Thorns’ win over the Red Stars on Sunday, and at the moment it appears she has made the No. 1 keeper job in Portland her own.  That is a far cry from 2013, when she was usually over-matched while subbing for an injured Hope Solo in Seattle.  Betos’ rise through the ranks of NWSL goalkeepers is what the league is all about.

Becky is the best:  Back when the finalists for the Golden Ball at the World Cup were announced, factions developed as to whether or not Becky Sauerbrunn should have been on the list instead of Julie Johnston.  No matter now, but there is little doubt in my mind that Sauerbrunn is the best defender in NWSL.  Her combination of tactical and technical savvy make her nearly impossible to break down.  In other words, Sauerbrunn is pretty much always in the right place and almost always makes the correct play once she’s there.

Breakers finish home schedule with win:  The Breakers gave their fans some thrills early in the season but then dropped five straight at Soldiers Field before closing out the home schedule with a 2-1 win over the Spirit.  The Breakers were badly outshot on the match especially down the stretch held on through tenacious defending, a superb effort from Alyssa Naeher, and a little luck.  The team is on the verge of missing the playoffs for the third year in a row.  The Breakers will have to analyze all elements of their club going forward.  Boston has the potential to be an elite market for NWSL, but there has not been much to cheer about since the league launched.

— MLS side Orlando City SC has officially thrown their hat in the ring to operate a future NWSL side.  Club president Phil Rawlins stopped short of calling it a definite, but was clear that joining NWSL is “in our intentions and plans.”  It has been nearly 30 days since NWSL Commissioner Jeff Plush said the league was hopeful to make a statement about an expansion timetable within that window.

— Ashlyn Harris was a late scratch for the Spirit on Saturday due to illness.  Kelsey Wys started in her place.  Harris was the backup.

— Looking for a goal, the Red Stars went to a front line of Christen Press-Jen Hoy-Sofia Huerta.  They got chances but no goal.  It would be both fun and interesting to see Rory Dames deploy that trio from the start of a match.  It would place Melissa Tancredi in the role of scoring option off the bench.  Considering that not all of the teams have legitimate scoring depth that would not be a bad option at all.

— Random thought: There needs to be a crackdown on players colliding with goalkeepers.  Already this season Sabrina D’Angelo was injured in a dustup with Liz Bogus.  So far other keepers have been spared serious injury.  I’m all for everyone playing hard but field players must use prudence when coming to the same space with goalkeepers.