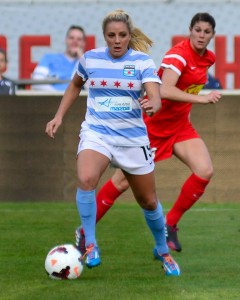 Adriana Leon scored for the Red Stars, but they were held 1-1 by Sky Blue FC

The Chicago Red Stars and Sky Blue FC played to a 1-1 draw on Wednesday afternoon at Benedictine University Sports Complex. The result did favors for neither team. Sky Blue move to 18 points but will end the night at least five points off the pace for the playoffs with only three matches to play. The Red Stars moved to 28 and inched closer to an elusive playoff spot but dropped more points in their Shield race against the Reign.

Adriana Leon scored early for the Red Stars who had it all their way early. But after falling behind 15 minutes in Sky Blue took hold of the match and gradually got to the high ground where they were able to control much of the proceedings after halftime. But after a Sam Kerr equalizer late in the first half they could find no more goals. Sky Blue have still never beaten the Red Stars in NWSL play, losing three times and now drawing five.

The Red Stars created a slew of chances leading up to their goal and had their guests scrambling in the afternoon sun. The closest of the chances was a Danielle Colaprico smash off the corner of the woodwork in the 12th minute.

In the 15th after several minutes of sustained pressure the Red Stars put their noses in front. Julie Johnston lofted a ball to the top of the box where Jen Hoy was able to flick it down to Arin Gilliland charging up the left side. The rookie left back got a cross to the far post, finding Leon breaking in by herself for the easy finish.

Sky Blue took the wakeup call and gradually began to take hold of the match. Still it could be considered against the run of play when they equalized in the 36th minute. Johnston tried to dribble it forward but lost it clean to Kerr, who dribbled into a trio if defenders between whom she found just enough room to slip a shot that beat Michele Dalton to the keeper’s left.

Sky Blue were the more aggressive side after halftime but were unable to find the back of the net. It looked like they were going to go on top in the 86th minute but the ball was correctly called to have deflected off Jonelle Filigno’s hand on the way.

Sky Blue (4-7-6, 18 pts) have three matches left—at home to the Thorns and FC Kansas City with a trip to Houstin in between. They likely need to win all three to be in the playoffs. The Red Stars (7-2-7) are within two points of the Reign who were in action later Wednesday and had played one less match going into that one. The Red Stars are also winless in their last four matches.