FC Kansas City moves into third with win over Thorns 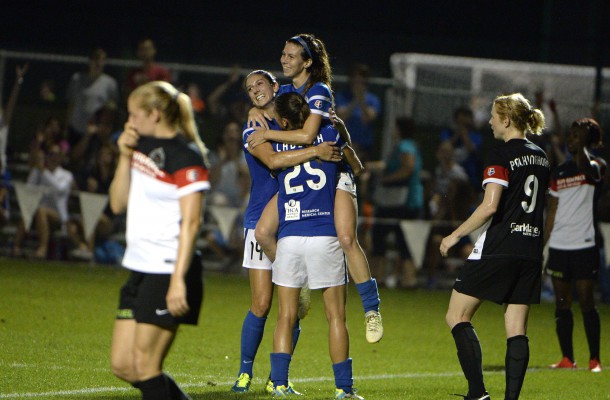 KANSAS CITY, Mo. – Since the first game of the National Women’s Soccer League, the Portland Thorns and FC Kansas City have had some memorable battles. On Wednesday, Kansas City earned a 3-0 win over Portland in front of 2,982 fans. Mandy Ladish, Amy Rodriguez and Erika Tymrak all scored in the final half-hour of the match.

Portland didn’t come away with the win, but they played much better than the final score would indicate.

“Especially when we’re in the cusp of the playoff hunt, it feels real good to get these six points,” Rodriguez said.

As the game opened, both teams showcased their strengths. Portland worked the ball up the middle to Sinclair where she could either shoot or try to find a streaking teammate on the wing. Kansas City’s defensive pairing of Amy LePeilbet and Becky Sauerbrunn would weather any attack and quickly distribute the ball out of danger as Amy Rodriguez would push towards the Thorns’ back line for the pass.

Neither side was able to get anything going through much of the first half. KC had seven shots in the first half to Portland’s three, but none of them were on goal.

Sinead Farrelly suffered a head injury in the 32nd minute after getting in the way of a Yael Averbuch volley shot. In an attempt to protect her face, she put her h.and out and the ball knocked it back into her right eye. Portland wouldn’t comment on the extent of her injury following the game, but Farrelly was walking and alert, although she had a patch over the eye.

In the second half, the Blues were finally able to put sustained pressure on the Thorn’s defense. The effort paid off in the 60th minute as Laddish was able to put home a Leigh Ann Robinson cross for the game’s first goal.

Portland immediately pushed for the equalizer, but KC’s defense held strong and found Rodriguez on the quick counter attack. Portland initially was able to withstand the counter attack, but Heather O’Reilly found Rodriguez from the right side and within a five minute time span, the Blues had scored two quick strikes and led 2-0.

As the score widened, the Thorns never showed any let up in their play. Twice they had players sprinting towards Nicole Barnhart with only one defender in their way, but both times the defender was able to slow the attack long enough to get 10 teammates behind the ball.

In the 76th minute, O’Reilly continued to penetrate the right side of the Portland defense. Making it all the way to the touch line and dropping a lofted pass to Laddish. The second-year midfielder, seeming to feel the defensive pressure, quickly flicked the ball to the far side of the box where Tymrak was wide open and able to put the game away.

For the rest of the game, the Thorns would try to scratch their way back into the game with seemingly everyone but goalkeeper Michelle Betos joining the attack. The seemingly impenetrable duo of LePeilbet and Sauerbrunn were able to fend off and foray into their penalty box. The few times a ball was able to get behind the KC defense, Nicole Barnhart was right there as she continues to add onto her NWSL all-time record number of shutouts.

Kansas City’s defense has been the key to keeping them in the playoff hunt through a sometimes difficult season. In the last two weeks, with the return of several national team players to the team, Kansas City is once again starting to look like the team who rattled off 10-game winning streaks in the past two years.

“I think we have the drive,” said Rodriguez. “Every time we walk on the field, they say ‘reigning NWSL champions’ and that rings a bell in our ears because we want to hear that next year.”

With this win, FC Kansas City moves into third place with 25 points and hosts the Boston Breakers on August 22. Portland is only three points out of the playoff picture for now as they prepare to face Sky Blue FC in New Jersey on the same day.