FCKC, without Holiday, jump back into playoff spot 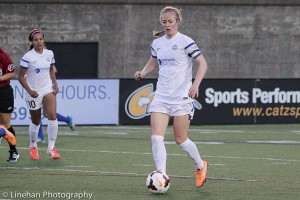 Becky Sauerbrunn’s early defensive hustle helped keep the Flash off the board early. (Photo Copyright Clark Linehan for The Equalizer)

FC Kansas City moved back into the top four with a 4-0 rout of the Western New York Flash on Saturday night at Swope Soccer Village. The game was 1-0 approaching the 70th minute with the Flash hanging tough against the hosts. That was when Yael Averbuch made it 2-0 by popping in a direct free kick. The Blues dominated the rest of the way picking up goals from Heather O’Reilly and Jen Buczkowski. Leigh Ann Robinson scored the Blues’ goal in the first half.

The entire match was not so easy for FC Kansas City though. The Flash hit a crossbar in the first half and nearly had one when Nicole Barnhart hit an errant clearance that bounced off a player and went behind her. Only the hustle of Becky Sauerbrunn kept it scoreless at that point.

It remained scoreless until the 38th minute when Robinson, O’Reilly, and Mandy Laddish worked some pretty soccer on the right side. Laddish made the final pass to Robinson who overlapped, leaving Flash left back Jaelene Hinkle stranded high. Robinson cut toward goal and as Becky Edwards closed her down she poked a shot between the legs of Flash keeper Chantel Jones.

The second goal came in the 69th minute after Erika Tymeak won a free kick from the 25-yard range and recent substitute Yael Averbuch stood over it. The former Flash player drove it around the wall and into the top corner of goal, leaving Jones with no chance. It was Averbuch’s second goal of the season, both off free kicks.

From there the Flash were left to chase the game. That allowed O’Reilly to streak down the right flank and beat Jones on a counter. Later Frances Silva, also just in off the bench, put a beautiful cross to the far post where no Flash player marked Buczkowski. A sliding finish made it 4-0.