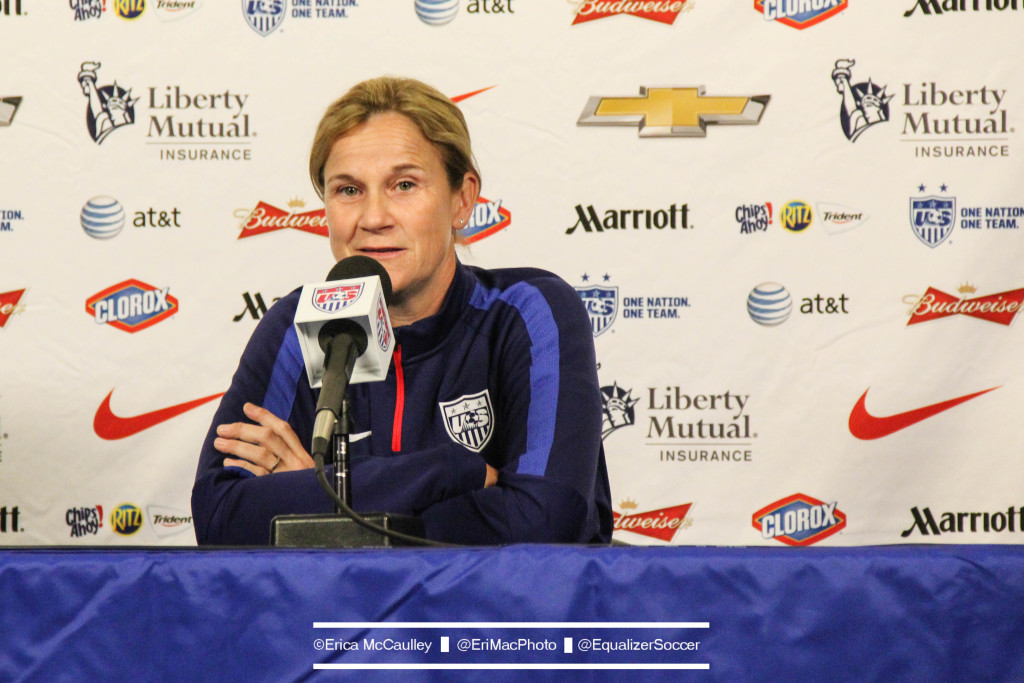 Jill Ellis faces plenty of challenges ahead of the 2016 Olympics. (Photo Copyright Erica McCaulley for The Equalizer)

Jill Ellis’ dilemma hasn’t changed, but the circumstances have.

The United States women’s national team coach was rewarded with a new multi-year contract on Wednesday, exactly one month after leading the U.S. to its third Women’s World Cup title and exactly one year before the Opening Ceremony of the Rio 2016 Olympics, Ellis next challenge.

“Building for the future is always part of a national team coach’s priority and evaluating is always a mainstay in what I’m doing,” Ellis said.

When the now 48-year-old Ellis took the job in May 2014, she was asked to keep a half an eye on the future but, most importantly, to win the 2015 Women’s World Cup. Anything short of that would have been a failure. That was a much more explicit demand placed on Ellis than had been put forth for her predecessor, Tom Sermanni, whose balance of developing and trying out younger players was ultimately a factor in his unceremonious ousting from the role.

The next goal is a fourth straight gold medal at the Olympics, which is almost ludicrous to even type. The Americans have been a silly sort of dominant at the Olympics since the introduction of women’s soccer in Atlanta in 1996, winning four of the five gold medals, including the last three.

The turnarounds to the Olympics – now less than a year away – and to qualifying in early February are quick ones. Specifics regarding big-name players still remain unclear. Shannon Boxx, 38, and 27-year-old Lauren Holiday announced they will retire at the end of this year, but 40-year-old defender Christie Rampone says she plans to play in the Olympics “if my body holds up,” and all-time world goal-scoring leader Abby Wambach is yet to commit to future plans.

Ellis says she has had minimal contact with her 23 players from the World Cup since winning the title, other than to check up on those who are injured. But some tough conversations loom with the Olympics coming and only 18 players allowed on the roster.

The U.S. women begin a 10-game victory tour on August 16. That tour stretches into December, leaving little time for Ellis to evaluate new talent for the Olympics. Gulati emphasized that Ellis “can bring in whoever she would like” for the victory tour, and she may have to in order to evaluate new players – financial implications of victory tour bonuses for World Cup players notwithstanding.

“Ultimately for me, it goes back to if a player is good enough and will help us be successful, then that’s the priority,” Ellis said when asked about decisions regarding Rampone and Wambach, specifically. “But it is beyond the Olympics. With now my position and the retention now, I certainly will be looking toward the future as well as what’s directly in front of me.”

It’s impossible not to notice the NWSL season put together by Crystal Dunn, the last player cut from the United States’ World Cup roster. Dunn took the bad news from Ellis in April and determined that she was going to use the NWSL season to better herself. She leads the NWSL in goals after a hat trick last week and she is the runaway MVP with a month left in the regular season. At some point soon, she deserves the opportunity to re-prove herself at forward (not fullback) against international competition. With Sydney Leroux out injured and Alex Morgan still not 100 percent, now could be the time for Dunn to do that – if she gets the call.

“In my mind it certainly is a celebration of the summer but with such a quick turnaround to Olympic qualifying, it also has to be an evaluation period,” Ellis said of the coming months. “So while it is, we want to honor the players in the past, I think because the Olympics is right around the corner and qualifying in February – every time I’m with the team, and even in a World Cup, as a coach, you are constantly evaluating.

“So, certainly this period, although we’ll get a lot of players a lot of time in terms of players that have played, very much these are good opponents coming and I want to use this opportunity to evaluate and assess for the future.”

The U.S. will play Costa Rica twice in August, Australia twice in September and Brazil twice in October, with the final four matches tentatively taking place in December. Olympic qualifying will take place in early February across multiple cities in the United States, as The Equalizer reported earlier this week. Before that, there will be the usually January training camp, with the potential for a friendly that month as well.

On Wednesday, Ellis refuted the notion that U.S. players must play in the NWSL in order to get a look at the national team level, although that has been widely reported over the past 18 months and even softly acknowledged by Gulati. Twenty-two of the 23 players on the U.S.’ World Cup roster play in the NWSL; Abby Wambach, who isn’t playing for a club at the moment, was the only unattached player.

“In an ideal world, I think our league is established, it’s of a high quality,” she said. “Yes, would I like to see players here because we could then have that access to them, certainly. But we never will overlook a player that’s overseas if they can help us.”

Lindsey Horan, who plays for PSG in France, is a player who has pushed for inclusion. She has two career caps, both under Sermanni in 2013. Horan recently decided to re-up with PSG rather than play in the NWSL.

Gulati declined to address the specific length of Ellis’ contract, but made several references to the 2019 Women’s World Cup.

The mood will be light for these victory tour games, but Ellis has some tough decisions looming.

The Lowdown: The anatomy of a hat trick
NWSL Week 17 Preview: Red Stars-Thorns on FS1