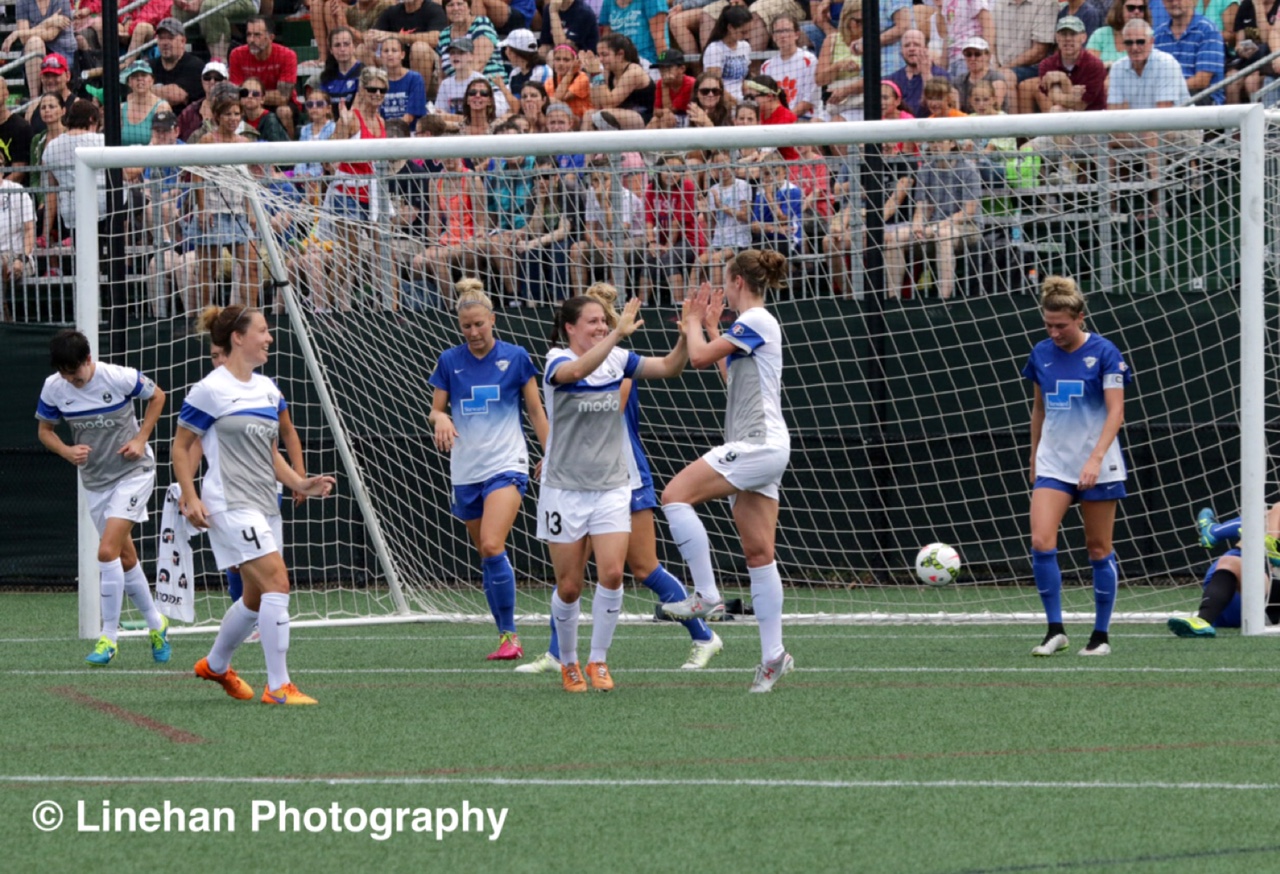 BOSTON — As the calendar flips from July to August, attrition and fatigue begin to become big factors in a congested NWSL schedule. In a battle of self-admittedly tired squads on Saturday afternoon, it was Seattle Reign FC who dealt with those better, beating host the Boston Breakers, 2-1 before a sell-out crowd of 4,325 at Soldiers Field Soccer Stadium at Harvard University.

The Reign (9-3-3) have lost just once since April 23 and (at least temporarily) are four points ahead of Chicago in the race for their second straight NWSL Shield. The sometimes convoluted NWSL schedule – working around both the World Cup and subsequent U.S. national team victory tour – means that (after three games and two cross-country trips in seven days) Seattle will play just once in the next three weeks.

Seattle faces just one more match in the Eastern time zone, their season finale at Washington on Sept. 5. And so Saturday was just about survival.

“The beauty about a manager like (Laura) Harvey is she allows us to tell her how our bodies feel,” said Jess Fishlock, who was quiet by her lofty standards Saturday. “If she had said, ‘You have to go high intensity’, we would have listened because she is the manager, but when she says, ‘You have to manage yourself now because you’ve had three games in however many days and then we have to travel and then we have to play’. She said, ‘We just have to get through this game’. And so I literally just walked around in practice this week.”

The match itself started slow Saturday, with Boston – dealing with injuries of its own with Kyah Simon out because of a hamstring issue and Rafinha now possibly lost for the season – content to allow Seattle to possess the ball. Kim Little nearly broke through twice in the 13th and 14th minutes, but Alyssa Naeher stopped her both times.

Seattle finally made their possession pay off in the 24th minute, when Naeher came for a corner kick, but didn’t get there, allowing Beverly Yanez to finish at the back post for her ninth goal of the season.

Ten minutes later, Boston equalized on a rare attack, but it was a beautiful goal; rookie Suzane Pires sent an inch-perfect cross in for Kristie Mewis — one of the few bright spots for the Breakers this season — to head home her team-leading fifth goal of the campaign and tie the game at 1-1, where it stayed until halftime.

The Reign couldn’t find many ways through to start the second half until Little was dragged down by Julie King and dispatched the ensuing penalty in the 59th minute. It was a tough afternoon for King, who probably had Boston’s best chance to equalize in the 78th minute, but her open header sailed high off a corner. Four minutes later, she was shown her second yellow card and sent off when she dragged Yanez back to prevent a counter.

(King will miss Wednesday’s game at Portland and Breakers coach Tom Durkin said she has never played at Providence Park in front of the huge Portland crowds.)

Mewis came close a couple of times in stoppage time with speculative efforts, the second an ambitious volley from 30 yards out that just sailed over the crossbar.

“We have to do better with our possession,” Durkin said. “That was one of the keys leading up to the game and in pregame. We passed the ball poorly. When we were able to hold the ball, we turned the game a little bit because we were able to give them something else to do. Then they had to defend. All in all, we’re still just a couple of players short. It’s been a taxing stretch for us, and we’re beat down a little bit mentally because no one likes to lose.”

Seattle’s third-string goalkeeper Caroline Stanley was forced to make just one save, and it may be her only appearance of the season (Haley Kopmeyer is expected back for Seattle’s next game on August 12, as is Megan Rapinoe and there is an outside chance Hope Solo might be ready, too), but she was perhaps the most animated Seattle player when the final whistle blew.

“The injury report doesn’t lie,” Harvey said. “It is the way it is because of the short space between games. Credit to players like (Fishlock and Little), they have that desire and fitness level to make sure they can be fit and available for everything. This week had to be light, we didn’t do much.”

Little uncharacteristically exploded when it looked she was clearly brought down by Kassey Kallman in the 65th minute in the penalty area, but she didn’t get a second penalty kick call. Little was eventually cautioned and had to be pulled away by teammates to prevent a second yellow.

“I get like that on occasion when I think a decision is wrong,” Little said. “But after that, I was fine, I was just frustrated and obviously I let it out by making a lot of noise. We did well to contain them and get three points, so it didn’t affect the game.”

Said Harvey: “We can joke about it luckily, but the tone of this press conference might be much different if we hadn’t won.”

Meanwhile, while Seattle gets to rest, Boston – already at the bottom of the table (3-9-3), is now winless in eight and faces a cross-country trip to Portland in mid-week before coming all the way back to Boston to play Washington in its final home game next Saturday. The Breakers then finish the season at Kansas City, Seattle, and Houston, meaning keeping morale up might be a difficult task for Durkin and his staff the rest of the way.

“At the beginning of the year, we said it was step one of a three-year rebuilding process and the girls were really put off by saying we were trying to rebuild,” Durkin said. “It’s hard losing. Now, we know we still have to make a couple of acquisitions, we have to do better in the draft next year to bolster the team. We’re in all these games. But we’re not quite there.”