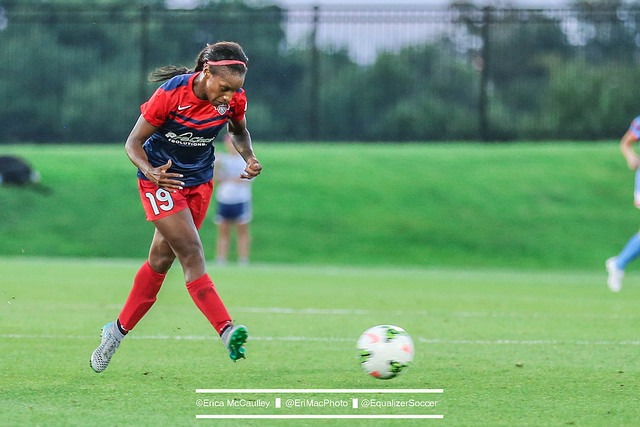 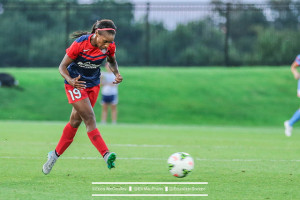 Crystal Dunn scored a hat trick in the first half on Saturday. (Photo Copyright Erica McCaulley for The Equalizer)

BOYDS, Md. — Crystal Dunn led the Washington Spirit to a 3-1 win over the visiting Houston Dash on Saturday night with a first-half hat trick. With the three goals, Dunn now leads the league with 12 goals in 14 games this season.

For the second week in a row, the Spirit came out of the gate struggling to hold the ball or gain any momentum. Washington endured an early barrage from the Dash. The Spirit had trouble clearing the ball while Houston was on the attack but the Dash were denied a goal through a combination of off-target shots and phenomenal goalkeeping by Ashlyn Harris.

The best sequence of the early minutes came in the 8th minute, when the Dash’s Kealia Ohai fired a shot at the Spirit’s net. Harris made an one-handed save to keep the score level.

Christine Nairn looked to have the opening strike of the night when she rocketed a free kick towards the left corner in the 23rd minute, but Dash goalkeeper Erin McLeod made a full extension shot to keep the well struck shot out of net.

Dunn scored her first goal of the night in 28th minute after slicing and dicing her way through five Dash defenders before managing to get off a shot. She and McLeod collided on the play and McLeod suffered a skin laceration and had to be subbed off.

Washington’s lead was quickly extended once play resumed as Dunn once again beat the Dash’s backline. This time Dunn’s strike was assisted by Diana Matheson.

The Spirit’s final goal came in stoppage time of the first half came off a corner served in by Nairn. Dunn headed Narin’s service into the net. Dunn’s header represented both the first hat trick in team history and the first headed goal for the season for the Spirit.

“As bummed as I was about not being called to the World Cup, I’ve been very focused on defining myself as a player and I carried that into this game,” Dunn said postgame about her form and her hat trick, “Obviously, there’s a lot of hype, there’s a lot of great players on the opposition team and I think I kind of used that as momentum to just be like you know they’re a great side (but) I’ve been working hard this season and I’m going to throughout this game.”

In the locker room at halftime, Dash head coach Randy Waldrum challenged his side to focus playing well in the second part of the game and not on the scoreline. He was impressed with the his team responded in the second half.

“What I asked of them at half time was don’t let the game get away from us,” Waldrum explained, telling his side, “‘Don’t worry about the score. Just go win the second half and let’s show some pride’ and I thought we were really good in the second half. Not only got the goal but they cleared a couple off the line. I actually thought we could have nixed one more in the last few minutes.”

Waldrum’s counterpart, Spirit head coach Mark Parsons, saw the second half differently. Parsons said that his side’s play in the second half was driven by the need to secure 3 points for the playoffs.

“It was going to turn into a boring second half but we needed to manage the game,” Parsons said. “Three points at home. This was a crucial game for playoffs. We’re still chasing Chicago and Seattle for hosting a playoff. We needed to get 3 points so driving on and getting more goals wasn’t a priority.”

Melissa Henderson, who was subbed on to start the second half, was a key element in the Dash’s second-half surge. Houston managed to get a goal back in the 74th minute when Jessica McDonald headed in a wonderful cross by Henderson. The goal came just minutes after Henderson nearly scored on a point-blank shot that required a reaction save from Harris.

The Dash weren’t able to decrease the deficit any further though despite controlling much of the last 20 minutes. In the 79th minute, a powerful shot by Carli Lloyd was saved off the line by centerback Estelle Johnson.

Lloyd was a key figure in the Dash action in the final ten minutes as well, striking two minutes after Johnson’s save off the line with another rocket. Unfortunately for the Dash, the ball bobbled around the box a bit but the Spirit eventually were able to clear.

Lloyd also had Houston’s last promising opportunity of the match. She fired a long-distance shot that just missed the post. Lloyd was left off the score sheet for the first time since the final group game of the World Cup.

Saturday’s game finished up a difficult stretch for the Dash, playing four games in 12 days. Waldrum admitted his team was tired but credited the Spirit with a quality performance. Houston will look to rebound next Friday against Sky Blue at home.

The Spirit will now embark on a difficult stretch of their own. They will play three games in a nine-day stretch. Parsons hinted that the Spirit could be playing a lot more “boring” or “sensible” soccer in the future as they look to climb closer to solidifying a spot in the playoffs. He pointed at games in Chicago last year that his side gutted out wins despite seeing little of the ball. The Spirit travel to Boston next Saturday.

As eventful as Saturday’s game was the most memorable moments of the night’s match weren’t directed related to the result or even what happened on the pitch. Before kick off, the Spirit honored Niki Cross, a 2014 member of the team, with aptly colored blue and orange flowers as well as an announcement before the Dash defender played in the final match of her career.

“So many people come in and out of my life with this job and she’s one that’s always stayed and had my back through good times and bad and pushed me to excel and get to the place I am today,” Harris said about Cross, who she called her best friend. “I owe a lot of credit to her. It’s an emotional ride for us for her to end her last game here. It was an emotional moment for us and I know that she’s going to be incredible no matter what she does. She’s an incredible human being.”

When Cross entered the field of play in the second half, she also received a warm welcome from the crowd despite playing for the road team.

Another endearing moment came after the game when a woman who suffers from Amyotrophic Lateral Sclerosis (ALS) accomplished her ultimate bucket list goal, meeting the Spirit’s Ali Krieger and the Dash’s Lloyd. The fan got her wish fulfilled and then some as she to meet the entire Spirit squad as well. The team signed autographs and took pictures with the fan.

The bucket-list wish was accomplished with assistance from the Washington’s supporters group, the Spirit Squadron, who alerted Spirit staffers about the woman and her wish. One member of the Spirit Squadron even gifted the fan a jersey.

As quick as we are criticize NWSL front office staff for shortcomings, the Spirit’s staff deserve acknowledgment for taking the time to facilitate the meeting while dealing with the demands that come with a packed house and increased media attention. As memorable as Dunn’s hat trick was, this moment transcended the game itself.