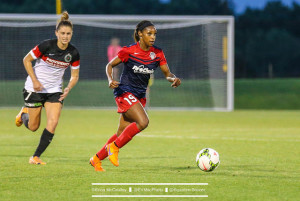 BOYDS, Md. — Crystal Dunn scored late to preserve the Washington Spirit’s home unbeaten streak against the league-leading Chicago Red Stars on Saturday at the Maryland SoccerPlex. Her equalizer erased the Red Stars’ lead off a Christen Press goal in the 30th minute. Press’ strike was her sixth in five games this season.

Chicago came out firing against the Spirit, forcing Ashlyn Harris into several saves in the opening minutes of the game. In the 2nd minute, Press set a ball back to Adriana Leon who fired a shot at goal. Harris made the save and was tested again when Press took a second shot. Harris was again up for the challenge. The Red Stars fired in a third shot that hit the side netting.

The Spirit came out flat against the Red Stars and had trouble manufacturing opportunities throughout the first half.

“We didn’t want that to happen obviously but we kind of half expected it,” Spirit midfielder Diana Matheson said when asked about the flat start. “We have new faces in, new people, new squad. It felt like almost a first game of the season type of feel where there’s a lot of good players around each other but there just not that used to each other.”

Spirit coach Mark Parsons had a different view of the flat start and took some of the blame himself, admitting he got it wrong tactically.

Laura Del Rio managed Washington’s best chance of the half in the 10th minute. The chance came off a short cornerkick and required a huge save by Karina LeBlanc to keep the game level.

Although Chicago had the majority of possession, the Spirit held them at bay past the hour mark. Chicago took the lead in the 30th minute when Press took a deadly accurate shot from 25 yards out and found the lower left corner.

The Spirit’s cause took another hit in the 41st minute after Del Rio got caught up in a challenge at midfield and had to leave the game. Del Rio was on the field down on the field for several minutes and had to be carted off the field.

Goals from each side almost materialized In the second half off center back errors. The Spirit nearly found a goal in the 60th minute, when Julie Johnston almost kicked in a Spirit free kick. A minute later, Washington’s Megan Oyster botched a back pass to Harris that was intercepted by Press, but she couldn’t muster an opportunity off of it as the ball when over the line.

The game opened up in the second half as the Spirit looked for a goal to even the score and Red Stars wilted due in part to tired legs. Red Stars head coach Rory Dames admitted that Washington had the better of the last twenty minutes of the game but said scheduling and nothing else.

“I think you saw the imbalance happen in the last 20 minutes when somebody in this league has to play midweek and someone else doesn’t,” Dames commented post game.

The Spirit tied the game in the 83rd minute off of a crazy sequence in their attacking half of the field. Francisca Ordega, who came on for the injured Del Rio, took on two Red Stars attackers and fired a shot. The shot was blocked, but fell to Nairn. Nairn found some space and fired a shot that was blocked. The deflection fell the Dunn to who’s shot beat Karina LeBlanc.

Following Dunn’s strike, was high tempo and each side created chances to no avail. Red Stars’ Samantha Johnson saved a Spirit off the line and Harris made an incredible save to preserve the scoreline.