Lloyd ‘lost all respect’ for Flash for handling of trade 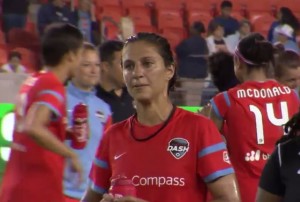 Carli Lloyd with the Houston Dash.

Angering Carli Lloyd never ends up well for an opponent. That has been seen time and time again: the 2008 Olympics, the 2012 Olympics and the 2015 World Cup come to mind.

Lloyd returns to Rochester, N.Y., this weekend, and it’s clear that she is still miffed over the manner in which she was traded way from the Western New York Flash to the Houston Dash last October. Lloyd says that nobody from the Flash contacted her prior to the trade.

“To not have the decency and respect to call me prior (to the trade) and say, ‘Hey, here’s what we’re thinking. The next couple years are busy for you (with the World Cup and 2016 Olympics),’ or whatever,” Lloyd told the Rochester Democrat and Chronicle’s Jeff DiVeronica. “To tell me on the spot like that was pretty low.”

Lloyd was traded to Houston in the middle of CONCACAF World Cup qualifying. When I reached out to Lloyd at the time, she politely said that she was just focused on World Cup qualifying. The storm blew over, to some extent, but it is front and center again with the Dash — led by World Cup hero Lloyd — in Rochester to play the Flash on Saturday.

“That’s the reason no one wants to go play there,” Lloyd said about the Flash and the way which she was traded. She added: “I have lost all respect for the organization.”

Lloyd was traded to Houston on Oct. 16, 2014, in exchange for midfielder Becky Edwards, U.S. teammate and defender Whitney Engen and a third-round pick in the 2016 NWSL Draft.

Lloyd scored a hat trick in the World Cup final earlier this month to lift the United States to its third World Cup title. She scored in her first game back with Houston on Monday in a 1-1 draw with FC Kansas City.