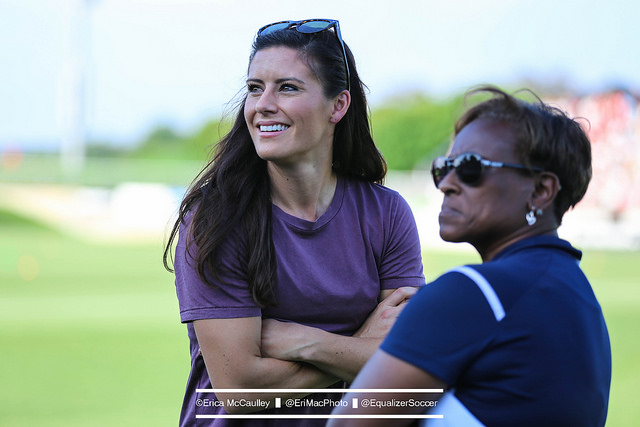 The Washington Spirit, like every NWSL team, are in a period of transition as they welcome new players and welcome back those who participated in the 2015 Women’s World Cup.

And Washington head coach Mark Parsons hinted last week that one of his World Cup stars may not go back into the spot she previously held.

Parsons revealed last week that he’s looking at putting Ali Krieger a different position than the one she’s played for much of her time with the Spirit: center back. He’s long been planning on testing the U.S. national team right back at two different areas of the field.

“I’ve spoken to her and told her before she went (to the World Cup) I said, ‘By the way after you win a World Cup, I’m probably going to look at you in these two areas,’” Parsons said. And she’s like ‘Wherever you need me, I’ll be ready’ and one of them is very different for what’s she’s played.”

Parsons could be planning to play Krieger in holding midfield role. The Penn State product has made a cameo appearance or two in the position during her time with the club and Parsons believes having her play in the center of the pitch allows her to have the biggest influence on the game.

Regardless of where he decides to play Krieger, Parsons has some difficult lineup decisions to make for his present squad. He feels his team is the deepest Washington has ever had.

“I wrote the list of players that we will have in the very immediate future and I think it’s breathtaking,” Parsons said last week prior to his World Cup players’ return. “It puts a lot of pressure on me and the staff because when they are all here there’s no excuse.”

During the World Cup, the Spirit added three participants of the tournament to the roster, including Australia’s Hayley Raso, who caused Seattle problems late in last Saturday’s 3-0 victory. The team also added two players from the Nigerian national team, Josephine Chukwunonye and Ngozi Okobi to the team, the latter of which assisted on all three Nigerian goals in the World Cup. Parsons believes Okobi has the potential to be “one of the most talented we’ve ever seen” in Washington.

Chukwunonye’s biggest asset might be her versatility as she can play anywhere on the back line. How Parsons decides to employ her will be interesting because, except for a couple of outings, the Spirit’s back line has been sturdy this season. Washington has recorded three shutouts already this season after managing only four a season ago.

The biggest question mark surrounding the team may well be the status of Mexican internationals Arianna Romero and Veronica Perez. The two are currently competing in the Pan Am Games in Toronto. The club thought the pair would report straight after the World Cup and last week Parsons admitted he didn’t know when or even if the two would be a part of the Spirit this season. For Parsons, it’s not just a matter of when they’d arrive but if they’d make the 20 player roster.

“I’m trying to watch as much footage as I can,” Parsons said last week regarding Perez and Romero. “This will be the deepest roster in the league and it’s going to be tough. So that’s been very frustrating. That’s the bottom line. It’s been very frustrating. I respect the players in wanting to play for their country and the owner in wanting to have the best club side in the league.”

Always a bridesmaid, never a bride. That phrase would aptly describe the Washington Spirit Reserves. For the fourth time in as many seasons, the Spirit Reserves (formerly known as DC United Women) will play on the final weekend of the USL W-League season. The first three trips to the final four haven’t ended with the Spirit hoisting the trophy. Could the fourth time be the charm?

The team certainly thinks so. The Spirit Reserves were the only side in the league to go undefeated this season. It’s the second straight year they’ve done that in the regular season. In fact, the only team to beat them in the past two seasons, the LA Blues in last year’s W-League final, are no more.

“We usually do pretty well in the regular season. It’s pretty normal for right now,” said forward Ashley Herndon, a rising junior at James Madison and the only holdover from inaugural DC United Women’s team. “The talent just keeps getting better and better each year, so I think this is our year.”

Washington boasts a W-League roster that would make almost any other team in the league envious. Offensively, the Spirit have multiple scoring threats. Harvard’s Midge Purce and Florida’s Meggie Dougherty-Howard have each notched eight goals, while Duke’s Imani Dorsey has added seven more. Austrian international Sarah Zadrazil, who is capable of both scoring and setting the table for her teammates, has four goals and four assists on the season. On the other side of the ball, the Spirit boast to U-23 U.S. players in Andi Sullivan and Carson Pickett.

If the Spirit win their first championship this weekend, the new format of their conference and teams that comprised it may play a role.

“I think we feel good… I think we came through a tougher conference this summer than we did in previous summers the Southeastern Conference from top to bottom was more challenging so we’re pleased with that,” assistant coach JP Sousa said about his team’s chances of winning this weekend. “So we feel we’re going to be a better squad and whoever we play in the semifinal we’re going to go for it to get to that championship.”

Sousa’s thoughts were echoed by one of his captains, Amber Stobbs, who a recent Hofstra graduate.

“I think Charlotte Eagles were our toughest team and they compared to teams we face in the championship last year,” Stobbs said. “They compare to how Ottawa Fury (a final four team last season) moved the ball. Last year we didn’t have that. We turned up to the championship last year, we hadn’t had the competition that we were about to face and it came at us hard. We dealt with it and then unfortunately in the final we got battered.”

This season, Washington’s conference was the only one not to host a playoff game between the top two teams in the conference. To advance to the semifinals, the Spirit Reserves had to win the regular season championship, which may have had a couple of benefits for the team. First, the Spirit got an extra week just to practice and prepare for the finals while their opponents had to remain focused on winning a playoff game. Secondly, in adopting a winner-take-all approach for advancing, every game became like a playoff game for Washington.

“If you look at it, it added some pressure but it was good pressure and really let these girls understand the importance of performing every week,” Sousa said of the Southeastern Conference’s format.

The Spirit Reserves aren’t a perfect team, as illustrated by their three draws on the season. The biggest weakness of the team is in between the pipes. Unlike last year, the Spirit haven’t been able to play the same goalkeeper nearly every minute of the season. Instead, they’ve had to piece together starts this season.

“The players that we have are good, it’s just trying to make that work too,” Sousa commented on the goalkeeping situation. “I’m to give Kaitlyn (Jensen) all the credit. That girl just finished high school and she’s stepped in and played what six games is it? And she’s done a great job so we’re really happy with that. Caroline Casey, who’s a William and Mary player, she was here. We knew she could be here at the beginning of the summer but it was dicey at the second half…”

This weekend is a busy and important one for the Spirit organization as a whole. The Spirit Reserves will face Quebec Dynamo ARSQ Friday at 5 p.m. EST in Laval, Quebec (Laval Comets and Colorado Pride play in the other semifinal). All games of the W-League Final will be streamed on the league’s Youtube channel. The Spirit professional team, meanwhile, will face the first-place Chicago Red Stars at home Saturday in a game that could have significant playoff implications. That game will kickoff at 7 p.m. EST.