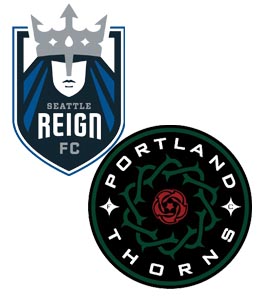 A record crowd is expected in Portland for the renewal of the Cascadia rivalry that will also usher in the latest deal with FOX.  Here is a look at the two midweek matches for Week 15.

Points of Interest:  The second meeting in five days between the only two teams to miss the playoffs in both 2013 and 2014.  The Breakers held the Red Stars in Chicago but still find themselves six points out of fourth place while the Red Stars remain atop the league.  Abby Erceg is doubtful for the Red Stars, but her position should be amply filled by golden ball nominee Julie Johnston.  The Breakers have been up and down defensively this season and will be hoping that limiting the Red Stars to one goal on Saturday is the beginning of another strong run for the back line.

Points of Interest:  The Cascadia rivalry blossomed in its second season when the Reign beat the Thorns in the 90th minute and later by 5-0 before the Thorns beat the Reign on the final day of the season to get into the playoffs.  This one is expected to be played before a full house at Providence Park.  The Thorns have been playing 3-6-1 but have several players returning from various absences so it is anyone’s guess how Paul Riley lines them up.  The Reign, exiting their worst performance in two years, should have Megan Rapinoe back to add width to the attack as well as Kendall Fletcher for the back line.  Not available through injury though are Alex Morgan for the Thorns and Hope Solo for the Reign.  The teams will play again Sunday in Seattle and then not again this regular season.