Sky Blue rallies to draw Flash in US players’ return 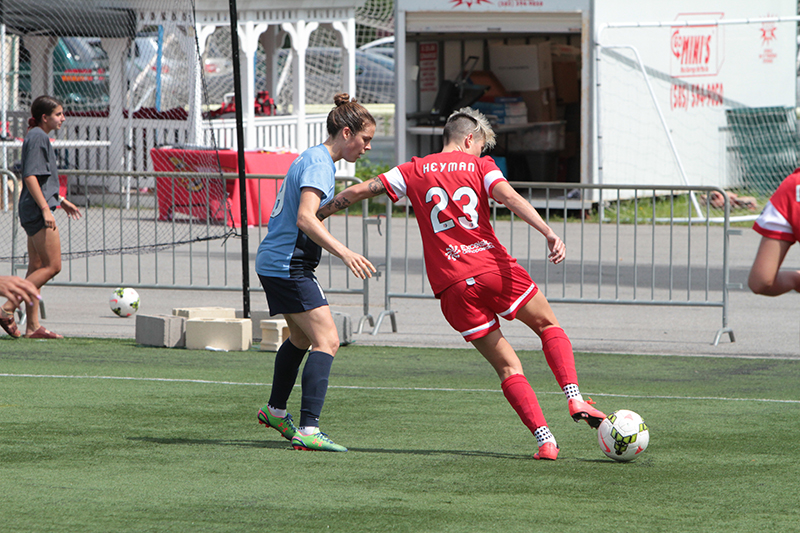 ROCHESTER, N.Y. — The Western New York Flash and Sky Blue FC ended their first meeting of the season with a 3-3 draw after a match filled with surprising twists and turns throughout.

U.S. women’s national team players Christie Rampone (Sky Blue) — who scored the equalizer — Kelley O’Hara (Sky Blue) and Whitney Engen (Flash) all rejoined and started for their respective squads. U.S. forward Sydney Leroux missed the match and is expected to miss the rest of the season for the Flash after she gets ankle surgery.

“I’m just excited to be back on the soccer field,” O’Hara said about getting back to the NWSL. “I’ve been looking forward to getting back with the club and playing the rest of the season with them.”

Rampone agreed: “It was an amazing experience at the World Cup and then how we came home and had such a warm welcoming from the West Coast to the East Coast. Hopefully the momentum swings into the league,”

Australian forward Michelle Heyman made her debut for the Flash – her first time playing professionally in the United States – and instantly made a strong impact. Her presence up front tested the Sky Blue defensive line and goalkeeper Brittany Cameron early on. Heyman was eager and hungry for a goal, which she achieved in the 50th minute when she easily finished a rebound from Samantha Mewis’ initial shot off the crossbar.

When asked about Heyman’s debut performance, Flash head coach Aaran Lines said, “I thought Michelle was brilliant. I thought she came in there and added another dimension to our game.”

The first half was dominated almost entirely by the Flash as the team portrayed solid play on all fronts. That is, until Sky Blue netted its first goal and caused some hiccups for the Flash. With a boost in confidence, Sky Blue picked up offensive play as they looked for the equalizer before the end of the first half. Samantha Kerr presented multiple threats down the right flank with explosive runs that challenged the Flash defense.

Jasmyne Spencer set the pace of the match by putting the Flash on the board early in the 2nd minute. After a scramble in the box off a corner kick, Spencer got a foot on the ball and drilled the ball past Cameron.

Heyman hit a powerful header on frame in the 15th minute, but Cameron was there to make a beautiful diving save to knock the ball up and it was tipped off the crossbar. Less then 10 minutes later, defender Jaelene Hinkle exploded through the midfield and netted her first professional goal with a low shot past Cameron to give the Flash a 2-0 lead.

In the 29th minute, Sky Blue scored its first goal of the match when O’Hara chipped a beautiful ball into the box where Nadia Nadim was wide opened and easily finished, stunning the Flash defensive line and catching them off guard.

Like the first half, the Flash started out quick and dominant after the restart, creating a series of strong offensive opportunities, one of which was Heyman’s goal. Within 10 minutes, a series of defensive blunders evened out the scoreboard as Sky Blue netted two goals within less than five minutes.

In the 60th minute, Katy Freels took a shot from 12 yards out, the ball was deflected off of Brittany Taylor and landed in the back of the net. Shortly after, in the 64th minute, Rampone netted the equalizer off of a corner kick.

In the 76th minute, Caitlin Foord served a great ball into Freels, but Flash goalkeeper Chantel Jones was there to make the diving save.

It was back and forth play throughout the rest of the match, and though there were some close calls, both teams were unable to capitalize on any offensive opportunities, ending the match in a draw.

“It’s disappointing when you’re 3-1 up at home,” Lines said. “Scoring three goals in your own backyard should be enough to take three points away. Disappointing that we conceded those three but we’ll get back to work and make it better.”

Sky Blue remains at the bottom of the NWSL table with 11 pts. The Flash now have 15 pts., but are still out of playoff positioning, in fifth place.