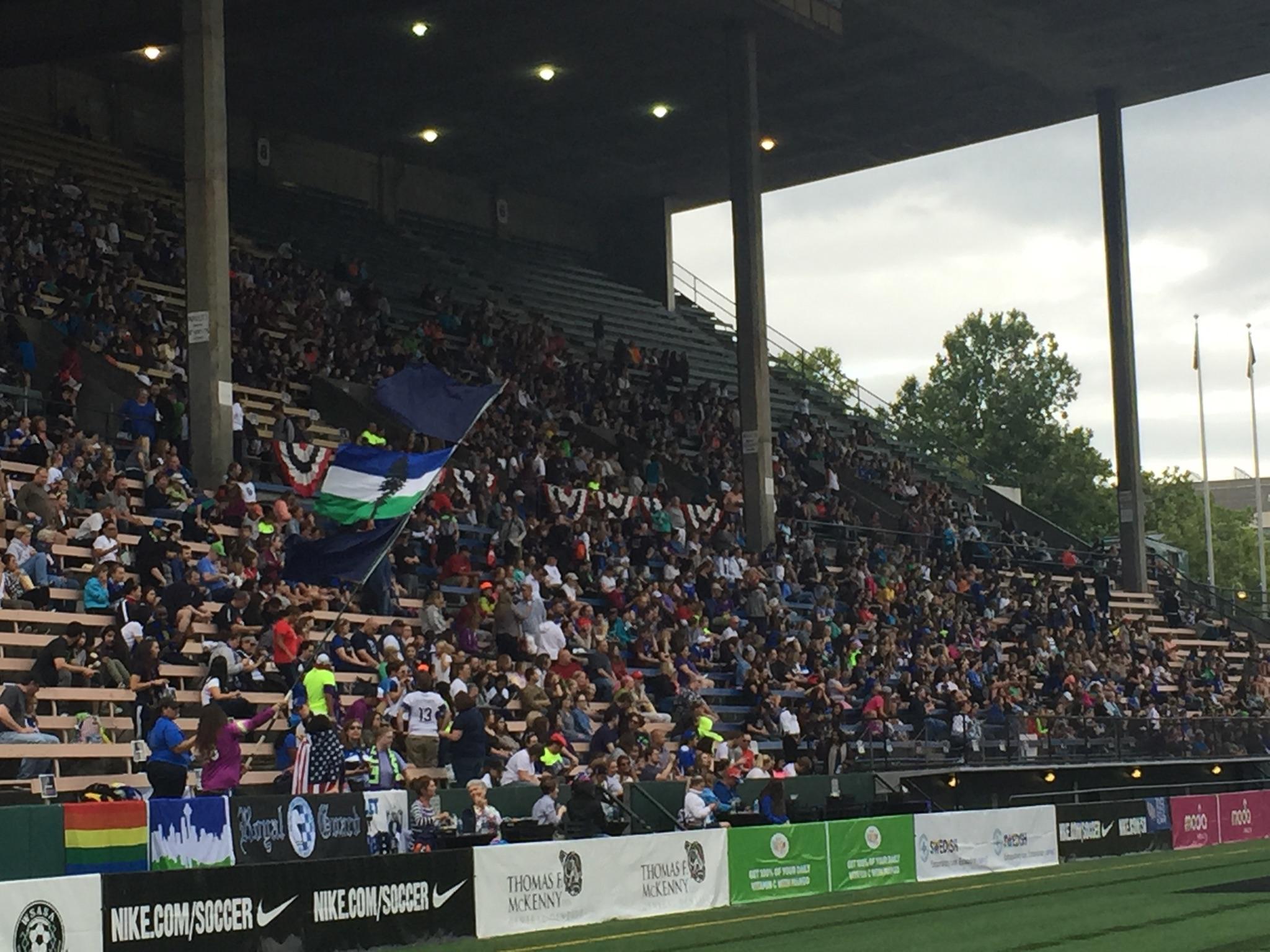 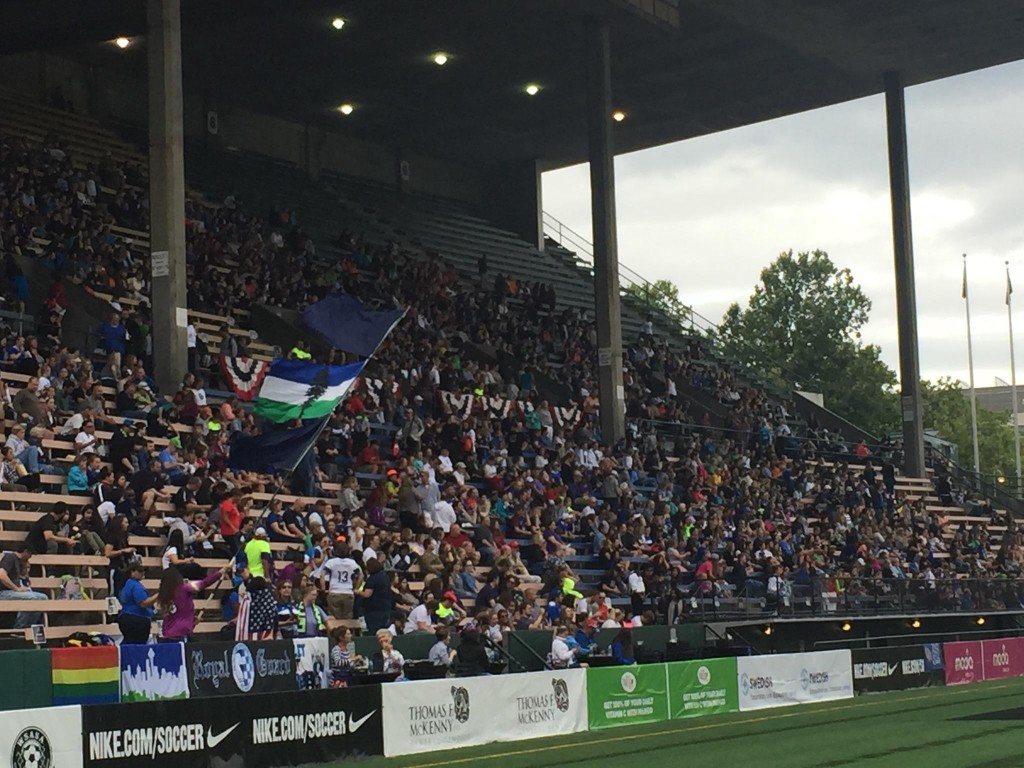 The World Cup bump has arrived. Following a weekend that saw the Dash smash their single-match attendance record and the Reign and Sky Blue set season highs, more big attendance numbers are anticipated this weekend. The Washington Spirit and Chicago Red Stars both announced sellouts for Saturday’s matches four days ahead of kickoff. For the first time, a relatively healthy women’s professional soccer league will have an opportunity to fully capitalize on this phenomenon.

“The numbers we saw in Seattle and Houston specifically were fantastic” NWSL commissioner Jeff Plush said. “But it needs to be replicated. That’s the important thing. We spent a lot of time talking about that this week. The opportunity to turn it from a balance to a real lift for the sport is here. The signs are very encouraging that this is a deeper and more impactful opportunity than just a one-off.”

Sky Blue FC drew 3,014 to Yurcak Field on Saturday, their highest attendance of the season by far and the second best in the NWSL iteration of the club. “Today is what we need to have to keep this alive (and) to continue to grow this game in New Jersey,” Sky Blue FC president and general manager Tony Novo said.

Sky Blue have four more home matches lef,t including one each against the Thorns and FC Kansas City, who have potential to be bigger draws. “There are people already buying for the next couple of games so they realize that there’s internationals on every other team that’s coming to visit us.”

The Breakers are also experiencing a surge in advance ticket sales. With three home matches remaining, not including this weekend, the team has said that limited seats remain for all three matches.

As for Sky Blue, last week represented a unique opportunity for the club that sits last in the league both in the standings and at the gate. Friday, Sky Blue got to latch on to a small part of the ticker-tape parade honoring the World Cup winning United States team and Major League Soccer commissioner Don Garber promoted Saturday’s game during brief comments in front of City Hall.

“Just riding the wave of the World Cup victory and the parade,” Novo said. 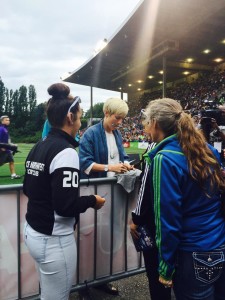 One of the questions about the sudden rise in NWSL interest and attendance is whether it was a wave that gathered momentum during the World Cup or whether it sprung to life suddenly during Carli Lloyd’s 16 minutes that transcended women’s soccer.

“Certainly it was a great 16 minutes,” Plush said. “We saw growth coming before the U.S. women did what they did, but then that accomplishment certainly accelerated things.”

In Chicago, the Red Stars have reported that the time from the World Cup final through this Saturday’s match will be the most robust ticket selling fortnight of the year. The club was also inundated with local media requests, many of which had to be turned down initially because of the national team’s whirlwind of travel and victory celebrations.

“We had more media inquiries in the two days after the World Cup victory than we’ve ever had,” Red Stars general manager Alyse LaHue said. “Once our U.S. players arrive back in market I think we’ll find we get a second wave of media, so it may turn into a blessing for us.”

The World Cup bump is likely to play itself out through the rest of the summer. Even the Thorns, the one team no one ever worries about, reported last week that next Wednesday’s home game against the Reign could sell out Providence Park, which holds about 21,000 fans. But what happens when the 2015 season ends? The NWSL offseason is a long, sometimes dark path the clubs must navigate.

The Red Stars are among clubs taking the lead in this regard. The launch of their Academy, where local players can learn from the Red Stars players, has helped give more of them incentive to remain in the area all year.

“Little by little we’ve been able to keep more players around for marketing and community visibility,” LaHue said.

The Red Stars will make 2016 season tickets available beginning August 1. The Breakers have said early August for the start of their 2016 availability. Plush said most teams have targeted a similar timeframe to begin selling for next year. How well they are able to bridge the offseason will go a long way toward telling he tale of just how much long-term impact the current surge will have.

“One of the complicated barriers for any league is when you have to go a little dark for a little while and you’re no longer offering your product to people on a live basis,” Plush said. “That will be one of our challenges to think how we can stay relevant and visible when we’re not playing matches. But for the second half of the season we still have over 40 competitive matches in the league that is so tightly contested. I think the product itself will help to keep us very top of mind.”

Plush also stressed good customer service and making sure any fans new to NWSL enjoy positive experiences once they pass through the turnstiles. “At the end of the day the most important thing we can do to take advantage of this is when these new fans come in our building for the first time, to give them a tremendous experience.”

And if it were up to Plush, 2016 season tickets would already be up for offer.

Plush said the league has been in contact with the clubs but does not have direct say over how they operate in terms of ticket sales.

The long-awaited bump has arrived. Now it is time for NWSL and its clubs to take advantage.

Champs coming around: Two weeks ago, FC Kansas City were desperate to get their national team players back. But the lightbulb went off in a 3-0 win over the Spirit and they followed it up by beating the Breakers, 3-2 in a hard-fought contest last Thursday. That brings the Blues to .500 (5-5-2) with a four-point cushion on the inside of the playoff bubble. The caveat is that they have played more games than anyone in the league besides Sky Blue, but with Lauren Holiday and Amy Rodriguez on the way back to bolster the offense, they should be just fine the rest of the way. The rest of NWSL may rue allowing FCKC to survive the World Cup portion of the season.

Flash set-piece defending: The Flash have already come a long way since their disastrous, season-opening two games in the Pacific Northwest. But their set-piece defending in Saturday’s 4-2 loss in Seattle was nothing short of abysmal. Ahead for coach Aaran Lines is an interesting personnel decision. Who will be the center back pairing when Whitney Engen returns? The Brittany Taylor-Abby Dahlkemper pairing has been okay and most believe Dahlkemper is a future center back for the U.S. national team. Taylor has played right back before, but her best season was 2013 in the middle, and her one start at right back on opening day was by far the Flash’s worst defensive performance of the season. Also, Engen nursed an injury in early spring and did not play a second in the World Cup, so she has not played in a competitive match since May 2. Lines could elect to work her in slowly.

Thorns ready to change: The Thorns did not fare so well during the World Cup. Their 1-0 loss at Sky Blue on Saturday dropped them to 1-4-4 since starting the season with two straight wins. The bottom line is they missed their World Cup players. The Allie Long-Mana Shim combination fizzled in their absence and Ayo Anomma scored only one goal, and as Paul Riley said the team just lacked “dynamics” up front. But what happens now? How will Alex Morgan, Christine Sinclair, and Jodie Taylor interact up top? Will Riley switch to a four-back to accommodate Steph Catley and Clare Polkinghorne? And despite Nadine Angerer’s excellent World Cup, it is fair to speculate as to whether Michelle Betos has earned the right to keep her starting goalkeeper spot—at least in the short term. One way or another, the Thorns will not be boring. They never have been.

— Ashlyn Harris and Ali Krieger will be at the SoccerPlex on Saturday but will not dress to play for the Spirit. Megan Rapinoe and Hope Solo also reportedly won’t play in that match for Seattle Reign FC.

— Commissioner Jeff Plush was steadfast that all decisions about which players do and don’t play are strictly between the players and their NWSL coaches.

— Shea Groom broke her right foot in a collision with Breakers goalkeeper Jami Kranich. The estimated recovery time for Groom is four to six weeks meaning she could still play again this season. Minutes earlier Groom scored the game-winning goal and was later named Player of the Week.

— Sky Blue coach Jim Gabarra feels his team is playing better and believes there remains a path for the club to sneak into the playoffs. They are seven points behind and have eight matches to play.

— Abby Wambach told Dan Patrick that she is still soaking in the World Cup win and is not in the proper mental state to make any decisions on her soccer future. For the moment there have been no indications she is close to joining Seattle Reign FC who own her NWSL rights.

— The Red Stars say they are continuing to look at venue alternatives and at this time are not prepared to comment on where they will play in 2016. The club has also expressed frustration about the league’s TV schedule. The Red Stars will host the Dash at Toyota Park on September 6 and were hoping the larger venue would attract an FS1 telecast. Said LaHue: “One of the reasons we booked a late season game there was because we knew it would increase our odds of being shown as part of the league’s TV package. Without explanation that didn’t happen.” All of the nationally televised matches will be in Houston or Portland.

— The league is in various levels of discussion with more than a dozen groups interested in starting franchises. They hope to have some sort of timetable announced in the next 30 days. A new team in 2016 has not been ruled out.

— I’m not privy to the finer details of how the Houston Dash marketed last Sunday’s match, but I do know that there are no individual guarantees when you purchase tickets to a team sporting event. So I get why anyone who went to see Carli Lloyd et al was disappointed. At the same time the national team crisscrossed Canada twice while playing seven matches in 28 days and then went to celebrate in Los Angeles and New York City before Lloyd, Megan Klingenberg, and Morgan Brian hightailed it to Houston to make appearances in front of a record Dash crowd. It would be a shame if anyone who was there won’t go back. After all, Lloyd said they were going to win the NWSL Championship.

— The Spirit are another story. But I’ll have more on this next week.

— Check out Kealia Ohai’s assist against the Red Stars on Sunday. She was like a three-point shooter that got her driving lane blocked so she took a step back before firing a perfect cross to Tiffany McCarty.