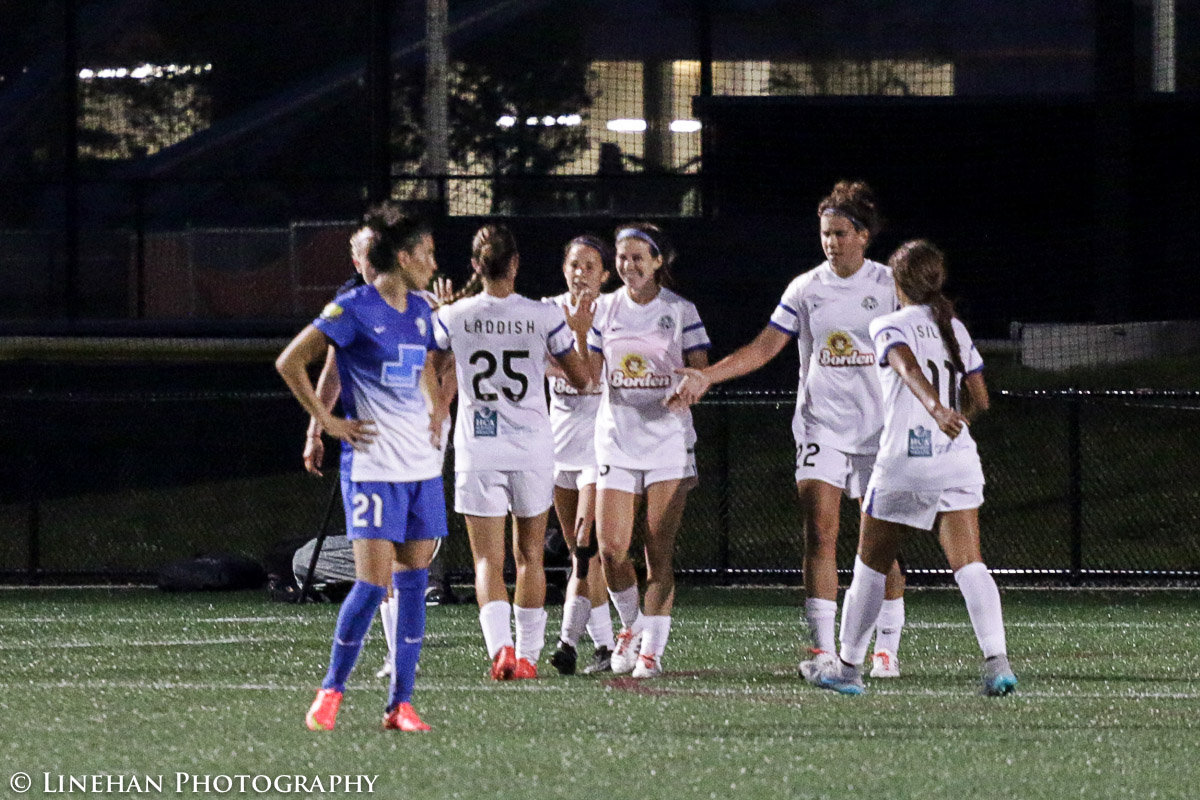 BOSTON — Defending NWSL champion FC Kansas City appears to fully recovered from whatever was ailing it for the last couple of months. After scoring just nine goals in its first 10 matches (and winning just three), the Blues scored three times on Thursday for the second consecutive match and made it two wins in a row. Shea Groom’s 78th-minute goal the winner in a big 3-2 road victory over Boston before 2,525 at Soldiers Field Stadium in the league’s first game following the Women’s World Cup.

FC Kansas City (5-5-2) – while it has played the most games in the league (12) – now moves into third, ahead of the Washington Spirit on goal differential, and only one point behind league leaders Chicago Red Stars and Seattle Reign FC. And with next week’s game moved, the national team cavalry in the form of Lauren Holiday, Amy Rodriguez, Heather O’Reilly and Becky Sauerbrunn should all be available by the time they take the field again.

Thursday brought an extremely open and entertaining contest, in stark contrast to Kansas City’s last trip to Boston on May 30, a 1-0 Breakers win which the hosts dominated on the stat sheet. It took only 27 seconds for Kansas City to score on Thursday, with Frances Silva finding Groom, whose cross eluded Boston goalkeeper Jami Kranich, allowing Erika Tymrak – the 2013 NWSL Rookie of the Year – to score her first goal of 2015 from short range.

“We were almost forced to play a little bit more open because of how they came after us,” Kansas City coach Vlatko Andonovski said. “Obviously we came out with two forwards (Groom and Caroline Kastor, making her first professional start), so we kind of made it happen like that, too. We’re known as a very solid defensive team, we have more shutouts than any other team in the league, so it is what it is, if it’s an open game, we’re going to compete and we’re not going to back off.”

[MORE: Fell in love with the U.S. at the World Cup? Give NWSL a try] 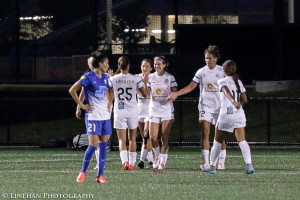 Boston (3-6-2) scored just two minutes later (at the 2:05 mark to be exact) when Kansas City goalkeeper Katelyn Rowland kept out a Julie King header off a corner, but Morgan Marlborough was able to bundle it home. The Breakers continued to put the pressure on in the first 20 minutes, with Rowland coming up big with a kick save to deny Mollie Pathman from 12 yards out in the 13th minute. Boston out-shot Kansas City 18-11 and forced six saves out of Rowland in the first half, most coming in that opening flurry.

But the Blues got their bearings, and it was the same Silva-Groom-Tymrak combination that put them in front just before halftime, Groom doing a highwire act to stay in bounds on the endline and finally cutting it back to Tymrak from eight yards out for her first-half brace.

Kansas City played a 4-4-2 with Tymrak out wide left and not in the center as she has been for much of this season, especially since Holiday went to national team duty. The move seemed to help Tymrak.

“I’ll play wherever coach wants me to play, but I love playing out wide,” Tymrak said. “I feel like I have a lot more space, but like I said, it’s Vlatko’s world and I’m just living in it.”

In the 60th minute, a rare mistake from Leigh Ann Robinson on a clearance went directly to the left foot of Kristie Mewis from 15 yards out, and that was the worst possible place for Kansas City as Mewis – who had another solid match – crushed it into the corner for her fourth goal of the season (and second against her former team).

The game continued to be end-to-end, Kranich denying Groom in the 65th minute before Boston substitute Riley Houle, just seconds into her first professional appearance, got a clear breakaway in the 71st minute and rounded Rowland, but took a little too much time, allowing former Breaker Amy LePeilbet to poke it away.

The winner came in the 78th minute on a beautifully worked team goal by the visitors. Sarah Hagen – who was very effective as a sub – flicked the ball to Jen Buczkowski, who slid a through ball to Groom. Groom looked like she might have held the ball too long, but beat Kranich at the near post for her fourth goal of the season to go with her two assists. Unfortunately, just a minute later, Groom collided with Kranich on a through ball and left the field on crutches with a right ankle injury.

The loss was a devastating blow to Boston’s playoff hopes, with the Breakers at 3-6-2 and now facing a home-and-home with what should be a full-strength Chicago in two weeks. However, although they will only get Alyssa Naeher back from the United States’ post-World Cup celebrations, they should have Kyah Simon and Rafinha in the lineup by then as well.

“It sucks to drop games at home,” Boston coach Tom Durkin said. “I’m disappointed and the girls are disappointed, but we just have to find a way to close these games out. The team’s not playing bad. Coaching this team is like going to sleep on a cold New England night without a blanket. If I cover my head, my feet are cold and if I cover my feet, my head is cold. I need to get a bigger blanket and I hope that’s coming in the form of getting our whole 20-man roster soon.”

Klingenberg: 2015 team pioneering in its own way
United States women return to top of world rankings