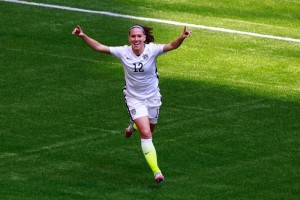 Lauren Holiday used the United States national team’s World Cup championship celebration event on Tuesday in Los Angeles as the time and place to announce her retirement from international soccer.

“I know this is where I was supposed to be for so many years, and I know that I gave my all to soccer, to the sport, to this team,” she told SI’s Grant Wahl. “And I’m excited for a new chapter of my life. I feel like this team isn’t my identity, it’s my choice. I think there’s power in making a choice. I chose this team for 10 years, and now I’m going to choose my family.”

Holiday’s retirement had been long speculated, but things moved to a fever pitch following the team’s victory celebration on Monday in Vancouver.  U.S. coach Jill Ellis handed each player a new jersey with the third World Cup star above the crest.  As Holiday approached, Ellis could be heard saying, “What a sendoff for you, my friend.”

Holiday, 27, scored in Sunday’ final, which will now stand as her last tournament appearance for the United States. The U.S. defeated Japan, 5-2 to secure a third World Cup title and first since 1999. Holiday’s goal proved to be the eventual game-winner.

Wahl further reported that Holiday will finish the NWSL season with FC Kansas City.  The national team will play 10 games this fall to celebrate the World Cup win.  The two announced matches are August 16 in Pittsburgh and August 19 in Chattanooga.  There was no immediate word about how many, if any, of those matches Holiday will be available for.

Holiday is a two-time Olympic champion in addition to the World Cup title she helped the team win on Sunday. She is also the 2013 NWSL MVP and the 2014 NWSL Championship MVP, helping FC Kansas City win the title. Holiday currently has 24 goals in 130 career appearances for the United States over 10 years with the team.

Holiday, then playing under her maiden name, Lauren Cheney, was named to the 2011 World Cup all-tournament team after a breakout performance. She was removed at halftime from the 2011 final against Japan — which the U.S. lost in penalty kicks — due to injury.

She is married to NBA point guard Jrue Holiday, who plays for the New Orleans Pelicans. The two met while attending school together at UCLA.