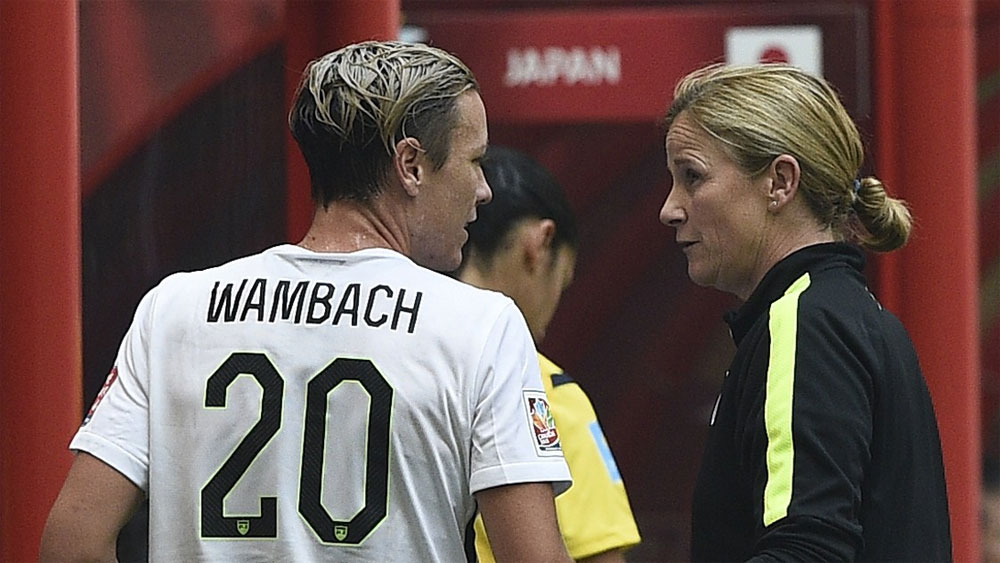 VANCOUVER, British Columbia – So, what now?

It’s a blunt question, to be fair, but it was the forward-looking inquiry for the United States women’s national team after the last pieces of golden confetti fell onto BC Place’s artificial turf, amid thick haze that blew into the partially-roofed stadium from wildfires to the east.

The U.S. had just won its first Women’s World Cup in 16 years, demolishing Japan, 5-2 in the highest-scoring final in history.

But the Americans are also three-time defending Olympic champions, and the Rio Olympics start in just over a year. The U.S. was also the oldest team of 24 teams at this World Cup with an average age of over 29 years old.

Longtime captain Christie Rampone turned 40 years old during the tournament. She won both the 1999 and 2015 World Cups, the only player on the current team to win two titles.

“It’s been amazing,” Rampone said. “To be put in at the end of the game is truly an honor and I thank the coaching staff for that. It just brings it full-circle for me. Starting with a win and ending with a win, it doesn’t get better than that.”

But Rampone played only 14 minutes in this World Cup, losing her spot as starting center back – initially due to injury – to 23-year-old Julie Johnston. This was Rampone’s last World Cup, but will she try to play at the 2016 Olympics? Will she retire at year’s end?

“We’ll see how it goes,” she told The Equalizer on Sunday.

Rampone is not alone in the dilemma. Midfielder Shannon Boxx turned 38 years old in June; she played only 16 minutes at this World Cup, all against Nigeria.

And the big question that everyone wants to know: Will Abby Wambach retire? Wambach is the most decorated goal-scorer in the history of men’s or women’s international soccer. Her lone tally of the tournament against Nigeria boosted her haul to 183 career goals.

In the moments following the match on Sunday, Wambach was pointed about enjoying the night before thinking about or discussing her future. On Monday morning, she told Fox Sports that she needs time to think about her future.

“Right now, I’m gonna have to definitely re-evaluate in the coming weeks, the coming months,” Wambach said. “We’ve got the 10-game celebration tour that we’re gonna have a lot of fun with and we’ve got to qualify come January/February of next year for the Olympics. So, we’ll see how my body feels, we’ll see what’s going on with some of the other players on the team. It’s an 18-[player] squad, so it’s a harder squad to make. And I just want to be happy and playing really good soccer.”

Wambach’s mom, Judy, said Monday that she was “over the moon” for her daughter, but she isn’t sure what the 35-year-old forward will do.

“She has so much fun doing this, I would hope that she would [continue],” Judy Wambach said. “But she has always said they have to want her to, so it all depends on the circumstances at the time, if she’s healthy and they want her. There’s a lot of young, beautifully talented women behind her now that can take the reins and be successful.”

These roster questions are the latest that stare down U.S. coach Jill Ellis, who faced hefty criticism for the team’s uninspiring play in the first four matches of the World Cup before being anointed for her tactical changes from the quarterfinal stage onward (some changes were made by force due to suspension, but it’s irrefutable that Ellis nailed the United States’ tactics in the final two games).

[LAULETTA: Wambach gets the World Cup title she has so long desired]

Ellis said on Monday that she hasn’t yet discussed the future with Wambach or some of the other veterans, but the English-born U.S. boss will have to trim her 23-player World Cup roster to 18 players for the Olympics. The last player cut from this United States World Cup team was Crystal Dunn, who has largely played fullback for the national team but has, since being inspired by her publicly perceived snubbing from this U.S. squad, gone on a tear in the National Women’s Soccer League, scoring a league-leading seven goals in 11 matches for the Washington Spirit.

“Crystal was on the cusp and it was a really hard decision, but I know we’ve got a lot of quality and there’s some players that maybe I haven’t seen,” Ellis said. “I’ll continue to look at the NWSL games and look at the youth teams and see what’s out there.”

A usually stoic Ellis was visibly ecstatic – to use her word – on Sunday night and Monday morning. This World Cup victory was about the here and now, but it was also about sending the veterans out – with “out” at least being in terms of their World Cup careers – on a high note.

“It was one of the priorities for me,” Ellis said. “As much as you want this for your country and you want this for these players, those women have given so much and to send them off with a World Cup, I get emotional thinking about it, because that was a big, big part. I want their legacy – they’ve done so much for the game and now to leave their mark and people talk about them, and this generation now has their next set of heroes.”

That appreciation for the outgoing generation is a longstanding part of the U.S. national team’s culture. Hat-trick hero Carli Lloyd handed over the captain’s armband when Wambach checked into the final in the 79th minute, and Wambach handed it over to Rampone after the game. Rampone, in turn, made Wambach wait with her at the back of the procession for the gold medals, so that the two multi-generational legends could lift the World Cup trophy together.

That sort of togetherness isn’t lost on the new stars of the team, including the player Wambach has most directly influenced, forward Alex Morgan.

“Me and Abby spent a couple minutes sitting down in the locker room as everyone was celebrating,” Morgan said. “It was a pretty special moment for me, knowing that – I actually asked her if it was the last time we were going to play together ever on the field together, starting to tear up, and she said, ‘no, we have a couple more months together, probably.’ So, that made me smile a little bit.

“Abby, like I said before the World Cup final, she’s the glue to this team and I love her so much. She’s such a great friend of mine and it’s not only her, though. It’s honestly some of the other players like Christie Rampone, who has worked so hard and is Captain America to us. So, it’s some of those players that we look up to, still to this day.”

Wambach started three of the seven games at this World Cup but played only 25 combined minutes in the United States’ final three matches. She said last week that her time on the bench this tournament has taken years off her life, and she now knows how stressful it is for her parents to have to watch matches from the stands.

“I said it to her: ‘Now you know what it’s like to sit there patiently,” Judy Wambach said Monday.

Now the world waits patiently to see what Wambach and some of her teammates will do.