World Cup final tactics: Will US get better of Japan? 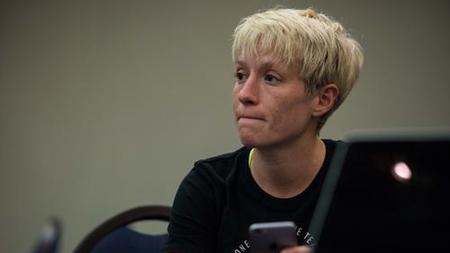 VANCOUVER, British Columbia — World Cup final day has finally arrived. The United States and Japan will do battle in the final for the second straight World Cup and third straight major final including the 2012 Olympics. So how will this one play out?

The United States will win if…

If the United States can keep their defensive shape they stand an excellent chance of posting another shutout and winning their third World Cup. Easier said than done though against a Japan team that has more patience in possession than anyone in the world and that can build up an attack on both flanks. England disrupted the Japanese with a medium high pressure that forced the Nadeshiko into more long balls than they are accustomed to (one of them created their goal) and more turnovers than is the norm. If Morgan Brian and Lauren Holiday play together on top of the back line they will be the most important players for the United States. It will be up to them to react to developments ahead of them and win possession back for the U.S. Japan will be more patient than Germany was but Brian and Holiday will be the key to keeping enough numbers and shape behind the ball to make it an almost impenetrable setup.

Japan will win if…

Japan’s specialty is running teams ragged with possession, something that is unlikely to happen against the U.S. team of the last two matches. But it does not mean there is no way for Norio Sasaki’s side to solve the U.S. defense that has not allowed a goal in 513 minutes. All four of Japan’s defenders are excellent passers of the ball, and all four will need to be on their game to avoid the sort of turnovers that can get the line stretched out of shape. But if they can effectively utilize their diversity by directing unpredictable attacks up the middle and down both flanks it will force the U.S. to chase more than they have since the early part of the Australia match. The right flank will be a key battle ground for the world champions. Right back Saori Ariyoshi and midfielder Nahimi Kawasumi, with help from Aya Miyama, can dominate a match. The U.S. stations Megan Rapinoe on the same wing and she will be looking to keep Ariyoshi pinned back. Whoever generates more attack on that side could be the one lifting the trophy Sunday evening.

Lydia Williams offered her thoughts on the match

Williams was the starting goalkeeper for Australia, the only side to play the United States and Japan at this World Cup.

“Honestly I think the possession base that Japan played against us really tired us out. I don’t know if we had the best game anyway, but if it’s as hot as it’s meant to be and they continue that without any break I think they might dampen the U.S.A a little bit in their attack. But if they start to force it a little bit like they have been with England. U.S. has powerful enough mindset and engines to get on top. So I think it’s just going to depend on the type of the game. Either team can take it. But it depends on how both teams play.

Rapinoe on the U.S, pressing Japan

“It is kind of a crucial balance,” Megan Rapinoe said. “You can’ just chase with your head cut off. They’re way too good for that. They’re also too good to just sit off and not go on them. We have to know that sometimes they’re going to get out and we have to defend off shape and we can’t just be flying at them. But when we can recognize those opportunities and triggers for us to press to go with everything and we’re good enough defensively to trap them and kind of disrupt that. But it is a balance. It’s definitely a tactical game of pressing and then defending off shape at times as well.”

For Japan, approach to game, life is team-first
The Rock: USWNT ’23 of the biggest badasses’