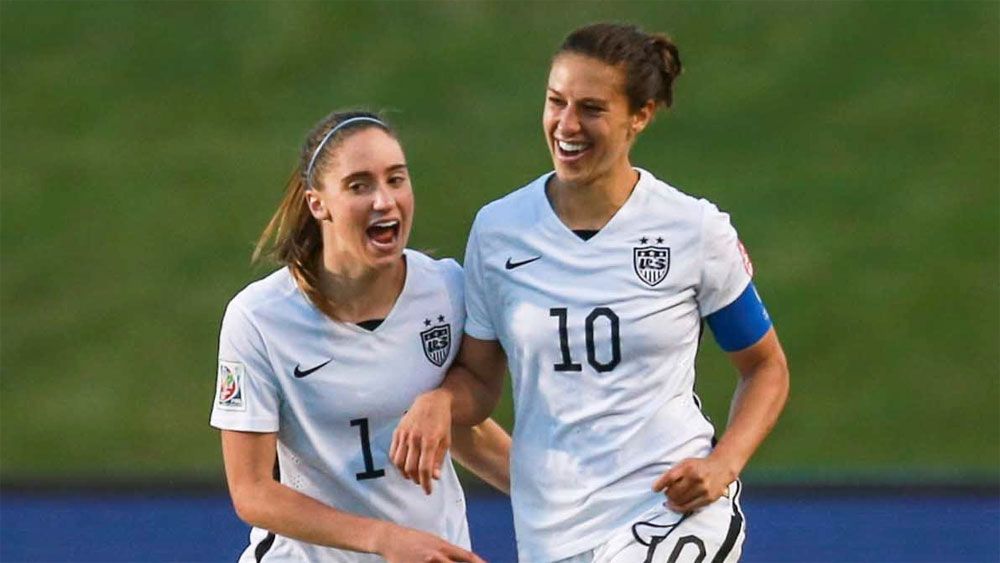 Order has quickly been restored to a world where the U.S. midfielder is her world-class self once again after some early tournament struggles in a more constrained role. Re-writing this team’s Women’s World Cup script is been equal parts main character and supporting cast.

Lloyd has been named by FIFA as the player of the match for the United States’ past three games, all single-elimination knockout matches. She scored in all three matches – twice the game-winner – and her game has evolved from self-critically below her own high standards to MVP-like in a matter of a week. She is a finalist for the Golden Ball, given to the tournament’s best player, and likely the favorite for the award should the U.S. beat Japan on Sunday in the final.

That Lloyd is clutch in big moments is nothing new. She scored the past two gold-medal winning goals for the three-time defending Olympic champion United States.

She’s been asked so much about how and why she is so good on the biggest of stages that the question on Tuesday, after the U.S. beat Germany in the semifinal, drew a light chuckle and a smile from both player and the crowd of reporters.

“Well, I’ve just been training my butt off for the last 12 years,” she said. “These are the moments that I live for,” said Lloyd, a common and clearly accurate refrain.

Llloyd is one of the United States’ all-time best midfielders and the most productive scorer from the position; Tuesday’s goal was her 66th internationally.

“This is kind of where I roll my sleeves up and say to myself, ‘I have to step up,’” Lloyd said postgame. “I think that with Jill [Ellis, U.S. coach] and the coaching staff kind of giving me the flexibility to express myself out on the field, I just needed to deliver in any way possible. Tonight was stepping up for the PK. Mentally as well, I’ve just kind of been trained to be a fierce competitor, live for challenges and never quit, no matter what the scenario is.”

Ellis changed the team’s system of play – first by force due to suspensions for the quartefinal against China, and then by choice on Tuesday, having seen it work successfully – to free up Lloyd into a more attack-minded role

Megan Rapinoe described Lloyd figuratively as “a hunter,” a fitting word for a player who seems to always find the goal.

But behind Lloyd – literally on the field and figuratively in the spotlight – now sits 22-year-old Morgan Brian. She has liberated Lloyd, and also on Tuesday Brian did the same for fellow central midfielder Lauren Holiday.

Brian looked composed beyond her years as a defensive midfielder in the quarterfinal and semifinal. She sat in, clogged passing channels, won the ball and distributed to start the attack, all of which are not necessarily known to be her bread and butter after a standout career at the University of Virginia as an attacking midfielder.

It’s an ironic word choice, pun intended or not. Ellis went with a double pivot – “two number sixes” as she calls it – slotting Brian and Holiday behind Lloyd, who was allowed to freely foray toward goal and at times play as an out-and-out forward alongside Alex Morgan.

“I think she’s come in and she has, she’s kept possession for us, she’s stabilized us at times, allowing Lauren to get forward,” Ellis said of Brian. “It’s not a natural role for her, but she makes it look natural.

“I think she’s been critical,” Ellis added. “I thought she played tremendous today.”

Ellis’ tactics proved perfect on the night, but they were almost derailed 30 minutes into the game when Brian and Germany striker Alexandra Popp collided heads, causing Popp’s head to bleed and eventually be bandaged.

[LAULETTA: Rampone, other veterans met with Ellis at midway point]

Brian stayed on the ground much longer than Popp, lying face-up, looking a bit deliriously at the blue roof covering the 39-year-old Olympic Stadium. Both players re-entered the match almost immediately after going to the sidelines and following brief on-field check-ups. Brian said after the game that she was fine.

On Friday, Ellis said Brian was cleared to play.

FIFA states among its list of “visible clues of suspected concussion”: “Lying motionless on ground/ Slow to get up,” “Grabbing/Clutching of head,” and “Dazed, blank or vacant look.” Any suspicion of a concussion requires a player to be “immediately removed from play,” FIFA writes in all capital letters in its concussion recognition tool.

Dr. Beth McQuiston, a board-certified neurologist and medical director for Abbott’s Diagnostics, calls a concussion a “silent injury,” noting that players are more susceptible to a second concussion within the first 10 days of sustaining one.

Brian and Popp did not suffer concussions, according to their teams.

“I have absolute faith and trust in our medical team to do the right thing,” Ellis said after Tuesday’s semifinal. “They [team Dr. Bojan Zoric] assessed [Brian] on the field, they assessed her at halftime. They go through a strict regimen of protocols that’s set forth by U.S. Soccer. She was fine, no symptoms. But no, I think I would never question our doctors. I think they do the right thing.”

Germany coach Silvia Neid said Popp, who was also briefly examined by Germany’s staff, told her and team doctors that she felt good.

Popp had her head wrapped and was still seen bleeding after the game once she removed the wrap.

Brian carried on seamlessly with her yeoman’s work, serving as a stopgap that held Germany to just one shot on goal (and a mis-hit cross at that). Germany entered the match as tournament leaders in goals (20) and shots (134), but produced nothing more than speculative efforts from distance. Celia Sasic even became the first German to miss a penalty kick at a Women’s World Cup, her attempt being the 13th in the team’s tournament history.

The U.S. defense remains historically great, having not allowed a goal in 513 minutes. That unit is particularly crucial with the United States’ forward line accounting for only two of the team’s nine goals at this World Cup.

It is the midfield that has changed the course of this United States team at this World Cup, which only 10 days ago looked ominous. If Lloyd is the hunter, Brian is the spotter, surveying the land to scope out any danger. Like USA super-fan Tom Hanks in Saving Private Ryan, Lloyd is the protagonist to this mid-tournament evolution of the United States national team. But the Oscar goes to Brian for best supporting actress. Like any great movie, both are essential to the plot.