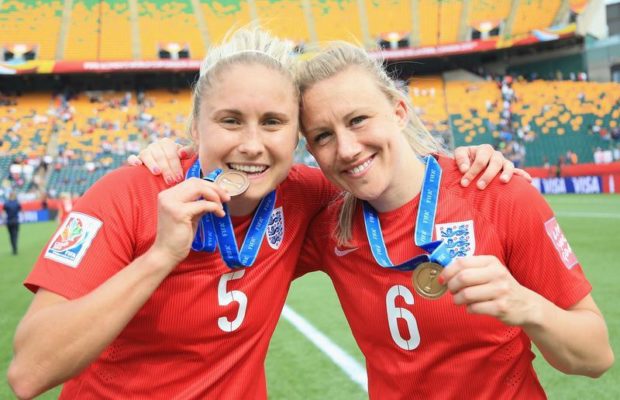 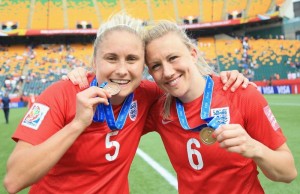 Fara Williams’ penalty in the second extra time period at Commonwealth Stadium in Edmonton lifted England to a 1-0 win over Germany in the 3rd place match at the 2015 Women’s World Cup. The Three Lionesses had already secured their best ever finish at the tournament when they reached the semifinals and by beating Germany finish as the best European side. Laura Bassett, England’s center back whose own goal at the death of the semifinal loss to Japan unleashed a flood of support from all over the world, played the entire 120 minutes at her customary left-center defense spot.

Bassett, who on Friday told FATV she preferred that no one knew her name, was pictured in a tweet from her club side Notts County Ladies gripping her third-place medal.

We know your name , and we say it proudly @laurabassett6 pic.twitter.com/vFEfYGMXIO

The match was played with considerably more emotion than most 3rd place contests but still there were signs that both teams were out of contention to win the World Cup. The lineups were one—Sonja Mittag was among those who did not start—as was the scene near the end of the first extra time when coach Silvia Neid of Germany and Mark Sampson of England chatted between their benches, seemingly exchanging helpless laughter over the quality of the officiating on the day.

Just after the short extra time break, the center official drew the ire of the Germans with her penalty call against Tabea Kemme. Lianne Sanderson had nutmegged her defender to gain position inside the box and Kemme ever so slight twisted her to the pitch. Nadine Angerer spent the next moments angrily pleading her case, but then had to calm herself down to try and defend the penalty.

Unfortunately for Angerer there was no defending Fara Williams’s perfectly placed kick that stood as the only goal on the day. Even after it went in, Angerer still had a few more words to offer before play continued.

The match was Angerer’s final in a World Cup. The former ballon d’Or winner has announced her retirement from soccer at the end of the Portland Thorns season. Angerer won the World Cup for Germany as a backup in 2003 and as the starter in 2007 when she played every minute without conceding a goal. German coach Silvia Neid, the coach in 2007, also bowed out of the World Cup though she will stay on through the Olympics next summer.

Germany ends the World Cup on two straight losses and more than two hours removed from their last goal—Celia Sasic’s 84th minute penalty in the quarterfinal against France. They did not score in the run of play after their Round of 16 win over Sweden.

England had played Germany 20 times prior to Saturday and lost 18 of them with two draws.