Rampone, others met with Ellis at midway point 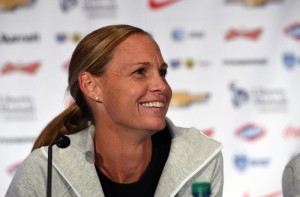 VANCOUVER, British Columbia — The World Cup is a funny thing. It goes by in a flash yet it seems to last forever. Thirty days. Lives change. Legacies are made. Teams make adjustments. And they get better.

The World Cup is long enough, and there is enough travel, that Christie Rampone does not even remember what city she was in when she talked to Jill Ellis about the state of the United States team at the approximate midway point of the tournament.

“Jill actually told us before leaving New Jersey (for the World Cup) that she wanted to meet halfway and kind of recap,” Rampone said Friday during a media session at the team hotel. “See where we’re at, see what the pulse is, how’s the energy, do we need to rest more.”

Rampone said the meetings were informal and individual with different members of the team. “It’s all individual. I had met with her, I’m sure Carli (Lloyd)’s net with her and Abby (Wambach)’s met with her.

“She’s more of a one-one-one than having big groups. She’ll just grab you in the hallway like, ‘alrigt give me five minutes.’ So it’s never really planned which is probably better. It’s more spur of the moment. All the meetings are in her room.”

Rampone stopped short of saying it was the players who asked for more freedom. “Yes and no,” the now 40-year old veteran of five World Cups said.

However and who ever made the call to change things up, if the U.S. beats Japan on Sunday it will likely be remembered as the decision that saved the World Cup. The team went from a somnambulant 4-4-2 setup with Lloyd and Lauren Holiday playing as tandem holding midfielders to a dynamic arrangement with Lloyd sitting off Alex Morgan and Holiday combining with Morgan Brian to press underneath them. Once the formation altered against China, that team never had a chance. Germany was outplayed in the semifinal as well.

“I’m not saying I’m one of the best defensive mids out there, but I played there (in the) 2012 Olympics. And I can do it,” Lloyd said. “But at the same time for me to have more of an impact and try to gett he attack going it’s obviously my natural position.”

Lloyd also spoke of meeting with Ellis during the tournament after she played below her standards during three group matches. “Jill and I have sat down with one and other numerous times and looked at film. She’s always been in my corner. She told me after the group games ‘you’re fine, we’re going to get you going.’ It’s great to have the freedom to be able to create and impact the game.”

[MORE: Lloyd among eight up for Golden Ball]

Asked what she appreciates most about Jill Ellis, Rampone said it is the U.S. coach’s openmindedness to accepting feedback from her assistants as well as her attention to detail about each U.S. opponent.

“I think she embraces their knowledge,” Rampone said of the assistant coaches. “They are constantly meeting and constantly watching video and analyzing the team. I think she’s taken a step back where it’s not always about the U.S. team. She is breaking down the other teams and giving us that feedback. I’ve seen that in the past but just not to the extent that Jill has done.”

Rampone also made reference to the turf which has silently put a beating on those who have done 90 minutes over it throughout the World Cup.

“It was the unexpected playing on turf of how the bodies were going to respond. Do we need more rest? Can we keep pushing? It was more of that communication between players and staff to revisit and then gear up for the knockout phase.