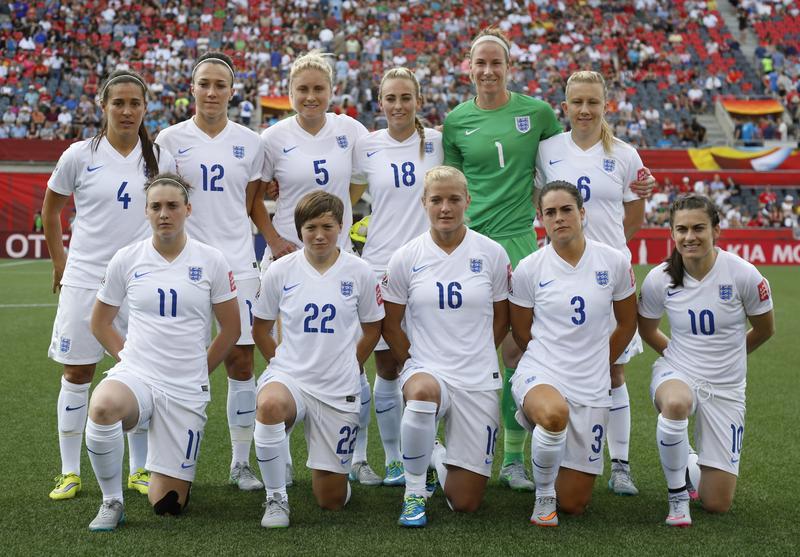 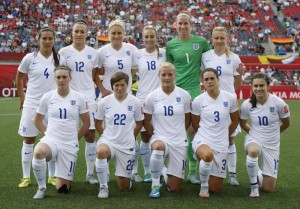 It will take a team effort to England to dethrone the holders. (Getty Images)

Key players:
Japan – Aya Miyama: The attacking central midfielder was everywhere against Australia and has been for much of the tournament.  With help from her flank players Miyama completely bossed the midfield which kept the Matildas chasing for much of what was a scolding afternoon.  If England cannot either slow down Miyama or force her into midfield turnovers it could be a long day spent chasing the ball around for the.

England – Claire Rafferty and Lucy Bronze: The likely starting outside backs for the Lionesses will be charged with trying to contain Japan’s dynamic outside attackers Nahomi Kawasumi from midfield and Aya Sameshima from left back.  Rafferty and Bronze likely need to play the tandem at least to neutral in order to slow the Japanese possession game and allow England to have sufficient numbers when they win the ball for themselves.  Sameshima’s right-sided counterpart, Saori Ariyoshi also likes to play high.

Under the radar key players:
Japan – Saki Kumagai: Even if England can win the flank battle that is only just the start of their battle to attack the world champions.  Kumagai is under the radar only because she does not score and rarely gets forward.  But she is one of the top central defenders in the world and it takes quite a bit to beat her or to goad her out of position.  Her partnership with Azusa Iwashimizu is wonderful and has been they glue to Japan’s unbeaten/untied march through this World Cup.

England – Fara Williams: She will have her hands full trying to contain Miyama which will be next to impossible if Japan’s wide players are allowed to make an impression.  Williams’s other main job will be to set the English attack in motion.  Her passes out of midfield will set the tone for how and with whom the team attempts to break down one of the best defenses in the world.  England will require a smart, measured performance from Williams to keep the playing field level.

Inside the numbers:
8 — That is how many consecutive World Cup matches Japan has played since last losing at the end of the 2011 group stage.  Their record is 7-0-1 which includes the 2011 final against the United States which they won on penalties and goes in the books as a draw.  In 2011 Japan had to rally from 1-0 down in the semifinal and from 1-0 and 2-1 down in the final.  They have yet to trail in any match during this year’s World Cup and in fact have not allowed a goal before the 90th minute of any match.

Random fact:
Japan’s last loss at a World Cup was to England.  That was July 5, 2011 in Augsburg, Germany.  The catch is that Japan was already booked into the quarterfinals while England needed a result to be certain of moving on.  England’s win made them group winners and relegated Japan to 2nd place.  The result was epic quarterfinals for both.  Japan went to Wolfsburg and shocked hosts and defending champion Germany.  England went to Leverkusen, conceded a late goal to France and then lost on penalties after then coach Hope Powell received blank stares in answer to her request for volunteers to take kicks.

Breaking it down: The aesthetics of this match are likely to rest on the shoulders of England manager Mark Sampson.  The 32-year-old has employed several different tactics at this World Cup from sitting in a bunker against France to taking the match to Colombia.  We know what Japan will do.  They will keep the ball on the turf and try to pass and run the English into submission over the course of 90 minutes.  The feeling is that England will want to pick out a point of contention where they will try to break up Japan’s passing game and try to counter off that while not getting sucked into sitting back all evening.  There is also the matter of goalkeeping.  Karen Bardsley is hopeful to play but she had to come off against Canada after her eye suddenly swelled up.  Veteran Siobhan Chamberlain did a fine job while being sporadically tested, but Sampson and England will be more comfortable with Bardsley keeping goal.  Whoever starts in goal and whichever tactic they choose it might take the best match the team has played under Sampson to dethrone the defending champions.

Ellis gets tactics right in US win over Germany
PK miss, teammates boosted Johnston after mistake