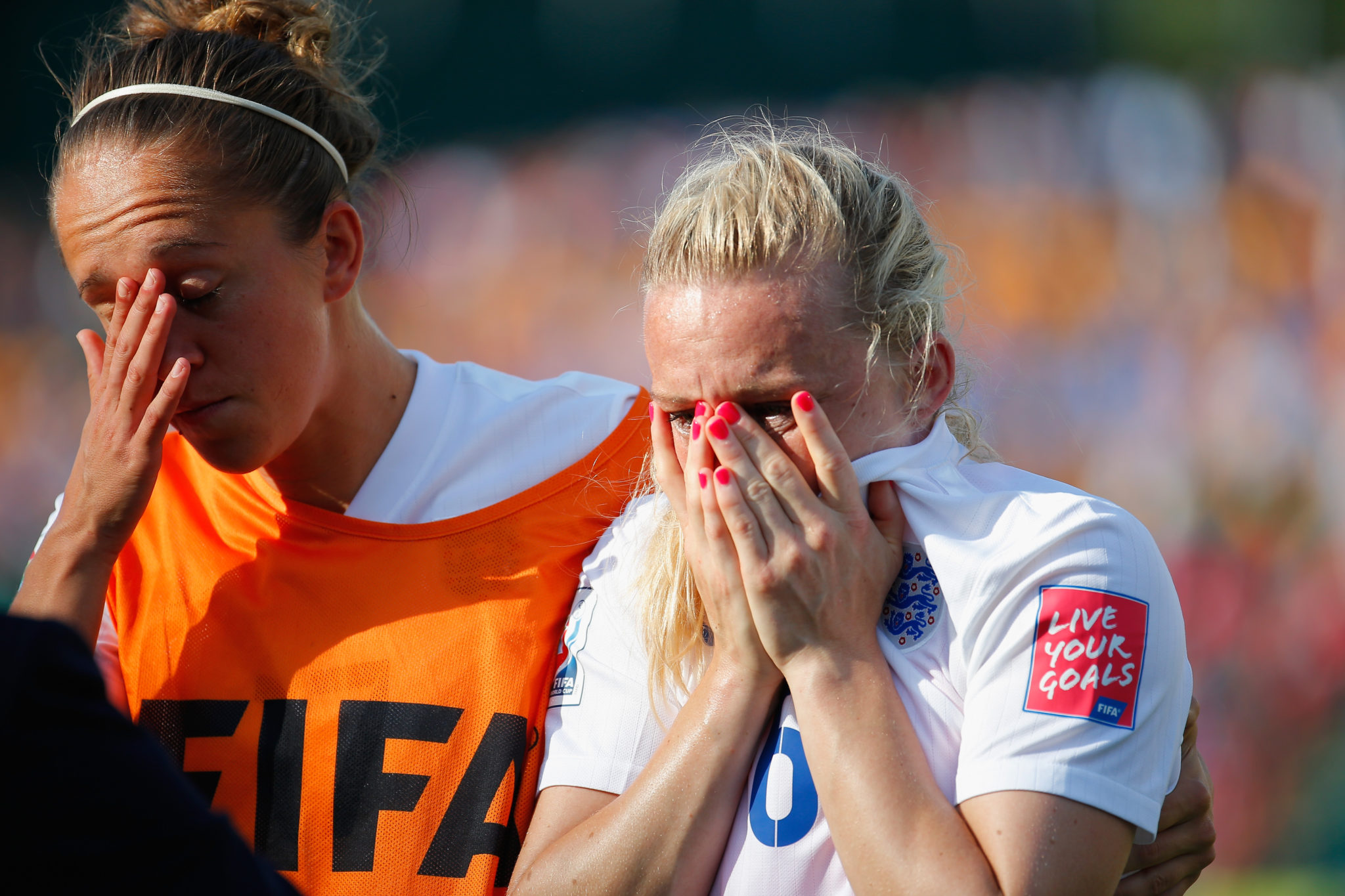 Laura Bassett started playing soccer in Bedworth, right smack dab in the center of England, at about the same time FIFA got around to sponsoring a women’s World Cup in 1991 (officially, the 1st FIFA World Championship for Women’s Football for the M&M’s Cup). Bedworth was a tiny club, and women’s soccer was still something that had gained as much resistance as traction (the FA wouldn’t sponsor an English national team until two years later), but that didn’t stop her.

At 13, she moved to nearby Coventry, at 17 to bigger Birmingham, where she played for eight years in obscurity, except to the small amount of people in England who recognized that women played football. At 19, she debuted for England, and has been in and out of the national team lineup for the last 12 years. Along that time, her nomadic career (she did stay at Birmingham for eight seasons) continued with stops with the New York Magic of the USL W-League, Arsenal, Leeds, back to Birmingham, to Chelsea, and to Notts County, where she’ll play this season. 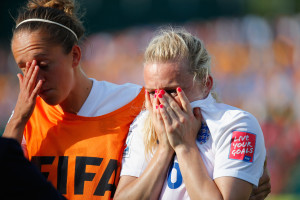 Bassett finally clawed her way onto a World Cup roster in 2011, but played in just one match (ironically in a win over Japan). The following year, in what stood to be the most high-profile tournament of her career, the Olympics in Great Britain. Bassett was left off the Great Britain roster (which was 18 players at the Olympics instead of 23 at this World Cup), and had to watch from the stands.

But, although she’ll turn 32 years old next month, here was Bassett this month in Canada leading an English defense that looked ready to go all the way to the World Cup final. She took an elbow to the face from Gaetane Thiney in the opener against France, but it was going to take more than that to get her out of the lineup she waited so long to break into.

And then, as England pushed for a winner in second-half stoppage time of the World Cup semifinals with their whole nation behind them, Japan broke down the right side with Bassett retreating as quickly as she could. She was in good position to cut off a cross, but she stumbled as the ball didn’t get to her quite as fast as she thought. She was able to get a toe to it, and 99 times out of 100 may have been lauded as a hero when the ball floated harmlessly out for a corner kick.

As we know now, this one didn’t.

Instead it flew over the head of helpless England goalkeeper Karen Bardsley, off the crossbar, and across the goal line by a yard. The moment Bassett could never dreamed of when she was a little girl, with the whole soccer world watching, ended with her inconsolable as England’s dream came to an end in the worst possible way, a 2-1 loss to Japan.

(It wasn’t the first time Bassett had been involved in a game-winning own goal. In Euro 2013, Bassett scored one of her two international goals only to see Spain win on a late own goal from Bardsley. England eventually did not escape the group stages, which led to the dismissal of long-time coach Hope Powell.)

We’ve already established at this World Cup that sports aren’t fair, but we learned something else on Wednesday. The outpouring of support for Bassett began almost immediately and came from all corners of the women’s soccer world. Everyone had been in a situation like Bassett at one time or another in their careers, and they knew how she must feel at this moment. They know, even though it’s a World Cup and a moment she worked her whole life for, that one moment should not define who she is, either as a player or a person.

They also know that these England players — especially Bassett, who was outstanding Wednesday — have absolutely nothing to hang their heads about. They were fantastic, and were probably slightly better (certainly on crossbars hit) against the defending world champions. Like France, the soccer gods just weren’t on their side on this night.

So while Bassett and England will always wonder what might have been, they’ll also know they left everything they possibly could on the artificial turf in Edmonton. And that’s all you can ever do.

What else did we learn Wednesday?

1) England’s transformation over the course of the World Cup was amazing
In a match now lost to history as many early group stage matches in a tournament become, England – with almost the same exact lineup it took the field with Wednesday – was dreadful in a loss to France. Yes, they only lost 1-0, but they never looked like they wanted to attack, content to sit back and defend, managing just three shots and no shots on goal until a hopeful long-range effort in stoppage time. Some three weeks later, they were all over a similarly technical team like Japan, giving them no space or time, and taking the match to them on set pieces and Japanese mistakes rarely seen in any other match. Lucy Bronze likely played her way onto the all-tournament team and several other English players showed well, as did their coach Mark Sampson, who figured it out as the tournament went along.

2) The ending should not take away from Japan’s accomplishments
Other games now lost to history are the two friendlies Japan and the United States played leading up to the 2011 World Cup, both completely dominated by the U.S. Of course, Japan stunningly won the World Cup a couple of months later, but will now go to its third straight major international final (all three against the U.S.). Before 2011, Japan had gotten out of a group stage of the World Cup only once (1995), and did have a fourth place at the Olympics in 2008, but that was mostly considered a fluke thanks to a kind draw (the U.S. dispatched of them 4-2 in the semifinals and Germany beat them easily in the bronze-medal game). You can argue they were a little lucky on Wednesday, but their success over the last four years is certainly not attributable to just good fortune.

3) Anna-Marie Keighley was a little over her head, but …
Keighley missed two first-half penalty calls, and generally looked nervous in this contest, which leads us to wonder why someone as inexperienced as she is would be in the middle of such a huge match. She celebrated her 33rd birthday on Tuesday, and only started officiating at any level in 2005. Although she did have some experience at the U-17 World Cup, how many high-level matches could she possibly have refereed in New Zealand? So (as Equalizer contributor Jennifer Gordon pointed out as well) it becomes a chicken and egg thing. We want experienced officials, but where are they supposed to get the experience in big women’s matches if there aren’t any? Still, putting a young referee from Oceania on a match like this seems to be asking for trouble.

4) Can we get Great Britain in the Olympics?
I’m no British citizen, but it seems like this English team has earned the right to play at the Olympics in Brazil next summer. And they would be even better with the addition of someone like a Kim Little or a Jess Fishlock, likely medal contenders. But politics still trumps soccer, I guess. Maybe they’ll do it for Laura Bassett?

5) On to the finals
The United States will enter as massive favorites after they were much more impressive in their semifinal, but they were four years ago as well. The biggest problem for Japan is how they will be able to keep the ball against the expected pressure of the U.S. and beyond that, how they’ll score. But, again, they managed to do it twice four years ago, so ruling them out completely seems extremely unwise. But we’ll see.