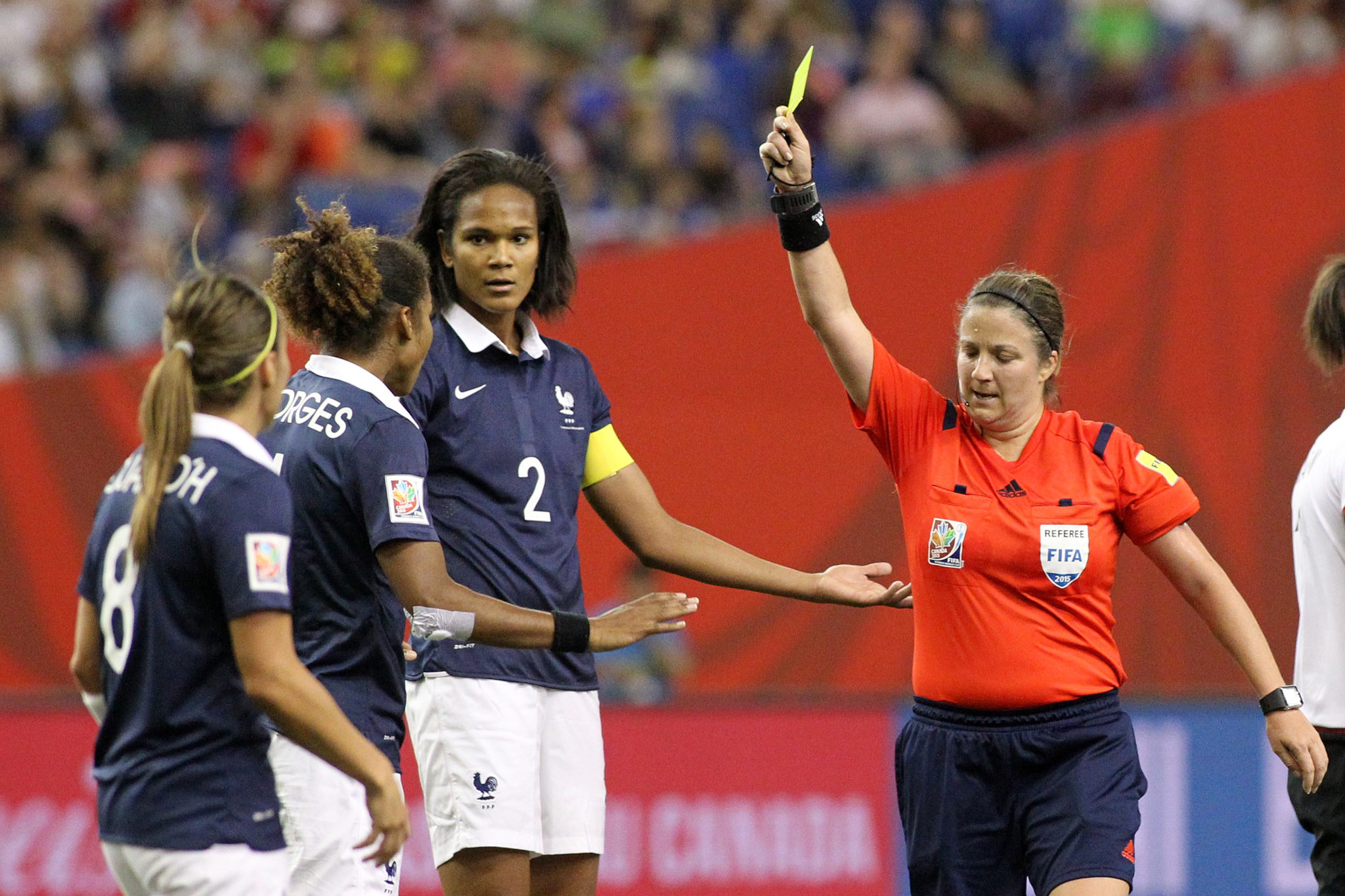 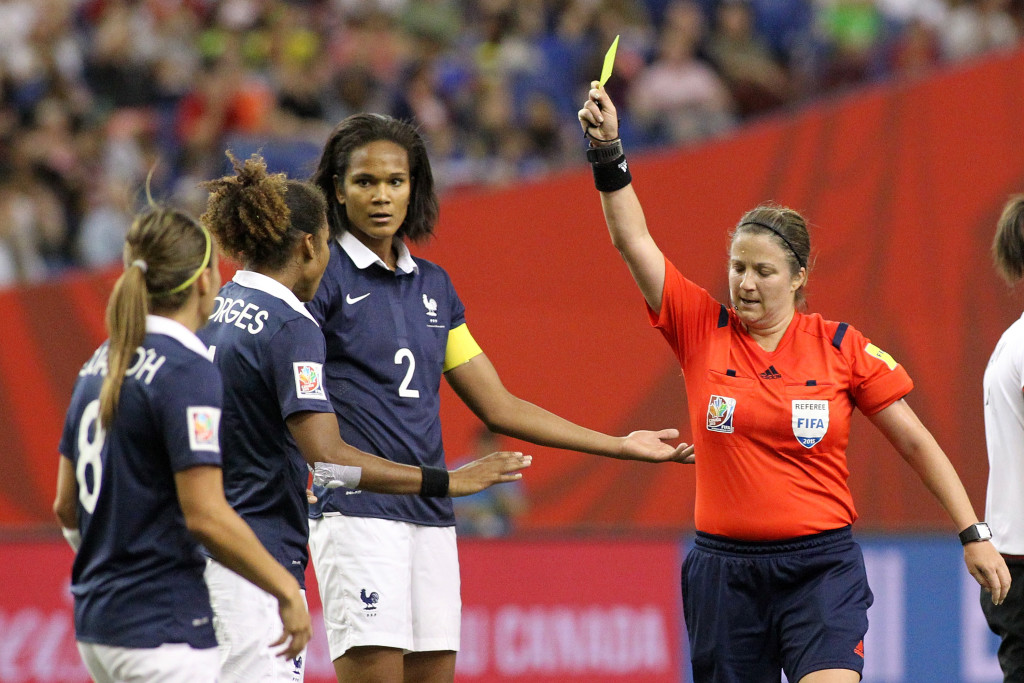 Referee Carol Anne Chenard was subject to criticism from outsiders for her performance in the France-Germany quarterfinal. (Getty Images)

VANCOUVER, British Columbia – In any sport, criticisms of a referee’s decisions are quite often the sticking point after a game.

Most notably, in soccer a referee is seemingly always under the microscope for a missed penalty, a foul a handball or a host of other decisions.

Referees and officials face increasing scrutiny, that is only increasing. This is part of the reason why it is so difficult to find referees who are up to the standards of being a referee at a World Cup. The referee pool simply is not expansive enough to pick officials who are all at the top-level quality wise. The notion that male referees should be involved in women’s soccer is a topic with many avenues.

All 73 match officials for the 2015 Women’s World Cup are females, which is by design from FIFA.

Massimo Busacca, FIFA’s head of refereeing, talked about the understanding of football from female referees. It would be brilliant if former players took more of an interest in becoming a referee, he says. They know the game well because they have played it and most stay fit. The confederations need to do a better job supporting and helping to find Females who want to be a referee.

“I saw a lot of sacrifice, most of them, they are officiating men in their leagues so they know what they’re doing,” he said. “We need more football understanding. We have to find referees that have played football before and they know, because they’ve been playing (football) a little bit before. In my opinion, we can find this even in the women’s side. We have to go to the confederations and say we want to continue with women. We have to respect them, they know what is football. We have here some referees that have played in a World Cup as players and I see the difference. They’re running well, they understand football, they know what is a foul. We have to respect and continue with women in women’s competitions, absolutely, but we have to develop.”

The number of coaches involved in women’s soccer are predominately male. Among the teams in the round of 16, only Jill Ellis, Silvia Neid, Pia Sundhage and Martina Voss-Tecklenburg are women. Neid and Ellis have Germany and the United States, respectively, in Tuesday’s semifinal.

Tatjana Haenni, FIFA deputy director of competitions and head of women’s football, would like to see more female referees. The opportunities for women in sport are not what they are for men. At the top level, coaching is slowly being taken over by men and refereeing should be an option for females, first, she says.

“Women are trying to get into football like in other areas of society in culture and it’s a cultural reflection,” Haenni says. “I think now that women’s football has become so popular I see it as a risk that we have narrowed that discussion. Why don’t we have male referees?,” she asks rhetorically.

[JOHAL: Why Canada missed an opportunity with quarterfinal exit]

“We have more male coaches than females. I think we have to find a balance between having that know-how and expertise. At the same time we have to give career opportunities to the women who want to be involved in women’s football. On the coaching side we see it. On the top level, women are getting lesser in numbers and I think on the women’s refereeing side. We now have to decide, do we give more opportunities to women’s referees and at the same time ask if the coaches to be at the top level of the game? Or do we still continue not doing enough, and at one point women will have huge difficulties to be at the top level of the game?” 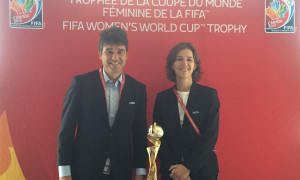 The former Switzerland international clarified her thoughts on the possible inclusion of male referees at future FIFA Women’s World Cups. It’s simply not going to happen and is not a foreseeable solution.

“I don’t think we said we’re considering taking male referees,” Haenni said. “I think right now, not at all. I think we need to look at how can we maybe make former players actual referees. I think there’s no need for that (male referees). Women’s football as a sport is developing, teams are developing, players are developing and for the referees it’s just the same.”

Busacca refereed at the highest of stages in the men’s game. Including World Cup 2006 and 2010, Euro 2008, and the Champions League final in 2009. He has seen it all and was appointed to his current position in July 2011. The standard that we have seen at the Women’s World Cup is on par for what you would see at a major football tournament, he says. Players and referees are human and make mistakes. For the most part, Busacca is pleased with what he has seen as the tournament has progressed.

“Talking about the Group Stage, of course we have to admit there were probably some (complaints). We had eight more teams. The 24 teams were on the same level? No. Some go home, some went on because they were not on the same level. The referees are the same. We had to release some who were not probably at the level of this competition to arrive until the end. We are human.”

[LAULETTA: Sasaki thinks no travel will benefit Japan in semifinal]

The move to take the World Cup from 16 teams to 24 teams has been a positive step for the growth of women’s soccer. Yes, there were a few lopsided results, but the only way that burgeoning women’s soccer programs can grow is to participate.

“I’m really 100 percent convinced that this was the right step,” Haenni said of going to 24 teams. “Of course there are some teams here which you can see from the quality is not the same. The top teams and then maybe there is a difference to some of the teams. I think for the tournament itself, we had entertaining games. We had great games. The match Thailand vs. Côte d’Ivoire was really entertaining to watch. Of course you can say they have some ways to go to maybe be a potential World Cup winner, but the match is entertaining, the crowd had fun. It was great to watch. For the tournament itself I don’t think that we had any problems or big issues that the teams were not prepared or not good enough. They did an excellent job.”

“I think for the confederations organizing the qualifiers, if they know they had a slot more or two slots more it gives more chances to other teams. I think Europe is a key example, but also South America. Some other teams had a chance to qualify. When you have a chance to qualify, you prepare better, the national team gets more support, they play more matches. That all then trickles down to the leagues, players, and that’s what we need.”

One final topic discussed during the FIFA refereeing and tactical study briefing on Monday was diving. You hardly see any diving or embellishment in women’s soccer. In those rare instances which it appears, players like Anja Mittag apologize after a match, because she didn’t intend to fall and cause the referee to award a penalty against the opponent (Sweden, in this case).

There also aren’t mass confrontations like in the men’s game.

“It’s just a different world for female players,” said Haenni, who played for clubs like FC Bern, Rapid Lugano, and SV Seebach. “They enjoy it, they feel privileged to be here and they’re happy to be here. It’s a different culture. Their daily life back home is different too. They play in most of the leagues not in front of so many spectators. They’re not paid so much, most of them work or study. I think that has an influence on it. They enjoy the game, they want to play the game.”

While refereeing may not be at its absolute perfect best, neither are performances from the teams on the pitch. Women’s soccer is still growing and developing and that includes those on and off the pitch whose decisions may not always be agreeable to everyone.