Nigeria parts with Okon after group-stage exit at WC 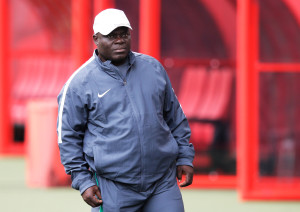 Perhaps he should have prepared for this one.

The Nigerian Football Federation on Monday that Edwin Okon’s contract as coach of the women’s national team would not be renewed. Christopher Danjuma will serve as his interim replacement.

Nigeria exited the 2015 Women’s World Cup earlier this month at the group stage, finishing fourth of four teams in a tough Group D and earning just one point in a 3-3 draw with Sweden.

Okon spent the entire tournament backing up the claim that Nigeria is somewhat of a mysterious team. He claimed before all three of his team’s games that he had not watched game film of the opponent, and that he knew nothing about them. His focus was on his team, he maintained throughout the tournament.

“I don’t know anything about the Swedish team,” said a defiant Okon before his team’s World Cup opener against the No. 5-ranked Swedes.

Nigeria has qualified for all seven Women’s World Cups but only advanced out of the group stage once, in 1999.

Danjuma will be in charge for at least the duration of Olympic qualifiers, which begin for Nigeria in a few weeks in a tough home-and-home test against Equatorial Guinea. The search is on for a permanent coach, NFF technical and development committee chief Felix Anyansi-Agwu said.

“We commend Okon and his crew for the services rendered to the country, and they did well to reclaim the African Women Championship title for the country in Namibia in October 2014, thus qualifying the team for the Women’s World Cup in Canada,” he said.

Okon took over the position in August 2013.