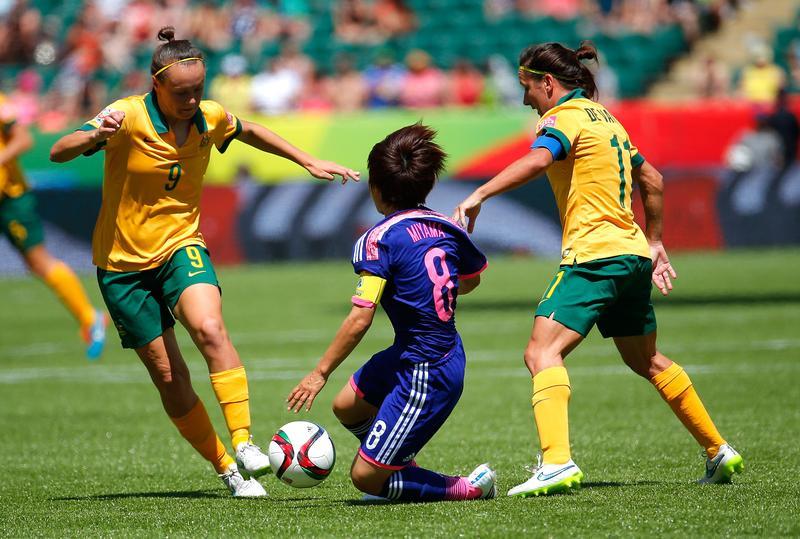 EDMONTON, Alberta — Second-half substitute Mana Iwabuchi got on the end of a busted corner kick in the 88th minute to send holders Japan back to the semifinals with a 1-0 victory over Australia.

Aya Miyama’s ball into the box was first touched by the Australian defense, but they were unable to clear it out of danger. Defender Azusa Iwashimizu fought through an Australian player while on the ground to keep it alive and sent a pass across the six to Iwabuchi, who had little trouble with the finish. Japan had never been to the final four of the Women’s World Cup before going all the way in 2011. The quarterfinal exit for Australia matches their best showing from 2007 and 2011, but they won a knockout match for the first time this year, beating Brazil in the round of 16.

The first-ever World Cup match between Asian Football Confederation sides saw Japan as the better team through most of the match. They were the better side during a scoreless opening half. Miyama controlled the midfield and even got off a quick shot from distance for the best chance of the half. Australian goalkeeper Lydia Williams parried that one over the top. Miyama was also instrumental in creating a pair of chances for Shinobu Ohno, but both went hopelessly high.

Australia made one solid chance, but Iwashimizu was there to defend Kyah Simon and take away the opportunity. That was about the only time Simon was dangerous in the opening 45 minutes. Australia were otherwise forced wide by solid Japanese defending and poor organizational balls out of the back and defensive midfield.

The second half saw much of the same. A relentless Lisa De Vanna was taken out in the 67th minute and her replacement, Larissa Crummer, was only able to get a touch or two in an attacking position. In the end, Japan were able to control the match through Miyama’s masterful play in midfield and some excellent flank play, particularly from Nahomi Kawasumi.

To their credit, Australia rarely broke defensive shape, and in the end of the play that defeated them was a failed clearance on a corner kick. Alanna Kennedy played a superb match in central defense and Elise Kellond-Knight was good from a defensive standpoint. Not long before the winner, Kellond-Knight hustled back to her own penalty area to knock a sure chance away from Saori Ariyoshi.

Saturday’s win marked the fifth straight at this World Cup by one goal for Japan, setting a record.

Japan will remain in Edmonton to play Canada or England here on Wednesday night.