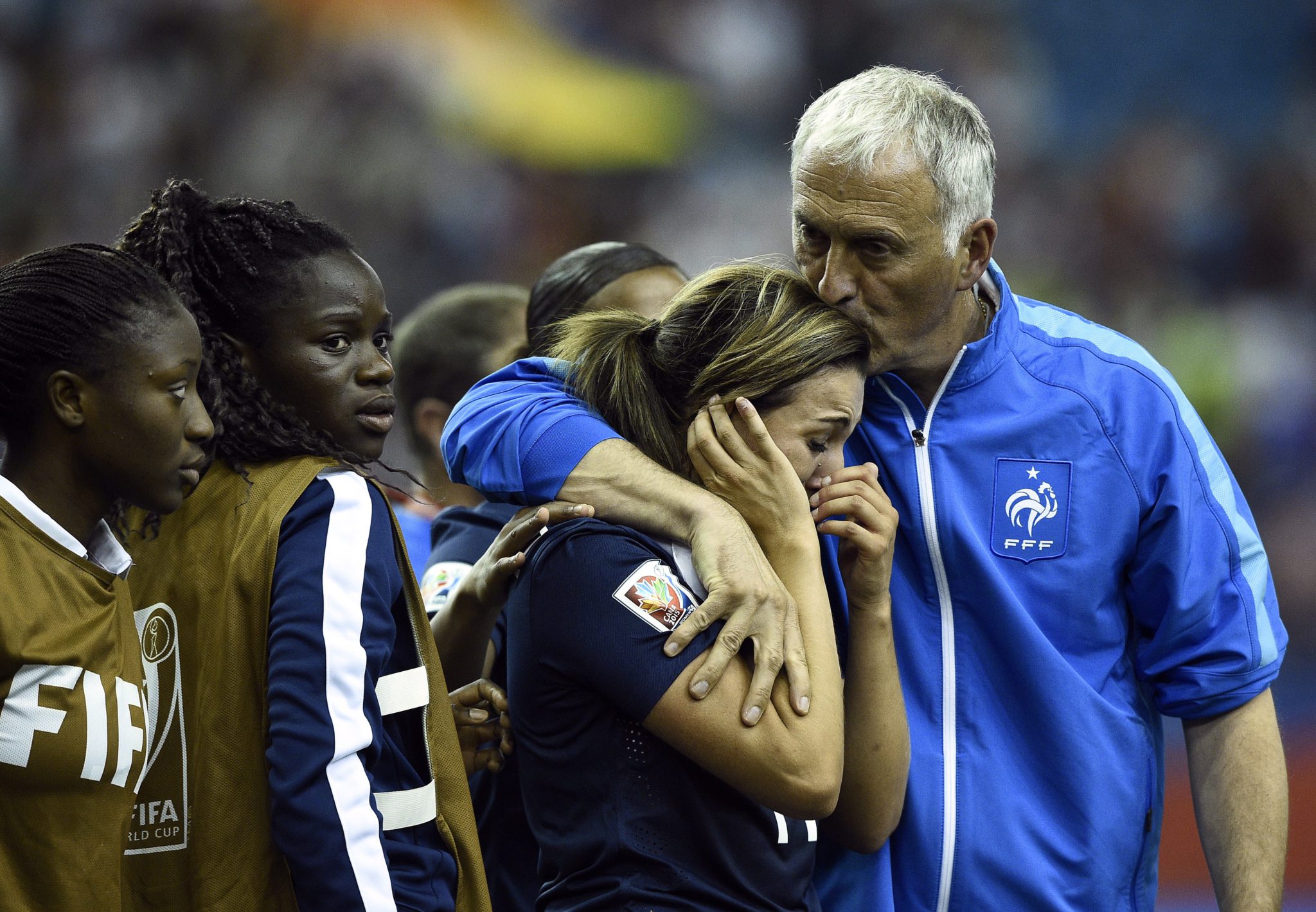 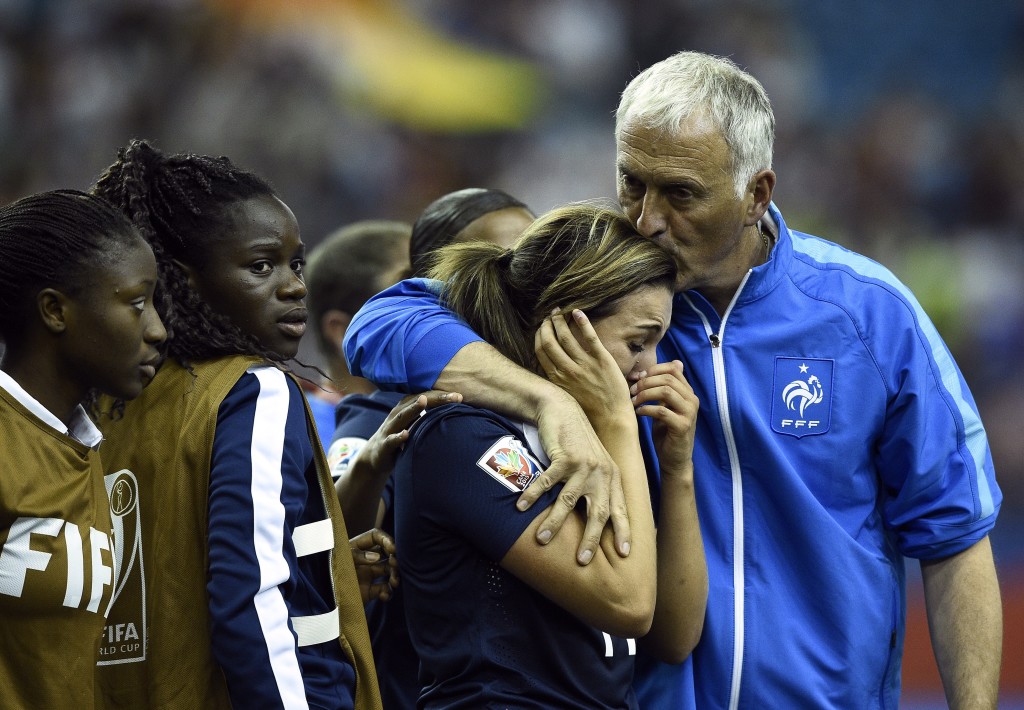 Socrates was once quite the soccer player. At least according to Monty Python he was. And who am I to doubt the esteemed historian?

Socrates’ main gig, of course, was philosophy, and in Plato’s Republic engaged in a debate about justice. His most stubborn adversary was likely Thrasymachus, who eventually argued “Injustice, if it is on a large enough scale, is stronger, freer, and more masterly than justice.”

We have no idea what Socrates thought of the rules of soccer, most of which are now so ingrained that we rarely question them. But with France up 1-0 and the better team for most of the 83 minutes played in the World Cup quarterfinal on Friday against slightly favored Germany, the ball came up and hit French defender Amel Majri’s arm. Majri’s arm was slightly away from her body and was not in a natural position, and she was standing about a yard inside the top of penalty area, likely able to escape with one step forward or one step to the side.

But by the rules of the game as they are currently interpreted, there was no escape. Canadian referee Carol Anne Chenard, almost apologetically, pointed to the penalty spot, Celia Sasic calmly buried it, and the rest – France missing several chances and eventually losing in a penalty kick shootout – is now history.

Was Majri’s punishment just by any reasonable standard? I think my man Socrates would probably agree it wasn’t. A free kick 12 yards from the goal in the center of the field with just the goalkeeper to beat as penance for an unintentional handball (technically by the letter of the law, “handling” must be intentional, but that’s for another day) that happened nowhere near the net? Doesn’t make a whole lot of sense.

Of course, there’s a lot in life that doesn’t compute, and most of the time, as we will here, we’ll shrug our shoulders and move on. With a great deal of class, France and its coach Philippe Bergeroo did not make excuses afterward, despite dominating most of the afternoon and missing two bookend point-blank opportunities that likely would have won the game (Louisa Necib in the first minute and Gaetane Thiney in the 119th) and several other opportunities that could have resulted in a goal.

The grace in defeat was especially admirable given how long France had waited for such a moment, to finally beat a top team in a big tournament with a great chance to win a World Cup after disappointment in 2011 (World Cup loss to United States), 2012 (Olympic loss to Japan), and 2013 (Euro upset loss to Denmark, also in penalties after outshooting the Danes 31-4 in the contest). (Camille Abily did have a go at FIFA about the rigged draw, but rightfully so.)

So no, it didn’t seem like justice was done when Nadine Angerer saved the final penalty and Germany was able to celebrate a berth in the semifinals while most of the French team was reduced to tears. But that’s sports. And we love it, even though it’s a world maybe Thrasymachus would have understood better than Socrates.

What did we learn Friday?

1) You have to take your chances in soccer
We can debate the penalty until the end of time, but (as was alluded to earlier), France should have put the game away in regulation with Necib and several other chances, and certainly with Thiney from just a couple of yards out and an empty goal late in extra time. Bergeroo, who seemed very calm in the postgame press conference, admitted as much and maybe he was not as bothered as even many of us neutrals watching because ….

2) France won’t win, but they proved they are there
In 2011 and 2012, France just came up short in their shot to prove themselves, second best against the United States in the World Cup semifinals, and beaten by Japan in the Olympic semis (and then losing to Canada in the bronze medal game even). Even with an embarrassing loss to Colombia in the group stages, France outplayed tournament favorite Germany Friday, the soccer gods just weren’t on their side. They will return as one of the favorites in Brazil next year, get to play in the Euros in 2017, and will hopefully get to play in front of full stadiums of their fans in 2019, which seems like a long time away, but it will come fast. Well, not that fast.

3) Nadine Angerer is finishing up her career nicely
It’s tough to get a read on a goalkeeper like Angerer (or Hope Solo) when their team doesn’t allow them to do much. Angerer has had her moments of indecisiveness in NWSL, and it reamined to be seen what she would do when called upon. But she was there when Germany needed her Friday, especially at the end, when her penalty save sealed a berth in the semifinals.

4) France took a page out of Germany’s book
It took some guts for France to press as much as it did against Germany, and it really seemed to free up Louisa Necib to play her best game — well, that I’ve ever seen her play (alas, I don’t watch many Lyon matches, although I should). Germany had no answer for Elodie Thomis (who was strangely subbed out) and the combination of Majri (playing left back), Jessica Houara, and Amandine Henry just wouldn’t let Germany pass, with some occasional help from Laura Georges and Wendie Renard. Only when they had the lead late did they back off a little and that’s when Germany got their penalty kick. Try again next time, I guess, unfortunately.

5) What next for Germany?
Germany appears to be more banged up than the United States ahead of the semifinals. Dzsenifer Marozsan played well as a second-half sub, but still has a bad ankle that was apparently really swollen after the match. Melanie Behringer was also hobbled after turning her ankle in the second half. They will get Saskia Bartusiak back from suspension, so they likely will be able to field the starting XI they want. But the U.S. will try to follow France’s lead and just make things impossible to play through. Germany will need better out of Anja Mittag, Lena Goessling and Melanie Leupolz than they got Friday. But survive and advance. Germany had far more chances in its quarterfinal loss to Japan four years ago, so they’re not going to apologize for winning this one on a day where they struggled.