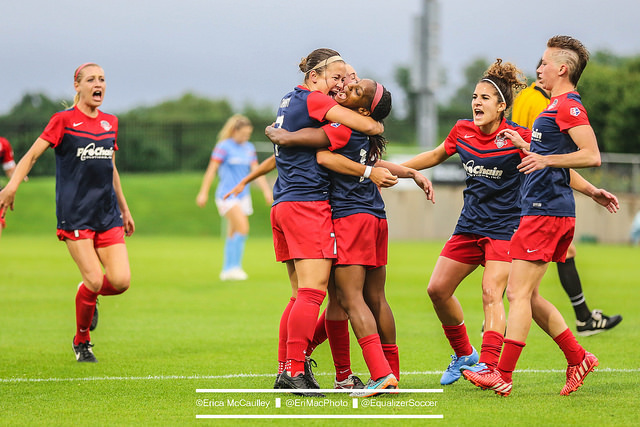 BOYDS, Md. — The Washington Spirit remain undefeated at home Saturday evening after a 1-0 victory over the Houston Dash. Crystal Dunn’s league-leading 7th tally in the 56th minute proved to be the difference.

Given the wet field conditions and the high pressure style employed by both sides, it seemed like the game would be won by the team that capitalized on a mistake. That’s not how the match played out however. The match was decided instead by a brilliant piece of individual work by Dunn. Amanda DaCosta played a ball over Dunn who then beat two Houston defenders and fired a shot that hit the crossbar and bounced in for a goal.

Whenever Dunn had possession, Houston swarmed and Dunn found herself trying to take on 2 or 3 players at a time. For the most part the Dash’s strategy worked but when Dunn got loose she created problems for the visitors.

“She’s a handful and I think she’s one that you can keep under wraps for 89 minutes and all she needs is that one chance and I thought for the most part I think we did a pretty good job on her tonight but the one opportunity she gets she keeps getting those chances she’ll eventually put one away,” Dash Head Coach Randy Waldrum commented about Dunn. “She’s just a fantastic player. If you look at the two teams, that was the difference tonight.”

Dunn nearly added another just before stoppage when she got around three Houston players and fired a shot that required a full extension save from Bianca Henninger to keep the scoreline intact.

For the Dash, it was Dunn’s college teammate Kealia Ohai who provided much of the offensive spark. In fact, Houston defender Ella Masar referred to the game as the “Crystal Dunn and Kealia Ohai show.” Dunn and Ohai were teammates at North Carolina and were taken first and second in the 2014 draft.

Ohai nearly put Houston on the scoreboard a few minutes prior to Dunn’s strike after a series of poor giveaways by the Spirit. Ohai struck a low driven ball inside the box towards goal but Spirit keeper Kelsey Wys got just enough of the ball to shepherd it out of danger.

The UNC product nearly had the equalizer in the 84th minute. While on the attack, Ohai got a bit of space between her and Washington’s Whitney Church and fired a rocket towards goal. Wys made a tremendous save to preserve the shutout.

While Ohai and Dunn were electric, perhaps the most impressive feat of the night was Washington maintaining a clean sheet despite starting 3 rookies, Megan Oyster, Whitney Church, and Caprice Dydasco on the backline as well as shifting captain Tori Huster from midfield to center back. It was only the second time this season that Spirit managed a shutout, a feat that been a rarely accomplished for by the club throughout its existence.

“I thought they were absolutely superb,” Spirit head coach Mark Parsons said about his defense. “At halftime, probably three of my points were how great those guys were and I thought the rest of us had to pick it up a bit. So really proud of Caprice, Megan and Whitney. I think we knew how talented they all were when we got them in the draft, we were excited at the draft and when you see a performance like that I think you realize how successful that day was back in January and I think it helped us big time tonight.”

For the Dash, Masar thought her team needed to more bite offensively and relied a bit too heavily on Ohai.

“I think we got to be a bit more dynamic and create a bit more… we need someone else to step up and help her out a bit,” Masar said postgame.

Despite the loss, Waldrum thought his team fared pretty well during the stretch without its national team players. The Dash was one of the team’s most impacted by the international tournament. Saturday’s loss ended a five game undefeated streak for the Texas side.

“Every coach will tell you they would have liked to win a few more points and been in a little bit better shape than we are but I think we’re in a good place right now especially with our players coming back now, Waldrum commented adding, “I think we’re playing well, so I’m really proud of where we are right now.”

NWSL Week 11 Preview
Abily rips FIFA: ‘They must stop taking us for idiots’