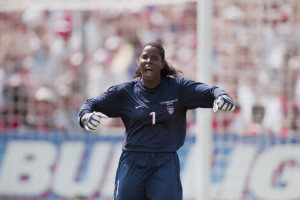 The rematch is the obvious subplot that has media and fans buzzing, but the reality is that there is hardly any connection amongst current players to that game.

“Honestly, I didn’t watch the match at that time,” China defender Wu Haiyan said. “I watched some replays later in life.”

Most of China’s current players were still in their early years of grade school when the 1999 final was played. China is the youngest team in the quarterfinals, with an average age of 23.4 years old. They know plenty about that game (“Yes of course, we know a lot about that match, because lots of our role models, our idols, are in that team,” Wang Shanshan says), but only U.S. defender Christie Rampone remains an active player from 1999 of the 46 combined on the teams’ current rosters.

Still, it is impossible not to draw some comparisons between Friday’s quarterfinal and that famous day in 1999.

“There is some nostalgia,” Briana Scurry says.

Scurry was the goalkeeper for the United States at that 1999 World Cup and holds the U.S. record for most shutouts at a World Cup (10). She saved Liu Ying’s penalty – China’s third – for the only unsuccessful take of the 1999 shootout. Brandi Chastain converted the final kick and the iconic celebration followed for the Americans.

That it has been 16 years since these two teams have met at a World Cup speaks somewhat to the decline of China’s program, which is back at the Women’s World Cup after missing the 2011 tournament entirely. China already met its objective of getting to the quarterfinals at this World Cup.

“China is in a different position than the U.S.,” Scurry said. “They are trying to revitalize their team, and this is a great opportunity for them to show the world where they’re at with that.”

“What’s past is past,” he said. “It doesn’t make any difference,” he added. And finally, more pointedly, “I don’t think it is vengeance or anything like that, it is just a match.”

Scurry lauded this United States team’s defensive performance. The Americans have allowed only one goal this tournament and are currently riding a 333-minute shutout streak.

“From that perspective, I think they’ve been phenomenal, better than any team I’ve seen since when I played,” Scurry said.

[KASSOUF: Defense reason for U.S. success  |  Solo quietly a part of that]

But the United States remains a work-in-progress on the attacking front, as seen throughout the first four World Cup matches and acknowledged by players and coaches.

The road to a World Cup title is never smooth, however. The U.S. had to overcome a disastrous start to its 1999 quarterfinal against Germany before defeating

“I remember World Cups. I played in four of them. There are going to be times when the road is bumpy. And this is just a bumpy time for them right now.”

Scurry’s prediction is a 2-1 U.S. victory, with a big showing from Christen Press. There may, however, be another bump or two along the way.

World Cup quarterfinal preview: Germany-France
US in need of tactical change ahead of quarterfinal