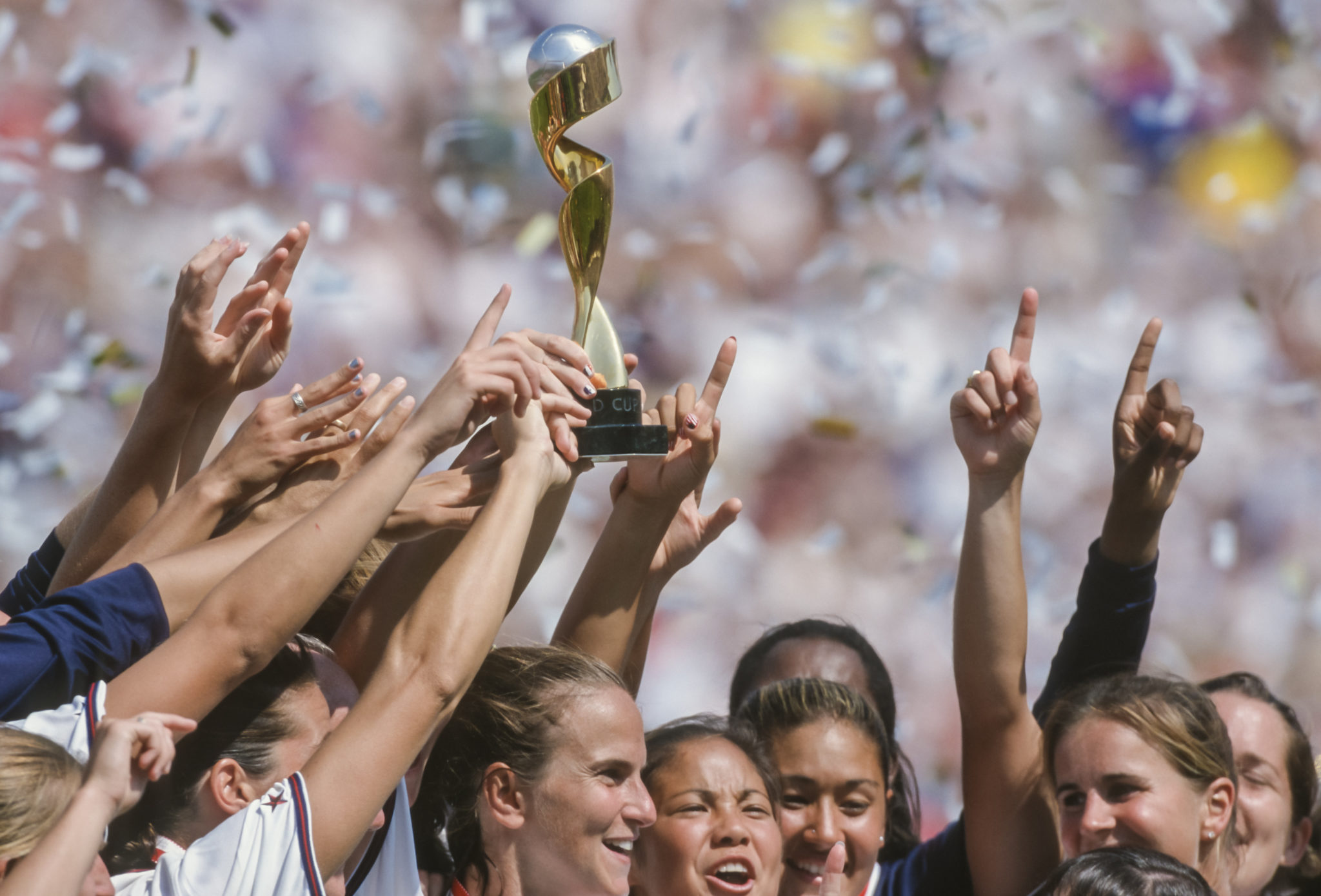 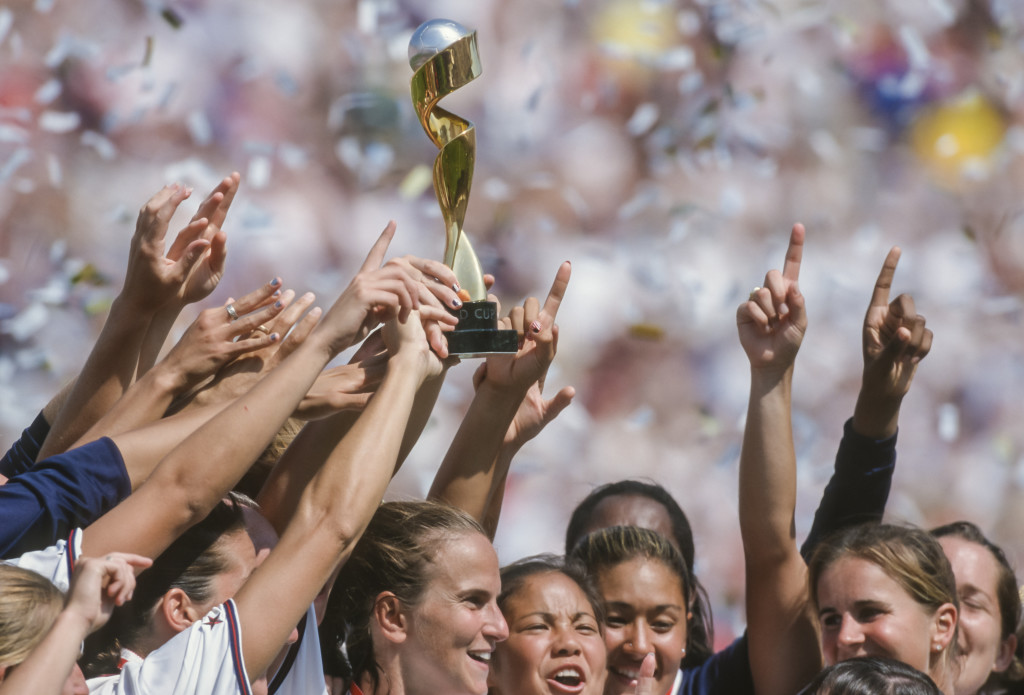 Before the U.S. won the 1999 World Cup in the final against China, they had to come back against Germany in the quarterfinals. (Getty Images)

The World Cup is 44 matches old, leaving eight to be played, including the mostly inconsequential third-place match.  There has been some fantastic soccer and great drama, but the 2015 Women’s World Cup is still searching for the match we’ll be talking about for years to come.

For many, there is something ranging from hope to anticipation that Friday’s quarterfinal between Germany and France will produce that match.  The teams are ranked No. 1 and No. 3 in the world, respectively, and both tuned up with masterclass performances in their round-of-16 matches.

Before that one gets going here is a look at one match of interest from each of the previous six World Cups.  There are no specific criteria other than the matches being memorable for one reason or another.  And we left out finals.  Finals stand on their own merits.

It was only 24 years ago but long enough ago that FIFA did not acknowledge the tournament as the World Cup (instead going with World Championship for Women’s Football) nor did the organization believe women could handle 90-minute matches.  So when Rita Guarino scored for Italy in the 80th minute to force this one to extra time it was actually on the stroke of full time.  Italy had already equalized in the 1st half and pushed Norway to the limit.  The Norwegians eventually prevailed on Tina Svensson’s extra-time penalty and wound up in the final (where Norway lost to the United States) before winning the 1995 version (the 90-minute edition called the Women’s World Cup.)  Italy missed that 1995 World Cup and have only been to one more, 1999, when they went out after the group stage.  It is hard to wonder if the programs would have evolved differently had this one turned out different.  Guarino, who netted the late goal that extended the match, was one of the great scorers in the nascent days of women’s soccer.

Probably the most bitter games of the early rivalry between the teams.  In a rematch of the ’91 final, Norway went ahead in the 10th minute through Ann Kristin Aarones and held on to hand the Americans their first-ever loss in the World Cup.  Heidi Stoere saw her second caution in the 76th minute, after which the United States hit two crossbars but never managed to come up with the goal to force extra time.  Afterwards, U.S. players were particularly displeased to see their vanquishers celebrate by doing The Train—crawling around the field attached by their hands to teammates’ ankles.  The United States got some revenge the next year in the same stage of the inaugural Olympic tournament, winning on Shannon MacMillan’s golden goal.  Four years after that Norway won the gold medal, overcoming a late U.S. equalizer to win on Dagny Mellgren’s golden goal.  The final laugh—for now—came in 2003, a 1-0 United States win that put Norway out of the World Cup and the following year’s Olympics.

This match is famous for Brandi Chastain and Brianna Scurry suffering a breakdown in communication leading to the former putting the ball past her own keeper and handing Germany a 1-0 lead in the 5th minute.  But it was really much more than that.  It was the first knockout game for the United States.  It was the World Cup they had decided to transform into a big event.  But an early U.S. loss would have been cataclysmic to the final product.  In other words, this may have been the most pressure-packed match the United States has ever played.  And mostly forgotten by history is that even though Tiffeny Milbrett tied the match 11 minutes after the own goal, Germany led at halftime on a stoppage-time goal by Bettina Weigmann.  Following a halftime tongue-lashing from Tony DiCicco, Chastain atoned for her own goal by tying it up in the 49th minute, and Joy Fawcett became an unlikely hero with the game-winner in the 66th.  Fawcett’s goal forced Kate Sobrero (now Markgraf) to pay up on a bet by coloring her hair red, and two matches later the United States were world champions.

Four years after the 1999 match I had the privilege of interviewing Germany’s Maren Meinert.  By that time I too had forgotten that Germany had two different leads in the 1999 match and when I asked her about the team having the lead, Meinert’s eyes turned to stone and she said coldly, “We had the lead twice in that match.”  A few months later Meinert and her German teammates were ready to roll in the semifinal in Portland.  The United States had outscored opponents 12-1 heading into the match but there was an underlying feeling that it was Germany’s time.  Kerstin Garefrekes gave the Germans a lead after a quarter of an hour and the United States spent the next 75 minutes searching for an equalizer that never came.  Finally Germany scored two goals in stoppage time to make the final score, 3-0, look worse than it probably was.  One week later, Meinert and Germany were holding the World Cup.

Maybe the semifinal was better remembered for Greg Ryan’s coaching gaffe and Hope Solo’s remarks afterwards, but haven’t we heard enough about that? Instead let’s go to the Group C finale, in which Australia knew that barring a Ghana miracle they needed a draw to go to the knockout round for the first time. (No dice from Ghana, who lost 7-2 to Norway.)  Things did not begin well for Australia when Melissa Tancredi scored before a minute was played.  Australia fought and clawed until eventually tying it up through Collette McCallum just after halftime.  But in the 85th minute, Christine Sinclair put Canada back on top.  The match cleared 90 minutes until somehow Cheryl Salisbury came open in the box and leveled the match to send Canada home and Australia to the quarterfinals.  In the quarters, Australia rallied from 2-0 down only to lose to Brazil, 3-2, but Salisbury’s goal was a huge moment for the program and a springboard to what the current Australia squad is accomplishing.

A dozen years after pushing but not knocking over the United States on American soil, Germany found themselves on the other side of the storyline.  They were hosts and holders, and much energy had been put into the outcome of the World Cup.  Their group matches were hardly masterpieces but then they were all wins.  The quarterfinals, though, represented an instant surge of pressure.  Germany looked the superior side for much of the match, but they could not produce a goal.  In extra time, Japan broke through via Karina Maruyama and held on for a 1-0 upset that rocked the foundation of the World Cup.  Germany was not able to duplicate the United States’ feat of playing and winning the final in 1999 in front of their home fans.  And the loss was a double blow as Sweden’s win a day later put the Germans out of the 2012 Olympics.  Japan, meanwhile, had to rally three separate times in their next two matches—from 1-0 down to beat Sweden 3-1, and twice against the United States to finish 2-2—before winning the World Cup on penalties over the U.S.