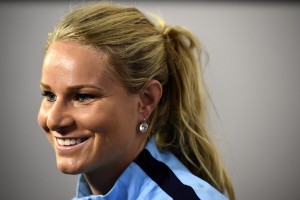 Key players:
Germany – Babett Peter: With Saskia Bartusiak suspended thanks to FIFA’s (not so) popular yellow card rule, it’s likely Peter will be the one to take her place in the center of the German defense. It should not affect Germany as much as it would a less deep squad; Peter is 27 and has 91 caps of experience at the international level, and was a starter throughout the 2011 World Cup. She also started and played 90 minutes against Thailand, so she won’t be completely cold here. However, it’s been a while since Peter has featured as a starter for Silvia Neid, and making a change in the backline before such a big match can be tricky. The United States was in a similar position in the 2011 semifinals when Rachel Buehler was suspended (red card), and Becky Sauerbrunn filled in admirably against … France, of course.

France – Marie-Laure Delie: For some reason, Philippe Bergeroo kept Delie on the bench for not one but two matches in the group stage (she did come on as a sub in one), but Delie still leads France in goals (tied with Eugenie Le Sommer) and shots on goal. Germany’s defense has not really been tested in this tournament and with Bartusiak suspended, Delie may be ready to have a big Friday afternoon that could see France win the biggest game in its history.

Under the radar key players:
Germany – Alexandra Popp: Popp has starred everywhere she’s played since she was in Germany’s youth teams, but she hasn’t looked up to the task in this World Cup, most importantly where it matters most, in the final third. She has the size, strength, and left foot to score a key goal or two for Germany and they may need her to take the chances they set up for her in this one (she currently leads the team in shots with 18 but only seven have been on goal, just one has gone in).

France – Sarah Bouhaddi: She hasn’t had a whole lot to do, which unfortunately is often the case when France plays, and is not widely considered to be on the same level as the goalkeepers for the other favorites (USA’s Hope Solo and Germany’s Nadine Angerer). It’s not like she isn’t experienced — when she takes the field Friday in Montreal, it will be the 99th international cap for the 28-year-old. This could be her chance to make a name for herself, though, Germany will certainly test her and a couple of big saves in key spots could give France all the confidence they need to put themselves over the top and into the semifinals.

Inside the numbers:
2 — Competitive international losses for Germany dating back to 2008. One, of course, was to Japan in the 2011 World Cup and the other came in the group stage of Euro 2013 when they fell to Norway, a loss they avenged in the final (they, of course, did not qualify for the 2012 Olympics thanks to that 2011 Japan loss). Their record of titles is truly impressive: 2003 and 2007 World Cup champs to go with six straight European titles, and eight of nine (mysteriously, they have never even been to an Olympic gold-medal game). Germany was also undefeated in 2015 World Cup qualifying (it didn’t have to qualify in 2011 as hosts), and qualifying for both the 2009 and 2013 Euros. They just don’t lose very often.

Random stat:
France and Germany have somehow met only three times ever in competitive matches. They were in the same group in 2011 and Germany rolled to a 4-2 win, but the other two were worse: a 3-0 beating that eliminated them in the group stage of Euro 2005 and a 5-1 loss four years later in Finland (they did advance and lost in penalties to the Netherlands in the quarterfinals). That match could possibly be seen as the turning point for the French, until then they had qualified for just a single World Cup and weren’t even in the top echelon of Europe, let alone in Germany’s class. Six years later, here we are.

Breaking it down:
Although the two teams meeting this early is more than likely unfair, it’s hard to imagine a more mouthwatering match between any two teams in the world from a technical and tactical perspective (obviously a US-Canada final would be fascinating culturally, but probably not as compelling on the field). Germany has rolled through everyone, including Sweden in its last game, using high pressure and frightening opponents into mistakes, but they’re mistakes that the unflappable France rarely makes. So does Neid stick with the gameplan and take the chance of getting exposed? And can France crack them open if they do?

Tactically, Neid has a tough call. Dzsenifer Marozsan is on most people’s short list for best players in the world, but she was slightly injured coming into the tournament, and bringing her on in a 4-2-3-1 for Melanie Leupolz creates the dilemma that Jill Ellis has: Marozsan is not a natural holding midfielder and will likely go forward more. That would up Germany up for counters, but that is not really France’s strength, either, although Elodie Thomis could certainly be a one-person assassin with her speed.

Bergeroo has gone to a 4-4-2 for this tournament and while Amandine Henry has been fantastic, it’s a tough ask for her to try to help win the midfield 2 vs. 3 (with Camille Abily likely) against a team with the quality of Germany. If they are unable to, that will make Thomis and Louisa Necib defend for long periods of time, and that could spell doom for France, even though its defense has been excellent and is probably the more experienced of the two. Both teams love to get their outside backs forward in the attack, but against such a formidable opponent, will they be a little more cautious against the dreaded counter?

You excited for this one yet? In the minds of most people that watch a lot of women’s soccer, France is among the elite in the world. But the French would love a statement win to cement its place there, and give it a chance to grab its first world title. Its record in these recent games has not been good. In 2011, it was beaten by the United States 3-1. A year later at the Olympics, it was a disappointing 2-1 defeat to Japan in the semifinals, and in 2013, it was a brutal Euro quarterfinal loss to Denmark in penalties. In none of those matches did they keep a clean sheet, and while they have come so far in a short period of time, France has to feel its time is now.

Alas, even without Bartusiak, I think Germany just has too many weapons and is playing too well right now for this to be France’s time yet. Maybe next year in Brazil.