If Alex Morgan ever decides that basketball is her thing, she now has a team to play for.

The Harlem Globetrotters drafted the U.S. women’s national team forward on Tuesday in their annual player draft ahead of the team’s 90th anniversary tour.

Morgan will be forgiven for not being able to accept her No. 13 red, white and blue jersey (no Volt green for the Globetrotters) in person, since she’s a bit tied up preparing for Friday’s Women’s World Cup quarterfinal against China in Ottawa.

[KASSOUF: US looks to stay focused amid criticism  |  China ready for upset] 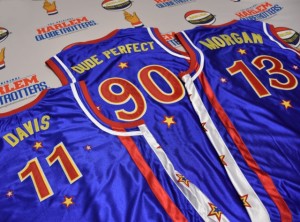 The Globetrotters’ draft is all in jest, of course. Morgan won’t be throwing alley-oops any time soon, but it is still an honor for her to get the nod by one of the world’s most recognizable and entertaining basketball teams.

“Her drive, leadership and experience on some of the world’s biggest athletic stages are some of the attributes the Globetrotters look for in a player,” states the team’s website.

Morgan was drafted for real in 2011, when the Western New York Flash selected her No. 1 overall out of Cal and that year won a second of three straight championships in three different leagues.

Little League World Series star Mo’ne Davis was among the other five players “drafted” by the team.

“When we conduct our draft, we look for outstanding athletes from different sports all over the world that exemplify the Globetrotters’ efforts to provide service, smiles and sportsmanship globally,” said Sweet Lou Dunbar, the Globetrotters’ director of player personnel. “This group of individuals embodies the skill, athleticism and showmanship it takes to be a Harlem Globetrotter.”