Wambach gets warning, not ban, for ref criticism 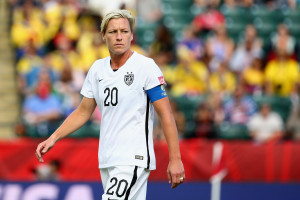 OTTAWA, Ontario — As it turns out, saying sorry can make a World Cup of a difference.

United States forward Abby Wambach has been issued a warning by FIFA’s disciplinary committee for criticizing officiating, but she avoided suspension for Friday’s quarterfinal against China.

Wambach said on Monday that she thought referee Stephanie Frappart “purposefully” handed out yellow cards to teammates Lauren Holiday and Megan Rapinoe knowing that the cautions would get each player suspended for Friday’s quarterfinal.

As first reported by SI’s Grant Wahl, Wambach has avoided suspension, and her quick apology could be why. Wambach apologized for the remarks on Tuesday.

Article 57 of the FIFA Disciplinary Code states: “Anyone who insults someone in any way, especially by using offensive gestures or language, or who violates the principles of fair play or whose behaviour is unsporting in any other way may be subject to sanctions in accordance with art 10 ff.”

“It’s definitely a great question,” Wambach said Monday. “I don’t know if they were yellows. Who knows? It seemed like she was purposefully giving those yellows to the players she knew were sitting on yellows. I don’t know if it was just a psychological thing. Who knows?”

On Tuesday, Wambach backtracked on those comments.

“I’m not in the referee’s head, and that’s something that I definitely take ownership of and apologize for, because I don’t know what the referee is thinking. She is doing the very best job she can.”

U.S. coach Jill Ellis said Thursday that Wambach is available to play 90 minutes if asked to on Friday.